In Depth: How Japan’s Nuclear Disaster Zone Is Emerging as a Clean Power Leader 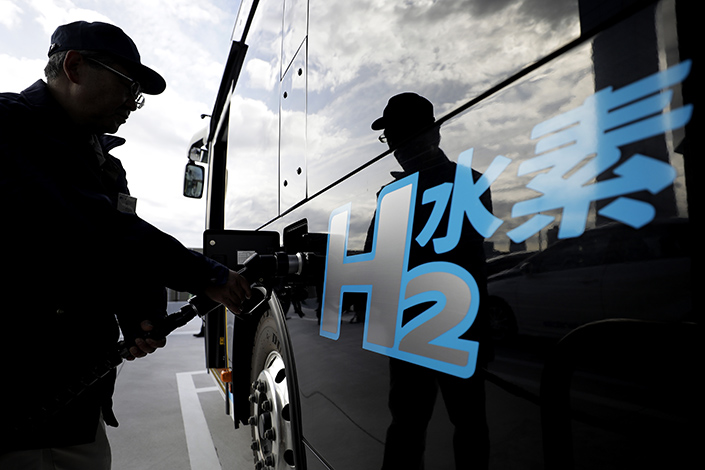 On March 11, 2011, Mr. Ouchi was driving to the post office after delivering vegetables. When the ground shook, the farmer thought he had a flat tire. But when night fell and the streetlights didn’t come on, he felt that the world might be ending.

Later, he learned about the disaster at the Fukushima Daiichi nuclear power plant, which sat on the far side of a nearby mountain.

The nuclear crisis changed the way Ouchi thinks about electricity, saying that before the disaster he “tried not to think about the other side of the switch.”

But since then, the 47-year-old, who saw demand for his crops plummet after the disaster amid concerns about nuclear contamination, became the first solar power farmer in his city.

Ouchi was not the only one doing his part to alter the energy mix of the world’s third-largest economy.

In the wake of the Fukushima disaster, Japan is gradually saying goodbye to nuclear power, pursuing renewable power sources and putting big bets on hydrogen power. All the country’s nuclear plants were taken offline for inspections after the disaster, and most remain mothballed, even as some Japanese utilities are pushing hard for the resumption of nuclear power generation and conservative politicians are in favor of the sector.

But though Japan’s energy mix has changed, it isn’t necessarily getting greener. From 2010 to 2019, the share of nuclear energy dropped from 25.1% to 6.2% — but only half that reduction came from replacement with renewable sources. The other half came from fossil fuels.

That may be set to change as the country, in line with many other nations, sets ambitious carbon goals. Late last year, Prime Minister Suga revealed a plan to cut greenhouse gas emissions in Japan to net zero by 2050.

In December 2020, the Ministry of Economy, Trade, and Industry publicized a “reference” for the country’s 2050 energy mix targets. The plan put renewable energy sources at 50% to 60%. Nuclear power and fossil fuel power generation combined will account for 30% to 40%, and hydrogen and ammonia thermal power generation is expected to reach 10%.

Japanese energy industry expert Takeo Kikkawa told Caixin that the fact the government grouped nuclear power with fossil fuels indicates that “nuclear power has been almost abandoned.” He added that if thermal power generation can achieve zero carbon emissions in the decades to come, nuclear power will lose another reason to exist.

Before the Fukushima crisis, Japan was reliant on nuclear power, and power companies wrote off renewables as unreliable. One symbol of this is that the country’s solar power development was surpassed by its neighbor, China.

But now, Tohoku, the hardest-hit region by the 2011 earthquake, is emerging as Japan’s renewables frontrunner.

Due to Japan’s shortage of flat land, finding sites suitable for renewable energy generation is not an easy task. However, the nuclear disaster actually eased this challenge for the largely agricultural region, which covers six prefectures in the northeast of Honshu Island, including Fukushima.

Takashi Yoshida, president of solar power generator Fukushima Power Co., told Caixin that amid the customer slump that followed the meltdown, “golf courses and stores that had no customers decided to introduce large-scale solar power facilities.”

In June 2020, Fukushima ranked first among Japan’s 47 prefectures in terms of installed solar capacity, with 792 megawatts (MW) and 10% of the country’s solar power plants.

A year after the nuclear accident, the Fukushima prefectural government set an ambitious goal of having a100% renewable energy supply by 2040. Progress is beating expectations, with the proportion now at 40%.

The west coast of Tohoku is also the country’s wind power hot spot. Akita prefecture had a cumulative installed wind power capacity of 646 MW by the end of 2020, the highest in the country for three consecutive years.

Currently, different regional power companies, in joint ventures with foreign players, are vying to build offshore wind power projects near the Akita coast, something that would have previously been unimaginable in Japan’s traditionally regional and monopolistic energy sector. Kikkawa said that a key target for the performance of Japan’s wind power sector is if prices can fall to between 8 yen and 9 yen per kWh and overall capacity can reach 40 gigawatts.

Also giving the local renewables industry an edge is the fact that all 10 of Fukushima’s nuclear reactors are being scrapped, freeing up local transmission lines.

According to Kikkawa, Tepco Power Grid — a subsidiary of the power giant which operated the Fukushima Daiichi plant — is eying an expansion into Tohoku, which could link Akita’s wind farms with the Tokyo metropolitan region, the country’s biggest source of power demand

Prime Minister Yoshihide Suga, an Akita native, recently said in an interview with local media that his home prefecture, is equipped with “the best environment” for renewable energy power generation and that the sector has his active support.

It is also worth noting that the country’s geothermal power industry, one of a few officially recognized “baseload power sources” — a phrase used to describe highly consistent power sources, such as coal plants — is likewise concentrated in Akita.

Japan’s estimated geothermal potential is only second to the U.S. and Indonesia. But the ideal sites for geothermal plants are often already occupied with hot spring resorts and negotiations between the two sides are usually painful.

A Yuzawa city official told Caixin that the geothermal sector has been welcomed by the locals, who’re keen not only on the simple economic boost but also on the prospect of an influx of workers. The city, much like Akita and Tohoku as a whole, has seen its population precipitously decline and age in recent decades.

Besides existing renewable mainstays such as wind and geothermal power, Japan is also working on developing a commercial hydrogen-power sector, though the technology is not yet mature.

The FH2R prides itself on having the world’s largest installed capacity at a single facility, with 10MW. Unlike hydrogen power plants in Europe — also a leader in the development of this technology — FH2R is adjacent to a photovoltaic power plant, making a wider range of experiments possible.

Eiji Ohira, the senior researcher in charge of the project, told Caixin that one of the primary goals of the facility is to ensure the most efficient operations, given the need to control the system while taking both hydrogen demand forecasts and solar power generation forecasts into consideration.

Considering Europe’s ambitious hydrogen goals, Ohira believes the industry is set to take off. “Our goal is to strengthen Japanese technology, so that we will not find (one day) that we only use European-made equipment.”

Alongside offshore wind, hydrogen is increasingly seen as a pillar of Japan’s energy strategy. This ambition, however, faces a range of challenges including high costs and the lack of an international supply chain. These problems extend beyond hydrogen power, for instance affecting automakers’ attempts to develop clean hydrogen fuel cell vehicles.