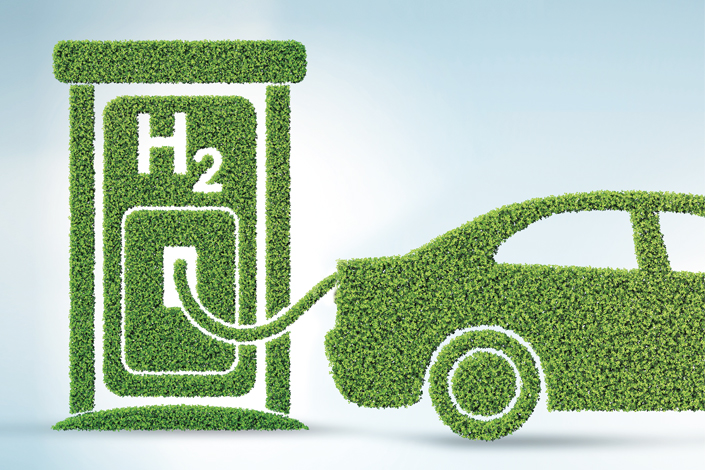 As part of Beijing’s carbon reduction goals, China’s traditional fossil fuel giants are racing to take the lead in hydrogen energy, cities are making plans to develop it as a clean power source, and automakers are developing hydrogen-driven vehicles.

Hydrogen is a clean and potentially renewable fuel. When used in fuel cells, it produces clean electricity by combining with oxygen and creates only water as a byproduct. But extracting hydrogen from fossil fuels is energy intensive and produces massive amounts of carbon dioxide and other pollution. Splitting hydrogen from oxygen in water molecules takes even more electricity. Carbon dioxide is one of the main greenhouse gases causing global warming.

High hydrogen production costs have kept hydrogen-powered cars from reaching a commercialized stage in China and elsewhere. The difficulties of storing and transporting the highly explosive gas add to the costs.

At current market prices, hydrogen to power a fuel cell car in China costs about 70 yuan ($10) per kilogram, estimated Fu Guanyun, a researcher at the National Development and Reform Commission (NDRC), China’s state planner. Fu said that figure needs to come down to less than 40 yuan per kilogram before hydrogen-powered cars can be truly competitive with traditional gasoline-powered autos.

Fiscal incentive instead of purchase subsidies

In 2009, China launched a “10 cities, 1,000 vehicles” program, aiming to select 10 pilot cities and deploy 1,000 new-energy vehicles (NEVs) in each of them annually over three years. In China, NEVs include battery-electric vehicles, plug-in hybrid electric vehicles and hydrogen fuel cell vehicles.

As fuel cells cost more, a hydrogen fuel cell vehicle could get as much as 1 million yuan of subsidies from national and local governments, much higher than subsidies for battery-electric vehicles and plug-in hybrid vehicles. For example, SAIC’s Maxus hydrogen fuel cell wide-body passenger car FCV80 has a list price of 1.3 million yuan, but buyers could get one for as little as 300,000 yuan after subsidies.

The difference showed policymakers that purchaser subsidies have very limited impact in motivating automakers to press for technological breakthroughs. In April 2020, the government eliminated hydrogen fuel cell buyer subsidies and in September rolled out fresh policies aiming to improve the industry’s supply chain and technologies instead.

Under the new policy, local governments that meet certain targets, including lowering the price of hydrogen fuel, increasing the number of hydrogen charging stations, enlarging hydrogen fuel cell vehicle fleets and improving related technologies, will be awarded as much as 1.7 billion yuan as a fiscal bonus.

The new policy is considered the hydrogen version of the 10 cities, 1,000 vehicles program. Five city groups, including the Beijing-Tianjin-Hebei cluster, Shanghai, Guangdong and Henan provinces, have been selected, industry participants told Caixin, although the central government has not published the names of cities engaged in the program.

The main goal of the demonstration program is to achieve domestic production of eight core technologies for hydrogen fuel cell vehicles, said He Guangli, manager of the hydrogen energy department at the National Institute of Clean and Low-Carbon Energy (NICE). The new policy is expected to break the technical bottlenecks facing hydrogen fuel cells, He said.

The breakthrough won’t easy as China’s success in the electric vehicle industry chain cannot be simply replicated in the hydrogen sector, industry experts said. The hydrogen industry chain is more complex, and every aspect of the production chain, including extraction, storage, refueling and transportation, is under great cost reduction pressure.

It is widely expected that technological breakthroughs and applications of fuel cell vehicles will accelerate during the 14th Five-Year Plan period, covering 2021 to 2025, but large-scale commercial application is still too early. In a 15-year plan for new-energy industry released in October, the State Council set the timetable for hydrogen vehicles’ commercial application at 2035.

Green hydrogen is the key

Hydrogen vehicles currently use just 1% of China’s annual hydrogen production of about 30 million tons, NICE’s He estimated. With the further development of electric vehicles, there is limited market space for fuel cell vehicles, according to a hydrogen energy researcher close to China’s policymakers.

China aims to widely use hydrogen energy in sectors such as steel, chemicals, construction, transportation and other fields, where emissions reduction is difficult, the researcher said.

The real hurdle is how to produce green hydrogen — splitting water into hydrogen and oxygen using renewable resources. Only when the front-end hydrogen source is clean, cheap and convenient enough can the application scenarios, including hydrogen vehicles, truly break through the value chain, He said.

Based on the use of renewable resources and carbon emissions, hydrogen is classified into three types: zero-carbon green hydrogen, low-carbon blue hydrogen and high-carbon grey hydrogen. Grey hydrogen is produced from fossil fuels, such coal, and generates carbon dioxide. Blue hydrogen uses carbon capture and storage for the greenhouse gases generated in the creation of grey hydrogen. Green hydrogen — the ultimate clean hydrogen throughout its life cycle — uses renewable energy, such wind power, photovoltaic electricity and hydropower, to produce hydrogen.

At present, China’s hydrogen production mainly comes from dirty sources such as coal, natural gas and industrial by-products. The cost of hydrogen production is similar to that of gasoline and diesel, but it cannot be sustained in the long run because of the associated high cost of environmental controls. Consequently, green hydrogen is crucial to achieving the carbon neutrality goal. To reach that target by 2060, 8% of China’s energy consumption should be supported by green hydrogen, according to projections by the investment bank China International Capital Corp. (CICC).