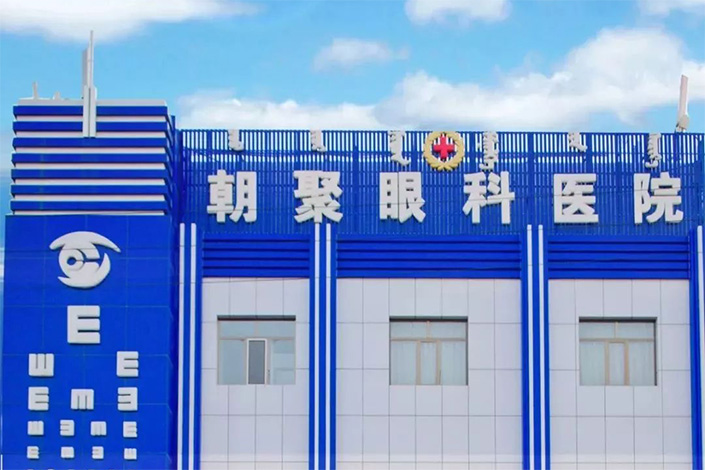 Chinese ophthalmic services provider Chaoju Eye Care Holdings Ltd. is planning an IPO in Hong Kong in the hope of raising as much as HK$1.8 billion ($233.4 million) as it bets on a fast growing market on the mainland fueled by an aging population and younger generations suffering eye strain from using smartphones.

Based in northern Inner Mongolia autonomous region, privately owned Chaoju will issue 170.9 million shares globally, of which 10% will be sold in Hong Kong, according to its prospectus filed to the Hong Kong Stock Exchange on Thursday.

Its shares, which will be priced between HK$9.48 to HK$10.60, will begin trading on July 7, with Chaoju’s market capitalization expected to reach a much as HK$7.3 billion following the listing, it said.

This is just the latest in a series of privately owned ophthalmic hospital operators seeking to raise funds through public listings over the past few years either on the mainland or in Hong Kong as demand for their services soars. In July last year alone, three ophthalmic companies filed for IPOs on Shenzhen’s Nasdaq-style ChiNext board.

The expanding market for ophthalmic services comes on the back of the increasing prevalence of eye disease caused by factors such as China’s aging population and increased use of digital products by young people, according to the prospectus, which cited consultancy Frost & Sullivan.

The number of residents in China aged 60 and above has grown to 264 million by 2020, up 5.44% from 10 years earlier, according to the latest census data released last month, placing greater strain on the nation’s health-care system.

Meanwhile, with an estimated 900 million Chinese smartphone users, the incidence of ocular problems has also dramatically increased. About 90% of teenagers in China suffered from nearsightedness by 2015 compared with just 10-20% of the population 60 years ago, according to a study published last year in the Journal of Medical Internet Research.

Chaoju was ranked fifth among Chinese privately owned eye hospitals in terms of revenue from clinical treatments in 2019, according to Frost & Sullivan research paid for by Chaoju, which was cited in the prospectus.

The company said the share of revenue from consumer services has increased over the past years as more young people sought out corrective procedures such as laser eye surgery. The company’s net profit rose 70.2% to 120.5 million yuan last year.

Chaoju operates 17 ophthalmic hospitals and 23 optometry centers in five northern provincial-level regions, with 261 registered doctors. The company said the proceeds from the IPO would be mainly used to build new hospitals, update existing ones and acquire new hospitals when the time is ripe.

As Chaoju is still in the early stages of growth and its hospitals are mostly concentrated in Inner Mongolia, the company’s estimated valuation after the listing could lag behind other competitors, Albert Yu, an analyst at brokerage Zhongtai International Securities Ltd., wrote in a Thursday note.