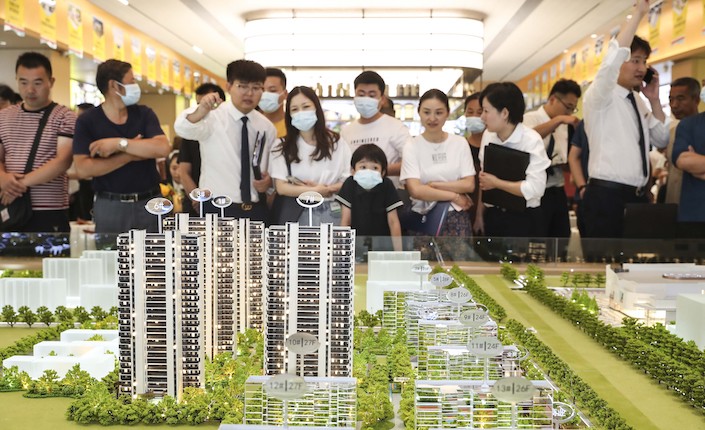 The showroom of a new residential development in Huai'an, Jiangsu province.

The U.S. brokerage lowered its recommendation on the real estate sector in the world’s second-largest economy to “in-line” from “attractive” in a note published Thursday. Strong sales continue, and land sales “haven’t cooled off yet, therefore policy risk is still to the downside,” analysts led by Elly Chen wrote.

China’s property companies are under pressure as Beijing moves to curb leverage in the debt-laden sector which has propelled a record wave of corporate bond defaults this year. Authorities have been attempting to stabilize some of the highest property prices in the world, and concerns are rising over the financial health of China Evergrande Group, the nation’s most-indebted developer.

“We expect government property policy to remain relatively tight, and cities with overheated markets may need to tighten further,” the Morgan Stanley analysts wrote. That may potentially include the introduction of a property tax pilot program and inclusion of commercial paper into ‘three red lines’ evaluation.”

The brokerage also sees China continuing its deleveraging push by tightening funding channels and setting property-related loan caps for lenders. It expects gross margins for developers under its coverage to fall 0.4 of a percentage point in the 2021 fiscal year because of bookings of low-margin projects with high land cost and capped selling prices.

Meanwhile, concern about Evergrande is spilling over into the rest of the offshore high-yield bond market, which is dominated by developers. Premiums on those notes were at their highest since May last year, according to a Bloomberg Barclays index.

Morgan Stanley slashed price targets for 27 companies under its coverage. The biggest cut of 33% was for China Aoyuan Group Ltd. — which it downgraded to equal-weight from overweight. Morgan Stanley reduced targets for Sunac China Holdings Ltd. by 30% and China Vanke Co. by 14%.

“Although valuations are already at trough levels, we see lack of short-term catalysts,” the analysts said.