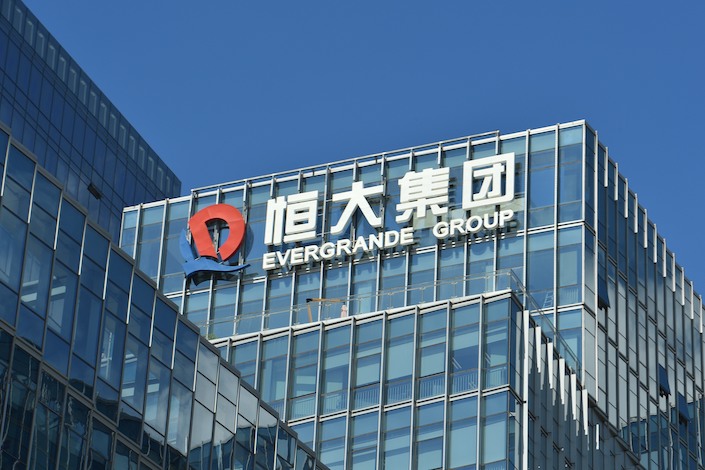 Evergrande said Wednesday that it reduced its net debt-to-equity ratio to less than 100%, meeting one of the three targets.

Moody’s Investors Service downgraded China Evergrande Group’s credit rating by one notch to B2 as the debt-ridden property developer struggles to ease its debt crunch.

"The downgrade reflects Evergrande's weakened funding access and reduced liquidity buffer given its large debt maturities in the coming 12–18 months amid the tight credit environment in China and volatility in the capital markets," said Cedric Lai, a Moody's vice president and senior analyst, in a Wednesday statement.

Concerns over Evergrande’s financial health are mounting as the Shenzhen-based developer, one of the most indebted real estate companies in the world, fights to meet regulatory requirements to reduce its debt mountain.

Beijing last year set “three red lines” to cap major developers’ borrowing as part of a campaign to rein in leverage and reduce risks to the financial system. Regulators set mid-2023 as the deadline to meet the requirements, giving companies a three-year transition period. Evergrande President Xia Haijun said in March that the company is trying to reach the targets by the end of next year.

To meet the regulatory requirements, Evergrande stepped up asset disposals. In June, Evergrande raised money from the sale of internet and property assets to repay offshore bonds. The company also bolstered cash reserves by offering steep discounts on sales of new apartments.

Evergrande said Wednesday that it reduced its net debt-to-equity ratio to less than 100%, meeting one of the three targets. It said it pared total borrowings to about 570 billion yuan ($88 billion) as of Tuesday from 717 billion yuan in December.

While Evergrande and its affiliates haven’t defaulted on any interest or principal payments, concerns mounted over their capacity to continue reducing debt. Last week, Evergrande put aside HK$13.6 billion to repay U.S. dollar bonds due Monday to appease investors. The company said it has no publicly listed bonds due before March 2022.

After the Monday repayment, Evergrande still has about $17 billion of outstanding bonds, all offshore dollar debt, according to company filing.

“Although Evergrande has been reducing its debt to improve its financial stability, the company still faces sizable maturing debt and puttable bonds over the next 12–18 months,” Moody’s said.

Moody’s said it expects Evergrande to continue to focus on generating internal cash to pay maturing debts and fund operations over the next 12–18 months. However, the review for downgrade reflects uncertainty over the company's ability to materially reduce debt and payables to more sustainable levels, given the company’s heightened financial risk.