Opinion: Inflation Is a Global Concern, Not So Much for China 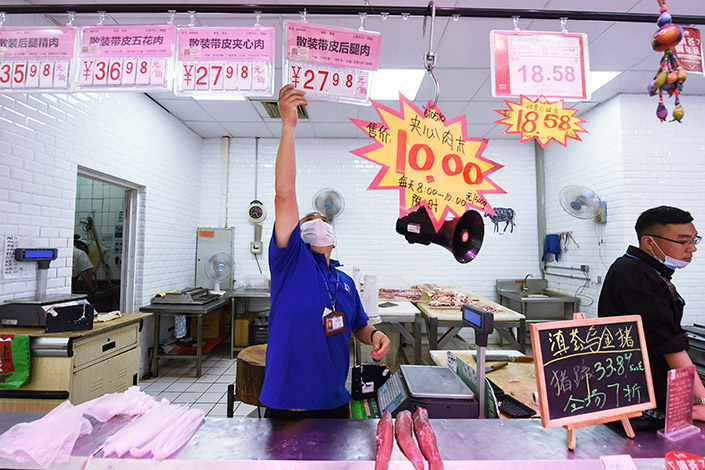 The impact of Covid-19 on the global economy is far-reaching. In the wake of the subprime crisis 13 years ago, the U.S. implemented the most extreme fiscal stimulus in the world, amounting to more than 5% of GDP. This time around, the U.S. fiscal deficit, about 25% of the GDP, is five times as much. Developed economies as a whole have used more than 15% of their GDP this time to stimulate the economy, with central banks intervening to finance the deficit.

This reflects a new way of thinking: debt burden doesn’t matter any more. In China, we are still talking about debt ratio and deleveraging. While the amount of debt in Europe and the U.S. is rising sharply, the interest cost has been falling due to the zero interest rate policy. Fiscal sustainability is thus reinforced, which is also an important reason why it is increasingly difficult for central banks to raise interest rates. Despite the Fed’s emphasis on the “transitory” nature of inflation — partly in order to justify its decision against a rate hike — I’m worried about inflation. But the truth is, the Fed’s attitude is ambivalent. By guiding expectations, it is trying to reassure the market not to worry too much about premature rate hikes.

Inflation in the U.S. is arguably rising across the board, having already topped 5%. PPI is at a 13-year high and CPI is at a 10-year high. Price pressures are seen not just on goods, but also on housing and services as well. We did a study on U.S. import prices which, with the rise of 11% year on year, indicate measurable imported inflation. Until last November, China had been a major player keeping inflation in check in the U.S.; its export prices were largely unchanged while those of most other countries went up 5 to 10 percent. Since last November, however, prices of U.S. imports from China have also increased by 3%.

In a country which is not a reserve currency issuer, the monetization of fiscal deficits could stimulate the economy for a year or two. After two years, inflation or even hyperinflation will come. But Japan has been practicing this policy for 30 years. Prices in Japan are not rising, and the deficit is decreasing as a percentage of GDP after so many years of loose monetary policy. Ultra-easy monetary policy helped reduce the fiscal burden on the government and did not have much negative impact in the long run. This in a way supported the modern monetary theory, so this is a very hot topic. The U.S. is also practicing this new theory.

Will there be across-the-board inflation? This is a critical question. China is relatively well-positioned. On one hand, its output gap is the smallest in the world, so we have relatively high PPI imported from overseas, but CPI stood at 1.3% in May and core inflation was only 0.9%. On the other hand, the pork cycle was reversed this time. Even as commodity prices rose, China’s pork prices were down 30%. This is very good for curbing inflation. In the grand scheme of things, there are global inflationary concerns, especially in the U.S., but inflation is not a big problem in China.

We have also discovered on e-commerce platforms that online retail in China has played a very positive role in curbing inflation. China’s e-commerce now accounts for 25% of retail sales, one of the highest in the world. E-commerce platforms reduce information asymmetry, broaden market boundaries, enable consumers to buy goods available from a wider area, reduce differential pricing by manufacturers, promote market competition, reduce price stickiness and link online and offline activities. We also used JD big data to analyze the impact of e-commerce on pork prices. We compared daily pork prices online with the pork prices released by the National Bureau of Statistics. Pork prices online are less volatile than the CPI. The recent trend is more consistent. So the value of pork is indeed falling, and will continue to fall for a period of time.

Next, I will discuss four major concerns in the second half of this year.

First, whether or not the high growth of exports can be sustained. Exports are the bright spots in China’s economic recovery. Exports to the U.S. have risen about 50%. Exports of labor-intensive consumer goods are accelerating, while those of real estate-related goods are slowing. Electronics products will remain stable, but machinery, manufacturing, investment goods will see higher growth globally.

Behind the data there are a few concerns. New export orders are falling. On the one hand, this may be related to rising prices. After all, export prices to the U.S. rose 3%. But the price of raw materials, including freight rates, rose even higher. The PPI is 9% now, so the pressure on exporters persists. Exporters see robust demand from many countries, but hesitate to raise production due to fears over the renminbi appreciation and rising raw material prices and shipping rates. On the other hand, if the rest of the world further reopens in the second half of this year, uncertainties will arise over how production elsewhere will erode China’s exports.

The second concern is the slow recovery of consumer spending. We did some research using JD’s consumption big data. First of all, we see that the most important factor affecting consumption is wage growth. We compared private sector wages by industry between 2019 and 2020. It is clear that wage growth in some industries has declined, including education, financial services, water conservancy, public utilities, culture and many others. The industry that has seen the most significant wage growth is IT services. Many industries that can be operated online have also experienced moderate wage growth, including the manufacturing sector. Big data analysis also indicates that the per capita spending on online shopping for high-income, middle-income and low-income people was highly divergent from 2018 to 2020. The per capita consumption of high-income people rose the fastest. Per capita spending of middle-income group also surged, but that of low-income people declined. Income differentiation was particularly relevant. The jobs of many high-income people were hardly affected during Covid-19 because they could be performed online, including those in financial services and the tech sector. But the jobs of middle- and low-income groups were mostly related to brick-and-mortar stores. After Covid-19 hit, they might have been unable to work. The impact on their consumption was obvious. Low- and middle-income people account for at least half of the population, so their stagnating wage had a relatively large impact on the overall recovery of consumption.

The third concern is tightening policy. Growth of real estate lending continues to fall. It has dropped to about 10%, close to the lowest point in the real estate downturns in 2008 and 2011. Therefore, the pivotal role of real estate and real estate investment is weakened. Infrastructure investment, including manufacturing investment, has not yet seen a significant recovery.

Next, there are concerns about the trade-off between growth, inflation and risk. Monetary policymakers still go against any substantive interest rate adjustment. But fiscal policy seems to show some signs of retreat. We have seen defaults in the corporate bond market, some of which involves very large SOEs. This is unprecedented. The speed of revenue bond issuance is much slower than the past two years. I don’t know if this is deliberate or because fiscal stimulus is indeed being slowly withdrawn. In fact, this has put pressure on local economies.

Of course, there are also long-term concerns. The first is demographics. Here, the regional disparity is sobering. The more developed a region, the fewer births. This is the international experience. Raising the birth rate will require the effort of the entire society and women, including lowering the cost of child care and investing in public services. There is a lot to be done in order to reverse this trend. Carbon neutrality also puts very big pressure on China. We have to achieve carbon peak and carbon neutrality in 30 years. Energy structure, power supply, steel production and the transition of energy-intensive industries will become important variables in economic forecast in the next two years.