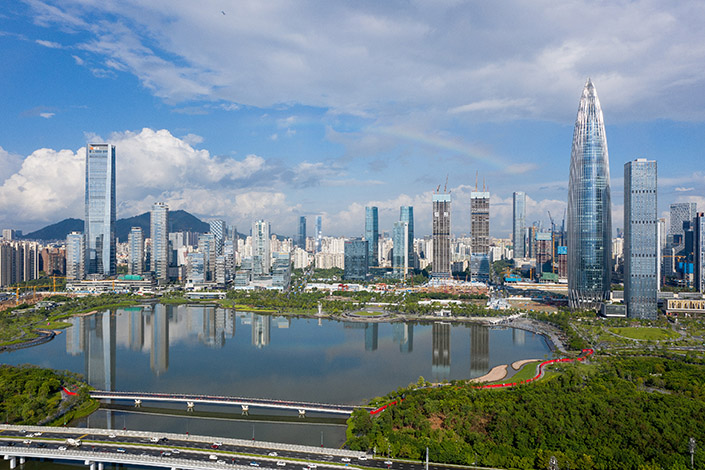 China’s cut in the banks’ reserve requirement ratio will only result in a small flow of cash into the property sector. Photo: VCG

China’s cut to the amount of money banks need to hold in reserve will only result in a small flow of cash into the property sector, previously the primary beneficiary of such moves, with small businesses struggling under high commodity prices set to gain the most, according to analysts.

The central bank’s lowering of the reserve requirement ratio (RRR) for financial institutions by 50 basis points from Thursday, the first since April last year, may provide a boost to the sluggish lending seen over the past few months, analysts at brokerage Cinda Securities Co. Ltd. wrote in a Monday note.

“However, we estimate that the downward trend of residential housing loans will not change, because the strategy is still aimed at offline consumption, service industries, and small and medium-sized enterprises,” it said.

The unexpected announcement by the People’s Bank of China last week will free up 1 trillion yuan ($154.5 billion) in long-term funds aimed at boosting the real economy, especially small businesses that have suffered from rising costs due to soaring commodity prices this year. China is a major importer of commodities such as oil, iron ore and coal.

Technically the move will also give banks more cash to issue housing loans, which was the impetus for a similar cut in January last year, even though that will be limited by government caps on extending credit to the property market in an effort to cool prices.

“Many banks have accelerated their mortgage approvals after the central bank announced the full-scale RRR cut, with some resuming accepting mortgage applications,” an executive from a housing brokerage in Guangzhou told Caixin.

As financial regulators have limited outstanding mortgages as a proportion of banks’ total loans, some bank branches have used up their half-year mortgage quotas early in June and those applying for loans have had to wait for as long as six months, industry insiders have told Caixin.

In June, new residential medium- and long-term loans, which mainly refer to mortgages, were 515.6 billion yuan, down 18.8% from the same period last year, data from the central bank show.

Beijing has issued a series of policies to cool the property market, including setting limitations on property developers’ leverage as well as banks’ property loans and mortgages.

Banks will be subject to different limitations, with outstanding property loans and mortgages by large domestic institutions not permitted to exceed 40% and 32.5%, respectively, of their total outstanding loans.

“The era of large-scale influx of money into the property market is over, and the era of leveraged speculation in the market is gone,” said Li Yujia, chief researcher at the Guangdong Housing Policy Research Center.