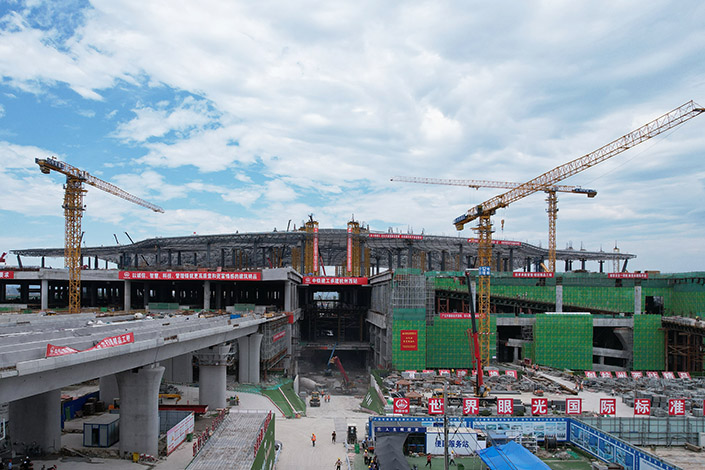 China’s intensifying efforts to rein in the real estate sector, traditionally a pillar of economic growth, have been chiefly driven by the government’s view that stronger-than-expected exports can instead fuel the post-pandemic recovery, said a senior economist.

Adding to Beijing’s tough stance in this move is its pursuit to become less reliant on foreign sources of high-tech products, which will require steering more resources to this sector rather than the real estate industry, Lu Ting, an economist at Nomura Holdings Inc., said at an online conference on Wednesday.

The property industry used to be an important growth driver when China’s economy was not doing well, Lu said. But this time the government has curbed the inflow of excessive financial resources to the real estate sector from both the demand and supply sides, instead of rolling out stimulus policies.

Exports continued to soar in May, rising by 23.4% in dollar terms from the same period in 2019 before the pandemic, fueled by strong global demand as more economies around the world opened up.

The rapid growth in China’s exports leaves the government with more room to promote sustainable and stable development without over-stimulating the real estate and infrastructure sectors, Lu said.

Many big cities have imposed administrative restrictions on home buying, such as clamping down on speculation in the school district housing (学区房) market. Meanwhile, regulators have implemented increasingly strict controls on borrowing by major developers, known as the “three red lines” (三条红线) policy, and also capped banks’ lending to the real estate sector including consumer mortgages.

The policies are aimed at curbing leverage in the highly indebted property sector that could pose a risk to financial stability, and narrowing the wealth gap to ensure long-term social stability, said Lu.

Nevertheless, Lu also warned that downward pressure in the property sector may drag down economic growth in the second half of 2021 and next year.

Adding impetus to the government’s move away from a property-led recovery are its efforts to boost domestic development and production of high-tech products such as chips and basic software and cut reliance on imports amid mounting economic tensions with the U.S., said Lu.

This requires a shift to an economic model that supports those industries, rather than the real estate sector, by injecting more resources such as credit, said Lu.

China has vowed to almost double spending on basic research (link in Chinese) to about 280 billion yuan ($43.2 billion) over the next five years to make major breakthroughs in core technologies and enhance the country’s scientific and technological capabilities.