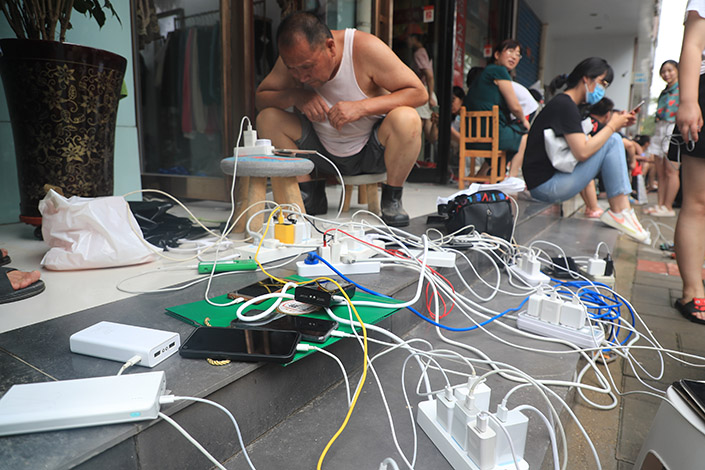 Residents charge electric devices at stores on Thursday in Zhengzhou, where the store owners are providing free chargers. Photo: VCG

Industries in the central China metropolis of Zhengzhou that play a key role in the production of everything from metals and grain to Apple Inc.’s iPhones are moving to resume business even as they count the costs of deadly floods that killed more than 50 people.

Zhengzhou, China’s top transport hub and a major economic center located on the banks of the Yellow River, experienced more than 200 millimeters (nearly 8 inches) of rain in just one hour Tuesday. The city received 617.1 millimeters of rain from Saturday evening to Tuesday evening, nearly equivalent to its annual average of 640.8 millimeters.

The city of 12 million is home to key coal routes and the world’s biggest production base for Apple’s iPhone, with the flooding coming just ahead of the release of its newest device – the iPhone13 – scheduled for the second half of the year.

Hon Hai Precision Industry Co. Ltd., which operates the massive iPhone manufacturing plants that produce about half of the world’s iPhones and is also known as Foxconn, said on Wednesday that it has implemented an emergency response mechanism and would adjust its operations based on the prevailing

While operations at Henan Jiyuan Iron and Steel (Group) Co. Ltd. have basically returned to normal, the company faces difficulty receiving fuel supplies due to transportation disruptions, according to the report.

A Thursday survey conducted by Mysteel on 11 steel mills in Henan showed that 85.7% of blast furnaces were in operation that day, down from 96.5% before the heavy rains.

The Zhengzhou Commodity Exchange, which primarily trades commodity futures, said (link in Chinese) on Wednesday that its operations were unaffected and operating normally.

Analysts predict that the floods may affect food prices, as Henan accounts for about 30% (link in Chinese) of the country’s wheat harvest and is the third most populous province, with a population of nearly 100 million.

Grain prices may edge up in the coming weeks due to supply shortages and transportation disruptions, according to a Wednesday report (link in Chinese) from Nomura Holdings Inc., noting the impact would only be temporary.

In consideration of the region’s importance to the economy, the heavy rainfall and flooding could have a large impact on business activity and inflation in the short term, according to the report.

The transportation of coal to Zhengzhou and its neighboring regions by railway, as well as other key regions via the city, has been “seriously affected,” with the road transport of coal “basically at a standstill,” the National Development and Reform Commission told (link in Chinese) state-run Xinhua News Agency on Wednesday.

The heavy rain has also severely damaged Zhengzhou’s power grid, including high-voltage transmission lines and substations, affecting a total of 473 residential areas, Fan Jianxun, director of the Zhengzhou municipal bureau of Industry and Information Technology, told a news conference on Thursday. Fan pledged to basically restore power supply in the city on Friday.

The official death toll in Henan had risen to 56 as of evening Friday, with five people missing, with the storm front shifting northwest, as the region braced for several more days of severe weather that has already caused direct economic losses estimated at 65.5 billion yuan ($10.1 billion).