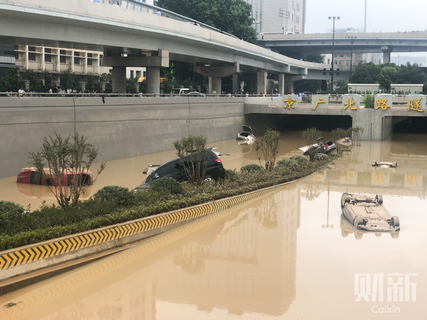 As a heavy downpour Tuesday turned many parts of Zhengzhou into lakes, tunnels along the Jingguang Expressway filled with water, trapping vehicles.

At least two people were found dead as more than 100 vehicles were swamped in an expressway tunnel in Zhengzhou that flooded Tuesday during a record rainstorm.

The Central China metropolis and several other cities in Henan province experienced torrential rain since the weekend, bursting the banks of major rivers and turning streets to rivers.

At least 33 people were killed by Henan’s worst flood in decades as of Thursday, with eight missing, official data showed. The total includes 12 people who died in Zhengzhou’s subway when their train was trapped by rapidly rising water. Parts of the province are expecting several more days of severe weather.

Zhengzhou got more than 200 millimeters (nearly 8 inches) of rain in just one hour Tuesday. The city had 617.1 millimeters of rain from Saturday evening to Tuesday evening — nearly equivalent to its annual average of 640.8 millimeters.

As a heavy downpour Tuesday turned many parts of Zhengzhou into lakes, tunnels along the Jingguang Expressway filled with water, trapping vehicles. The 25 kilometer thoroughfare is a main road running through Zhengzhou from north to south and a backbone of the city’s urban transportation system.

The road’s tunnels were among the worst-affected areas in Zhengzhou, one rescue worker said. One tunnel was still almost completely full of floodwater Thursday afternoon when a Caixin reporter visited the site.

In the north section of the expressway, more than 100 vehicles were found in a 1,835 meter-long tunnel as rescue workers extracted water. Two bodies were discovered, an official source said.

“It only took one or two minutes for the floodwater to completely fill the tunnel,” one maintenance employee told Caixin. The north-section tunnel was flooded after 4 p.m. Tuesday as the rainstorm intensified, the employee said.

The rescue task force dispatched 16 pieces of large pumping equipment to extract floodwater from the tunnels since Thursday noon. The water was as deep as 13 meters in parts of the tunnel, local officials said.