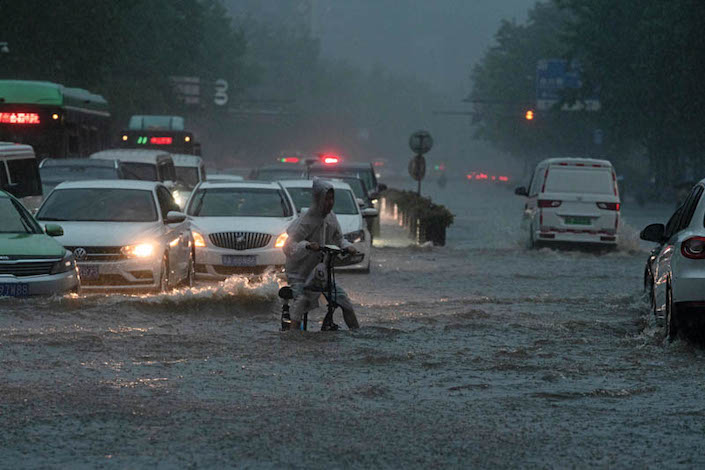 Many parts of downtown Zhengzhou were severely flooded by the record rainfall.

It has been a week since flooding and related disasters triggered by torrential rain ravaged central China’s Zhengzhou July 20, claiming at least 51 lives, based on official data as of July 23.

While mourning the loss of life, it is also important to review the factors leading to the tragedy and reflect how such heavy casualties can be avoided in the face of natural disasters.

It is clear that Zhengzhou was hit by an unexpected and extreme weather event. According to official data, in three days from July 17 to 20, Zhengzhou experienced rainfall equivalent to its annual average of more than 600 millimeters. In about one hour on the afternoon of July 20, the city received a record 201.9 millimeters of rainfall. Such a once-in-a- millennium rainstorm would be disastrous in many of the world’s big cities.

Such extreme weather is rare, especially for inland cities like Zhengzhou. Accurately forecasting strong rainstorms has long been a challenging task. But it doesn’t mean that humanity is completely powerless in face of natural disasters. With development of scientific and technological methods, such as weather satellites and big data analysis, people are increasingly capable of predicting heavy rainfall

In fact, the Zhengzhou Meteorological Bureau issued a top-level red alert for the rainstorm July 19, the day before the deadly downpour. Four more alerts were issued July 20 before 4 p.m. when the rain intensified. The meteorological department suggested temporary suspension of public gatherings, schools and businesses — the so-called Three Suspensions.

But a Meteorological Bureau warning doesn’t have any enforcement teeth, serving instead as a reference for the public and for government agencies. Under Chinese rules, a formal Three Suspensions order must be issued by government departments — in most cases the local government’s emergency task force for flood control. That means it takes an administrative procedure for the Meteorological Bureau’s red alert to be turned into a formal suspension order.

For instance, according to a 2018 Beijing municipal government regulation, the city government can enact the highest Level I emergency response when a red alert is issued by the meteorological department. Following an emergency response order, government departments and organizations can mobilize resources for disaster control while schools and businesses can adopt flexible working hours.

Regulations in Guangdong and Zhejiang, where typhoons and torrential rains occur frequently, are similar.

Caixin was unable to find related rules in Zhengzhou’s existing regulatory documents for flood response. But according to other localities’ practices, the government should have enacted the Level I emergency response following five red alerts from the meteorological department and should have ordered a formal suspension of social activities.

It wasn’t until 5 p.m. July 20 that the social media account of the Zhengzhou government recorded a Level I emergency response, up from the previous Level II. By then the worst period of the rainstorm had already passed. No public information could be found on any official Three Suspensions order on or before July 20.

It is still unknown to the public why Zhengzhou responded so slowly to the torrential rain. It is probably due to a lack of experience for city authorities in dealing with such heavy rainfall as they have rarely seen, or it could reflect the government’s concerns over striking a balance between safety and costs, experts said.

In a city with millions of people, the subway is often the only option for urban commuters when heavy rainfall paralyzes road transport. But in Zhengzhou, the subway system turned out to be a fatal choice.

According to official data, 14 people were confirmed dead as of July 26 on the subway Line 5, as floodwater filled underground tunnels and trapped hundreds of passengers on carriages. The official investigation of the incident is still underway, but many have questioned why the subway system didn’t halt operations when the flood hit.

City authorities said heavy rainfall swamped a subway carriage parking area near the Shakoulu station on Line 5, where the trains were trapped July 20. Floodwaters breached defensive barriers around 6 p.m. and rushed underground through the entrance for trains. The whole subway system was suspended 10 minutes later.

Ten minutes could be crucial for the floodwater to reach the Shakoulu station and trap the train. According to surviving passengers interviewed by Caixin, the train had three emergency stops as it rolled toward the Shakoulu station before 6 p.m. It was eventually stranded without reaching the station.

Experts said that under such extreme weather conditions, the subway operator should have the authority to halt operations to ensure safety. The newspaper Southern Weekly cited a safety official with the Zhengzhou Metro as saying they maintained operations in hopes of giving commuters a travel option. Although the subway company can halt the system when floods enter the tunnel or affect power supply, an official suspension order still requires approval from city authorities, the official said.

Official investigation of the incident has not yet been completed, but the catastrophe in Zhengzhou sounded alarms for city officials on managing modern cities amid increasingly extreme weather incidents.

When such events occur, they can be a total disaster for victims and their families. What’s needed is an institutional arrangement that builds a smooth chain from disaster forecast to warning and emergency response to effectively dealing with incidents to control losses.

Changes are in the making. On July 21, the Ministry of Transport issued a notice ordering transport operators to inspect their capability for managing severe floods and improve emergency response plans. On July 26, the National Development and Reform Commission published an emergency notice on strengthening safety protections for important urban infrastructure. In case of extreme weather and other abnormal conditions, cities must immediately enact the highest-level response.

The Standing Committee of the National People’s Congress is revising the Emergency Response Law and making the revision one of the top lawmaking priorities following the Covid-19 pandemic. It is expected that the latest revision will further empower the law and enhance China’s capacity to manage disasters.

The authors are reporters for Caixin Media.