By Cai Xuejiao and Wang Zili 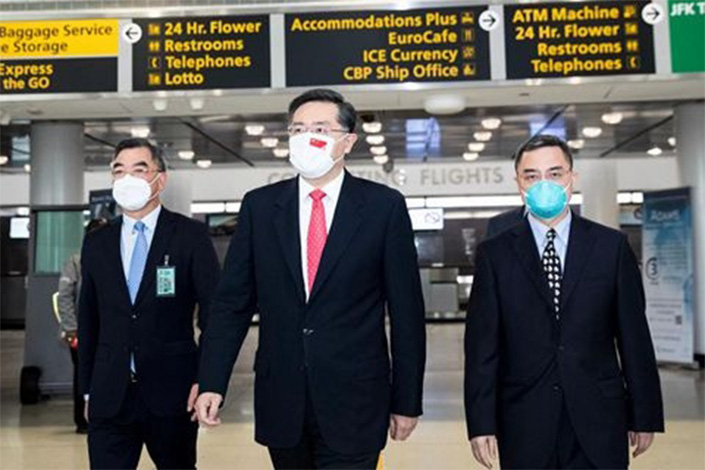 China’s new ambassador to the U.S., Qin Gang, a veteran diplomat with extensive experience in China-Europe relations and a trusted aide to President Xi Jinping on diplomatic protocols, has vowed to “endeavor to bring China-U.S. relations back on track.”

The naming of China’s new top envoy to Washington had long been speculated on prior to his arrival. Qin was named in late April as ambassador to replace Cui Tiankai who had eight years in the post, according to a Wall Street Journal report.

Citing sources, media reported Tuesday that Qin was headed to Washington to take up the post, though Zhao Lijian, spokesperson for the Ministry of Foreign Affairs, declined to confirm his appointment at a regular Tuesday press briefing.

Qin arrived in the U.S. just days after U.S. Deputy Secretary of State, Wendy Sherman, finished talks with Chinese officials, including Foreign Minister Wang Yi, during a two-day visit to the North China city of Tianjin. During the meeting, Xie Feng, a vice foreign minister, said the U.S.-China relationship is “in a stalemate and faces serious difficulties.”

Qin’s arrival has ended the rare and long absence of Chinese and U.S. ambassadors in the two countries’ capitals. Cui Tiankai, the longest serving former Chinese ambassador to the U.S., left Washington and returned to China in June.

As the 11th ambassador of the People’s Republic of China to the U.S., Qin, however, has more experience with European affairs. Prior to the role, he had been a vice foreign minister since 2018, overseeing Europe-related issues, information, and protocol.

China sent veteran diplomat Zheng Zeguang, who has focused on U.S.-related issues in the past two decades, to serve as the new ambassador to the U.K. in June.

Born in 1966, Qin, a Tianjin native, graduated from Beijing’s University of International Relations in 1988 and started his career working at the Beijing Service Bureau for Diplomatic Missions. He then held roles at the Foreign Ministry’s now-defunct Department of West European Affairs and the Chinese Embassy in the U.K.

Qin has served as Foreign Ministry spokesperson twice between 2005 and 2010, and 2011 and 2014. His remarks during press briefings have been remembered as “assertive and direct” and setting him apart from other diplomats, according to a state media report citing an article from his home university.

Domestic media has noted Qin’s diplomatic style as “tough but wise,” while the Wall Street Journal in its April report described him as a “measured career diplomat.”

At a press briefing in February, responding to a German reporter’s question on China’s purported wolf-warrior diplomacy, Qin said the primary duty of China's diplomacy is to defend the interests and dignity of the country, and diplomats should say no to attacks.

Countries and people who “smeared and defamed China” are “evil wolves,” he said.