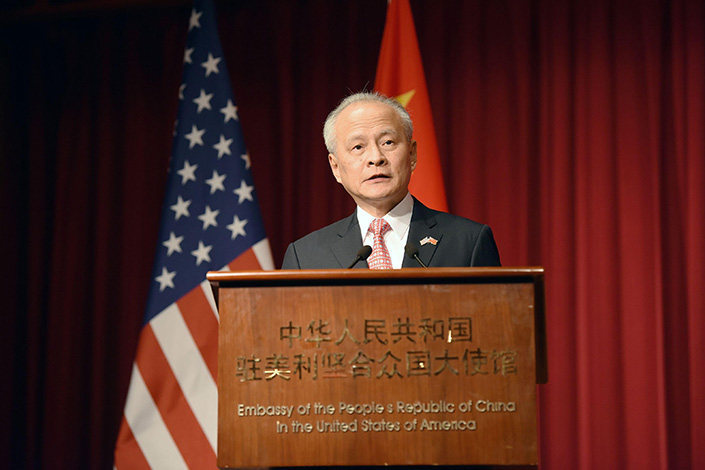 Chinese Ambassador to the U.S. Cui Tiankai is to leave Washington and return to China after serving in his post for eight years.

In a farewell letter to “overseas Chinese” in the country, Cui confirmed his departure and expressed gratitude. He also wrote that Sino-American relations are at “critical crossroads” as “U.S. policy toward China is undergoing a new round of restructuring, facing a choice between dialogue and cooperation or confrontation and conflict.”

In the letter dated Monday, he also said that overseas Chinese should promote and contribute to the healthy and stable development of bilateral relations as well as “defending your rights and interests for survival and development in the United States.”

Veteran diplomat Qin Gang has reportedly been chosen as Beijing’s next envoy to Washington, according to a Wall Street Journal report in late April. Qin previously worked at the foreign ministry’s now-defunct Department of West European Affairs and the Chinese embassy in the U.K.

Cui is the 10th ambassador of the People’s Republic of China to the U.S. and the longest serving envoy to the country since the two countries established diplomatic ties in the late 1970s. He had been in his post since April 2013, serving through the Obama, Trump and Biden administrations. The 68-year-old previously served as China’s vice foreign minister and ambassador to Japan. He also worked at the ministry’s Department of Asian Affairs.

During Cui’s tenure, bilateral relations between the world’s two biggest economies worsened, especially after the Trump administration stepped up trade pressure on China, leading to the two countries slapping tit-for-tat tariffs on each other’s goods.

Cui called for a balanced approach to resolving trade disputes that addresses the concerns of both sides. He also reportedly visited the White House often and held conversations with President Donald Trump’s senior advisor and son-in-law Jared Kushner.

Cui’s departure comes as the new U.S. administration under President Joe Biden reviews its China policy. Since late May, senior officials from Beijing and Washington have held several virtual meetings on trade and investment issues.

Cui accompanied Politburo member Yang Jiechi and Foreign Minister Wang Yi at a high profile meeting with U.S. officials in March in Alaska, which became an open show of disagreement between the two sides.

Earlier this month, China appointed Zheng Zeguang as the new ambassador to the U.K., replacing Liu Xiaoming after 11 years in the post, making the People’s Republic’s longest serving envoy to the European country.