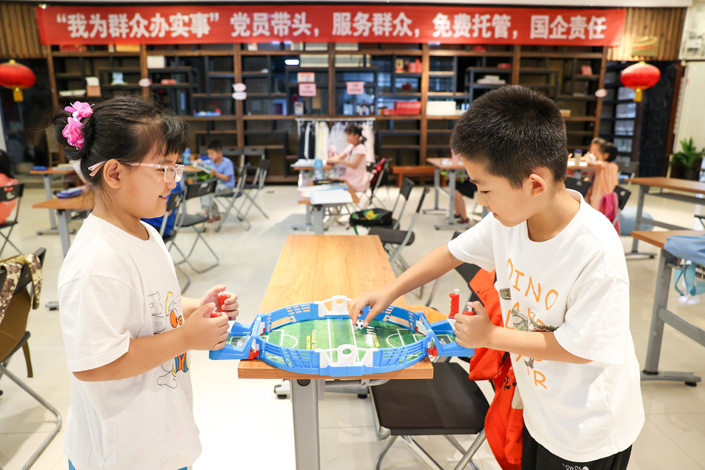 Chinese experts have called for the introduction of a child welfare law, emphasizing the state role in childrearing to reduce burdens on families and to cope with a stubbornly low fertility rate.

The country should establish a unified welfare system for children, Xu Yanli, a professor at China University of Labor Relations, told a forum recently. She also suggested launching a specific law on children’s welfare to address deficiencies in the current family support system and to boost population growth.

Noting the “profound changes” taking place in child-rearing demographics and family structures, Xu said it was urgently necessary to shift the major responsibility in raising children to the government from parents to “truly” reduce the burden on families. She was taking part in a forum on child welfare that was part of an academic conference held in Beijing from July 24 to 25.

China’s birth rate has been below the replacement level of 2.1 since the early 1990s. The 1.4 billion-strong nation is struggling to boost its birth rate after its seventh national census showed that the number of newborns fell for four straight years to 12 million in 2020. And despite Beijing’s recent three-child policy change, the costs of childcare, education and housing deter many couples from multiple children.

Nearly a third of more than 100,000 respondents (30.7%) in a yet-to-be published survey, which Xu presented during the forum, said they have deferred having children because they’re worried about the financial pressures of raising them, while 41.6% of those surveyed said they didn’t have a second child for the same reason.

In response, local authorities have started taking actions, such as offering monthly subsidies to families with two or three more children. However, Meng Ke, an associate professor of Tsinghua University, said such subsidies have a limited impact on encouraging more kids because they do not help women solve the ongoing issues of the declining income after childbearing and reentry into the labor market.

In addition, there’s still a lack of “high-level” legislation concerning children’s welfare, making it difficult to form a universal social welfare system for children of all ages, experts told Caixin.

In 2019, the Ministry of Civil Affairs created a new department to promote policies related to child welfare, including protecting orphaned and abandoned children and improving the healthcare and social service system for kids left behind by working parents in rural areas. However, that department lacks powers to coordinate child welfare policies made by different government sectors, Xu said.

A child welfare law will help the country more fully realize its responsibilities, said Wu Pengfei, a professor at Shanghai Maritime University. Beyond families themselves, the state should shoulder greater guardianship responsibilities, protecting children from all kinds of harm and managing to meet the needs for physical and mental health development of children.

This philosophy was echoed by Su Yanjie, an associate researcher from the Chinese Academy of Social Sciences. Su said the legislation should clarify the nature of family obligations, delineate departmental responsibilities and their boundaries and then establish accountability mechanisms.