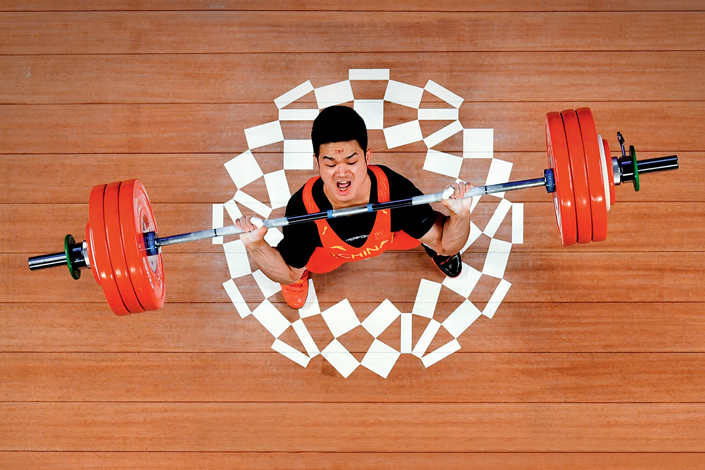 The Tokyo Olympics will no doubt be remembered like no other after it opened July 23 in a mostly empty stadium following an unprecedented one-year delay caused by the Covid-19 pandemic.

With a colorful but subdued ceremony, the games began amid a mixture of excitement and fear of a virus resurgence in Tokyo. The two-week event, now at the midpoint, is a major test for organizers as the coronavirus has brought profound changes to the way international sporting events are held. For the Japanese government, the success of the Olympics also has political and economic implications.

The Tokyo Olympics, originally scheduled for summer 2020, was the first in the 120-year history of the modern Olympics to be postponed. It also emerged as one of the most controversial sporting events in recent years, buffeted by a series of scandals that led to high-profile resignations as well as debates over whether even to carry on with the games during a pandemic.

The decision to do so reflects the powerful financial forces that controversially and increasingly drive the Olympics, experts say. While the pandemic guarantees that the Olympics will leave Japan awash in red ink rather than the glow of economic benefits as once expected, calling them off would have been even more expensive. The ramifications for future games may be felt for years to come, starting with the Beijing Winter Olympics next February.

Polls before the opening of the Tokyo games found that about 70% of the Japanese public opposed launching them in July. Roughly 10,000 of the 80,000 volunteers originally scheduled to help at events quit. Even as the 3½-hour opening ceremony unfolded inside Tokyo’s Olympic Stadium, hundreds of protesters gathered outside chanting to stop the games.

Shortly before the event began, Tokyo entered its fourth coronavirus state of emergency, with restrictions on public gathering and business activities. On July 22, Tokyo reported 1,979 new daily infections. The figure rose to a record 3,000 July 28 and continued climbing. As of July 28, organizers reported 174 coronavirus infections linked to the games, including athletes, staffers, reporters and volunteers.

“I can’t understand why the Olympics are still being held under such high risks,” said a Tokyo college student who dropped out as a volunteer.

When Tokyo won the bid to host the 2020 Olympics in 2013, the Japanese government framed the event as a symbol of Japan’s recovery from the catastrophic 2011 earthquake that struck eastern Japan and shook the entire economy.

Then-Prime Minister Shinzo Abe said he saw the 2020 Olympics as “a tremendous opportunity for Tokyo and for Japan to shine at the very center of the world stage.” Abe projected that infrastructure construction and tourism related to the games would give a boost to Japan’s struggling economy.

At the time, the Japanese public shared those expectations. Polling by the broadcaster NHK showed that public support for the Abe administration surged 2 percentage points to 59% after the announcement of Tokyo’s winning bid. Many may have expected the 2020 Olympics to repeat the success of the 1964 games in Tokyo, which marked Japan’s return to the international community in a post-war economic miracle.

But the pandemic changed everything. After a long debate and postponement of several high-profile sporting events, the International Olympic Committee (IOC) and the Tokyo 2020 organizing committee agreed in March 2020 to reschedule the games. The IOC had never delayed the Olympics by a year or more, though the games were canceled during world wars in 1916, 1940 and 1944.

Postponing the Olympics was a difficult decision for the Abe administration, which was counting on the event to bolster public support for the government and reinvigorate a shrinking economy. Abe resigned in August 2020 citing health as Japan struggled to curb the outbreak.

A series of controversies and scandals also eroded public confidence. Ceremony director Kentaro Kobayashi was fired before the opening after a decades-old video surfaced of him joking about the Holocaust. A composer also resigned following the emergence of past interviews in which he discussed tormenting disabled classmates at school.

Abe’s successor Yoshihide Suga also faced mounting pressures over resuming the games. Before the opening, public support for the Suga administration declined to as low as 35.9%, 8% lower than a month earlier. About 87% of the Japanese public expressed concerns over holding the games during the pandemic.

Despite rising public calls for cancellation, the Suga administration insisted on holding the games. Experts said it was partly because Suga couldn’t afford to take responsibility for canceling such a prominent event. The decision also reflected organizers’ hopes that the excitement of the Olympics would offset the widespread opposition.

The games were significantly downsized for virus control. Only 12 state leaders attended the opening ceremony, compared with the more than 100 expected by the organizers. The number of spectators attending the ceremony was nearly halved. About 10,000 athletes from more than 200 countries and regions are competing in 339 events during the half-month Olympics. Almost all the competitions will be held without an audience.

“This is the light at the end of the dark tunnel,” IOC President Thomas Bach said in his welcoming speech at the opening ceremony. “It is very different from what all of us had imagined. But let us cherish this moment because finally we are all here together.”

The opening of the Tokyo Olympics followed long battles among different parties involved in the games, including the IOC, the Japanese government and sponsors, debating when and how the games should be conducted.

Japan spent more than $26 billion preparing Tokyo for the games, according to some estimates. With about 600,000 foreign visitors and more than 11,000 athletes expected to attend, the games were projected to generate $1 billion in ticket revenue. Japanese companies poured enormous amounts into expanding their visibility at the event, signing a record $3.3 billion of sponsorship deals.

But the pandemic disruptions make the investment hard to recover. Yasutoshi Nishimura, the minister in charge of economic and fiscal policy, said there is no expectation of any economic benefit from the event. Instead, the focus will be how to reduce losses.

Research by economist found that even the no-spectator games would be an economically reasonable option for the Japanese government and the IOC compared with cancellation. The sale of broadcasting rights should help organizers recoup some losses, although the no-spectator policies will reduce revenue by 146.8 billion yen ($1.34 billion) due to lost ticket sales and reduced visitor spending. By comparison, a cancellation would lead to 1.8 trillion yen of losses.

The budget for the Tokyo Olympics ballooned from the originally planned 734 billion yen to 1.64 trillion yen by the end of 2020, partly due to venue maintenance costs caused by the pandemic delay and related virus control spending. Some experts predicted that overall spending on the Tokyo games would exceed 3 trillion yen, making it one of the priciest Olympics.

Media estimated that about 60% of total spending would come from Japanese taxpayers, with the rest from sponsors, revenue generated from the games and IOC funding.

Broadcast rights are the major money spinners for the Olympics and the main motive behind the IOC’s determination to go ahead with the games, experts said. Olympic broadcast rights contributed more than 73% of the IOC’s revenue between 2013 and 2016.

Rights to air the Tokyo games were estimated at more than $3 billion. If the games were canceled, the Japanese government might have had to pay $1.36 billion to the IOC as compensation, experts said.

Although the opening of the no-audience games means huge losses in ticket sales and advertising revenue for sponsors, the Tokyo games will still generate some long-term benefits for the Japanese economy such as potential tourism after the pandemic wanes, experts said.

The more important gain will come outside businesses as the games will put Japan into the global limelight and enhance its international influence, said Jiang Yuechun, an international relations expert at the China Institute of International Studies.

Cities’ interest in hosting the Olympics was in decline, partly reflecting ballooning costs. In 1997, 11 cities participated in fierce competition bidding for the 2004 games, which were hosted by Athens. But in 2017, only Paris and Los Angeles were left in the final bidding for the 2024 games as the only three other competitors withdrew over financial and public opinion concerns. Paris eventually won the event.

Only a few host cities, including Beijing for the 2008 Games, made money from Olympic Games due to massive spending on facilities construction and maintenance. Most cities were mired in debt long after the games, experts said.

For example, Athens’ spending on the 2004 games surged to $16 billion from the originally planned $3 billion. Some economists said heavy spending on the Olympics was a main trigger for Greece’s 2009 debt crisis. It took Montreal 30 years to repay all the debt it took on for the 1976 Olympics.

Except for those already equipped with sound sports facilities, it is rare for cities hosting the Olympics to break even, said Stefan Norgaard, a former city planning official in New York.

Public concerns over how hosting the Olympics may worsen wealth disparity in some developing countries and the financial opacity of the IOC also are also adding doubts to the games.

Global Athlete, an international athlete-led movement, in a 2020 report criticized the IOC for spending only 0.5% of its revenue directly on athletes. The IOC denied the report and said 90% of its revenue was spent on athletes and global sports development. But the committee hasn’t released detailed reports on its financials.

The IOC made a major overhaul in 2019 to the bidding process for the Olympics to reduce costs and attract more hosts. Among the changes was the removal of a clause in the Olympic Charter requiring that hosts be selected seven years in advance. Changes also include the creation of future host commissions that will evaluate potential hosts well before any official candidacy is launched.

Two days before the Tokyo Olympics opening, Australia’s Brisbane was selected as the host for the 2032 Summer Olympics, the first chosen under the new bidding regime.

A former IOC official said the overhaul mainly aims to add flexibility to the bidding process and reduce political influence on the games.

Some experts suggested more aggressive changes to reduce pressures on the hosts, such as allowing several cities to co-host an event. Such an approach would grant countries with less financial strength to participate in organizing the games, they said.