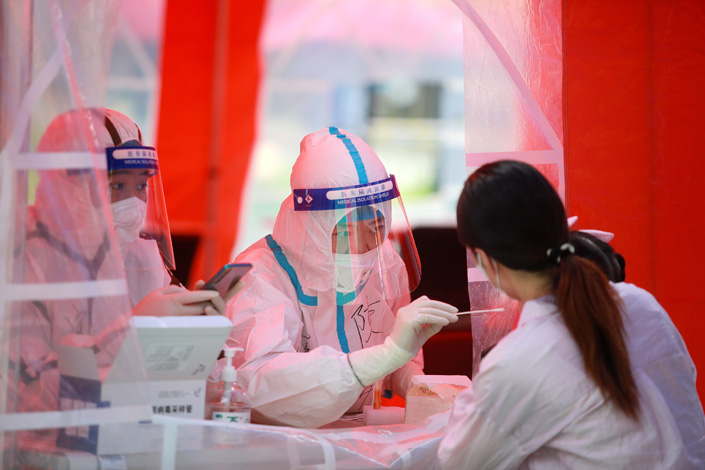 Authorities in Yangzhou, East China’s Jiangsu province, are scrambling to contain the latest Covid-19 outbreak that has infected nearly 500 people over more than the past two weeks.

The outbreak, which mainly spread from a mahjong parlor and a Covid testing site, has forced local authorities to raise the risk levels in several dozen areas and carry out its seventh round of mass testing.

Eight officials have been punished (link in Chinese) for failure to control the test site cluster, according to the city’s disciplinary watchdog.

Vice Premier Sun Chunlan urged local authorities on Wednesday to find the gaps (link in Chinese) in their epidemic prevention and control work, to strictly order residents in medium and high-risk areas to stay at home and to properly arrange Covid-19 testing to avoid more clusters of infections.

The same day, Yangzhou reported 37 locally transmitted cases, bringing the total outbreak tally to 485. Of the cases, 14 were critical and 23 were severe, Wang Jinsong, deputy director of the city’s health commission, said at a press conference Thursday.

The Yangzhou outbreak began on July 27 when a 64-year-old woman, surnamed Mao, tested positive for Covid-19. She has since been detained by police after it was found she had concealed her history of travel to Nanjing, where a recent flare-up of the delta variant has infected hundreds and spread to other parts of the country. Authorities have found that Mao frequently visited several crowded locations, such as restaurants, markets and mahjong parlors, from July 21 to 27 in Yangzhou.

On Aug. 3, Jiangsu closed more than 45,000 mahjong parlors, chess rooms and other indoor venues due to the outbreak. Most of the recently confirmed cases were related to mahjong parlors, including one person who caused a cluster of infections at a village testing site, official reports show.

That patient, surnamed Wang, was found to have visited the testing site before being confirmed with Covid-19 on Aug. 1. Wang has passed the virus on to at least 42 residents, most of whom were infected from July 29 to Aug. 2 at the site, Caixin has learned.

Multiple villagers told Caixin the site was “very chaotic” on July 29 as many test takers lined up without keeping a 1-meter distance from each other. At the same time, most of them were elderly and unfamiliar with the testing procedures, while no staff member was maintaining order.

On Sunday, the city’s disciplinary watchdog said in a statement that the irregular setting of the test site and its chaotic organization led to the cluster. Wang has been put under investigation for “serious violation of the law.”

The Yangzhou outbreak involves a large number of elderly residents, with the oldest being 89 and the average age being 63, said Zhu Limei, an official from Jiangsu’s disease control and prevention center. As most of the seniors don’t own a mobile phone, it has been more difficult to trace their movements and contacts.

As many elderly people have underlying health conditions, they’re more likely to develop a severe Covid-19 case, a doctor who is treating cases at a local hospital told Caixin.

The vaccination rate of Yangzhou’s seniors was relatively low in mid-July at less than 40%, although the city had administered 4.3 million doses of Covid-19 vaccines in general, local media reported.

China on Wednesday reported (link in Chinese) 61 locally transmitted cases, down from 83 a day earlier, including 38 in Jiangsu, according to the National Health Commission. Except for the Yangzhou cases, another was found in the provincial capital of Nanjing, whose outbreak started at an international airport.