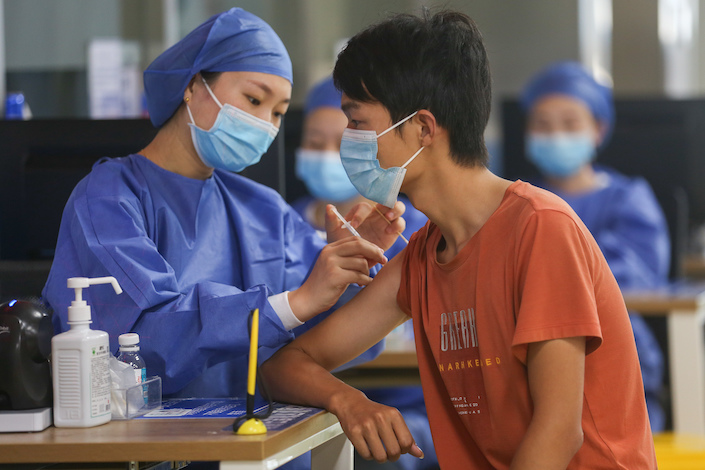 A resident in Nanchang gets a Covid-19 vaccination Aug. 27.

China’s Ministry of Education banned local requirements that students be vaccinated against Covid-19 before returning to school, stressing that inoculations should be voluntary.

Earlier this month, the ministry urged local authorities across the country to promote vaccination of all eligible students below the age of 18 amid the recent domestic outbreaks but said the shots must be given only with the consent of students or their guardians.

Recently, however, multiple local authorities mandated vaccinations for students and their parents as a requirement for returning to school. Some cities proposed to include vaccinations in personal credit records.

The northeastern city of Jilin recently banned unvaccinated people from entering government facilities, banks, hospitals, hotels, restaurants and public entertainment venues and from using public transportation. A county in Henan province and a city in Guangxi province recently required students and their family members to have vaccination proof before they could be admitted to schools.

Several cities issued regulations holding unvaccinated people accountable for causing others to become infected. Under pressure, some people were forced to get shots even though they had underlying health conditions making them not suitable for vaccination.

The National Health Commission repeatedly emphasized that Covid-19 vaccinations are voluntary and do not constitute a compulsory legal obligation.

Experts also said the inclusion of vaccinations in personal credit records and holding unvaccinated people accountable for infecting others have no clear legal basis.

According to China’s Infectious Disease Prevention and Treatment Law, a confirmed patient has a certain obligation to maintain public health, but the causal relationship between vaccination and infection is not clear, said Wang Xu, a law professor at Renmin University of China. Punishing people for not being vaccinated will increase the burden on citizens, Wang said.

As of Thursday, more than 889 million people were fully vaccinated in China, with more than 2 billion shots of domestically produced Covid-19 vaccine administered, an official at the National Health Commission said Friday at a press conference.

Shao Yiming, a researcher at the Chinese Center for Disease Control and Prevention, said China’s relatively low numbers of new cases showed that the country’s existing vaccination and disease control policies are effective at curbing the virus’s spread.

China’s central government previously set a goal to vaccine 40% of its 1.4 billion population by the end of June. To ensure the timely completion of the task, local governments have come under heavy pressure. A health official at a county level government told Caixin that officials would be held accountable for not reaching vaccination targets.

The vaccination rate target proposed by the National Health Commission is just policy guidance, not a mandate, Wang said. For local governments, requiring vaccinations should be an exceptional measure used only in emergencies, he said.