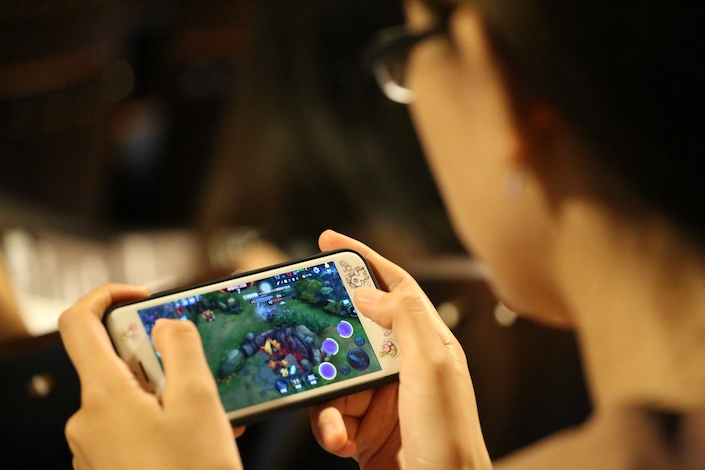 A gamer playing Tencent’s Honor of Kings on mobile phone.

China limited the amount of time children can play video games to three hours a week, a dramatic blow to the world’s largest mobile gaming market as Beijing continues to crack down on large tech companies.

According to new guidelines from the National Press and Publication Administration (NPPA), online gaming platforms can allow users under the age of 18 to play only from 8 p.m. to 9 p.m. Fridays, Saturdays, Sundays and public holidays, and never during the school week.

The stringent limits on youth gaming time will reduce video gaming companies’ user activity and income, though they maintain that minors account for only a small portion of their revenue. Shares of Chinese gaming stocks plunged Monday in the United States with NetEase falling 3.4%, Bilibili dropping 1.59%, and Tencent Holdings Ltd. down 1.1%.

Beijing is conducting a broad crackdown on China’s tech giants and the tutoring industry, hammering Chinese shares traded at home and abroad.

With increasing penetration rates for mobile devices, teenagers have easy access to electronic devices. In the absence of guidance from guardians, there are risks that teenagers using adult IDs will bypass registration restrictions, indulge in games and overspend, the agency said.

The authorities signaled a crackdown on the gaming industry earlier this month when a state newspaper published an article criticizing what it called the “spiritual opium” of gaming addiction.

The article in the Economic Information Daily, a newspaper affiliated with the official Xinhua News Agency, said gaming addiction was harming children’s academic and personal development. The piece cited a government report published last month that found that 62.5% of Chinese minors often play games online, and 13.2% of children play mobile games for more than two hours a day.

The article singled out Tencent’s market-leading title Honor of Kings, describing it as “the most popular online game among students” and citing an unnamed survey respondent who said some classmates played it for as long as eight hours a day.

Under 2019 rules, China limited the amount of time under-18s could play video games to 1.5 hours on ordinary days and three hours on holidays. But many parents complained that the limitation was too lenient, an NPPA official said.

Under the new rules, gaming companies are required to ensure they have put real-name verification systems in place and are barred from providing service to users without real-name registrations, including those logging in as guests.

Regulators will ratchet up checks of how gaming companies enforce restrictions on playing time, real-name verification and in-game purchases. The regulators also said parents and teachers play key roles in curbing gaming addiction and asked them to work together create an environment conductive to the healthy growth of minors.