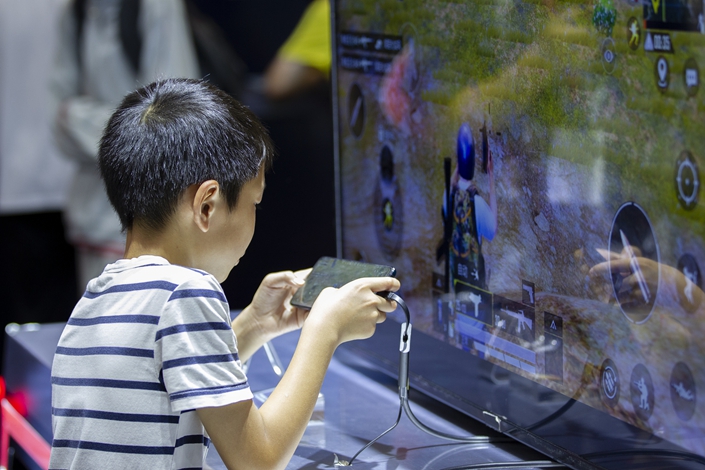 A child plays an online game at a gaming industry event in Shanghai on Aug. 2. Photo: VCG

One of China’s main game regulators has laid out new guidelines for minors, including limits on play time and spending, for the first time since its formation last year through the merger of several agencies.

The latest notice comes as China’s vibrant game sector is still recovering from a 10-month freeze in new title approvals last year after the formation of the State Administration of Press, Publication, Radio, Film and Television (SAPPRFT) in early 2018. The new agency resumed approvals in December, but the long freeze put a damper on companies large and small, including industry leaders Tencent Holdings Ltd. and NetEase Inc.

The new guidelines, contained in a notice issued on Tuesday, are the first from SAPPRFT, but just the latest in a much longer stream from various agencies over more than a decade as China grapples with how to control excessive game playing by minors.

The new notice outlined six main measures, including one detailing implementation of a system for real-name registration. A second laid out strict playing time limits for minors, saying operators should halt service for people under 18 from 10 p.m. to 8 a.m. Minors should normally be limited to no more than 90 minutes of game time per school day, or three hours on weekends and public holidays.

Tencent and NetEase have been following the two basic principles by applying them to smartphone-based games, but the measures outlined in the notice apply to PC games as well.

Both companies have been putting minors into two groups, one 12 and under and the other 13 and over. The 12-and-under group was being restricted to one hour per day, while the older group was restricted to two hours. The new notice didn’t make that distinction, and treated all minors as a single group with the 90-minute daily limit.

The notice also encouraged parents, teachers and other authority figures to supervise minors in their game playing and help them develop healthy habits. “Without effective supervision, restraint and participation by guardians, implementation of the system will be greatly compromised,” SAPPRFT said.

The notice follows a stream of similar efforts to provide guidelines for game operators to control spending and time spent online by minors. In 2007, eight government agencies issued a similar notice, calling on operators to implement anti-addiction systems in all their games. And in 2017 the culture ministry released a notice on limiting payments by minors as well as play time. But those were only proposals.