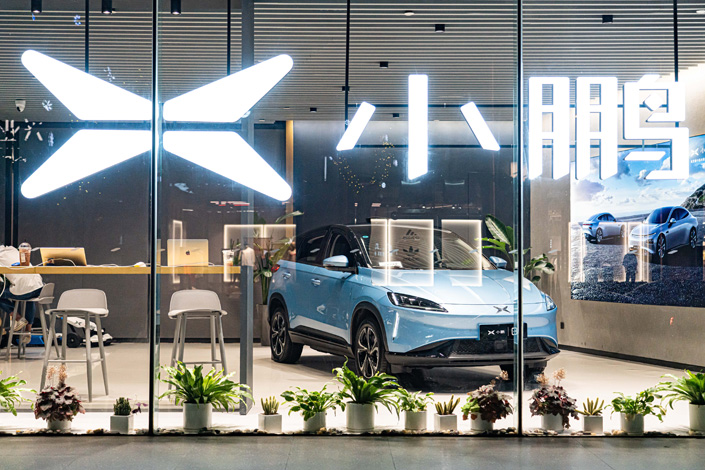 An Xpeng G3 car is on display in a store in Shanghai in August 2020. Photo: VCG

Welcome to Caixin's Tech Insider, your twice-weekly wrap on the movers, shakers and dealmakers in China’s tech scene.

Guangzhou Automobile Group, which trades as GAC Motor, is passing the tin around for investors on its electric car subsidiary GAC Aion, as part of the state-owned automaker’s ongoing effort to tap the private sector for talent and cash.

The parent will retain control of GAC Aion after bringing in strategic investor as it ultimately prepares to list the firm, according to a stock filing. GAC Motor said strategic investors would help enhance the competitiveness of the four-year-old unit, which has never turned a profit. The company said it aims to sell 100,000 cars this year, after selling 60,000 last year.

China’s Vivo for the first time sold more 5G smartphones in the Asia-Pacific region than any other brand during the second quarter of 2021, capitalizing on the decline of onetime rival Huawei’s handset business, which was throttled by U.S. tech export restrictions.

In the three months through June, Vivo grew its market share in the region to 20% from 13.3% a year ago, according to research firm Strategy Analytics, which didn’t say how many devices the firms shipped. “The combination of leading technology and affordable prices have made Vivo’s smartphones, such as its iQOOO U3 5G and iQOOO 7 5G, the most popular 5G devices in the region,” said Wu Yiwen, a senior analyst at Strategy Analytics.

The Guangzhou-based firm’s net loss attributable to ordinary shareholders widened to 1.19 billion yuan ($185 million) in the second quarter from 1.14 billion yuan a year earlier, according to an unaudited earnings report. That was despite quarterly revenue ballooning 536.7% year-on-year to 3.76 billion yuan, about 95% of which came from vehicle sales. Between April and June, Xpeng delivered 17,398 electric vehicles, more than five times the figure from a year ago, it said.

Jidu Auto, a smart electric vehicle joint venture of Baidu Inc. and Zhejiang Geely Holding Group, has conducted a wind tunnel test for the prototype of its first car model, just six months after the new venture was registered, Jidu CEO Xia Yiping said in a private post on his WeChat account.

“Jidu’s first product has completed wind tunnel testing on a full-size clay model and achieved a great drag coefficient,” said the post, which was viewed by Caixin.

Jidu plans to showcase its first car model at the Beijing International Automotive Exhibition next year, according to domestic media reports.

Beijing-based startup Neural Galaxy, which is seeking to treat a grab-bag of brain disorders, said Monday it had raised 500 million yuan ($77 million) in a Series A funding round led by 3E Bioventures, and joined by Lotus Lake Capital, Frees Fund and Lightspeed China Partners. The money will be used to attract staff, perform trials and ultimately bring its products to market, the company said.

Two-year-old Neural Galaxy claims to have invented a first-of-its-kind neural imaging system. The firm said that it is embarking on clinical trials with “many top hospitals” in China to develop treatments for brain diseases including Alzheimer’s disease, but did not give specifics.

Shares of several government-backed cloud service companies surged on Monday after the State-owned Assets Supervision and Administration Commission of Tianjin ordered firms controlled by the city to migrate their data from private operators like Alibaba to a state-backed cloud infrastructure system. The move from Beijing’s southeast neighbor comes as top policymakers tighten rules on data collection and handling as part of a crackdown on the country’s internet giants.

The firms that spiked were:

ByteDance Inc. bought China’s largest virtual reality (VR) headset maker Pico Interactive Inc. for undisclosed terms, a ByteDance representative told Caixin on Monday, raising questions about whether the firm will apply the tech to gaming, or e-commerce, or something else entirely.

Based on technology pioneered in the 1950s and 60s, VR has been slow to take off both in China and elsewhere, in part because of patchy consumer demand for the specialized headsets required for it but also due to the disorienting effects of spending too much time cut off from real-world experience. Tech consultancy IDC forecasts less than 10 million headsets will be sold around the world this year.

But VR is periodically hyped, and in recent years it has attracted big investments such as that by Facebook Inc. in Oculus. While Pico lags behind Oculus in terms of global shipments, the Chinese startup is the biggest player domestically.

The Caixin Tech Insider is compiled by Ding Yi and edited by Flynn Murphy. Send your tips and feedback to yiding@caixin.com