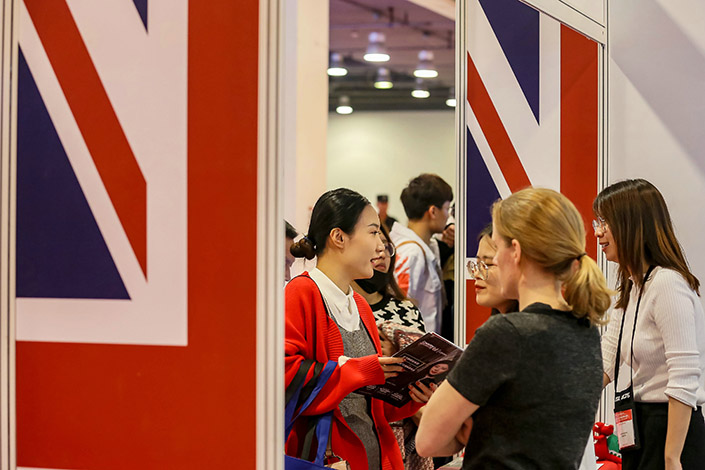 Students discuss studying in the U.K. at the 2019 China International Education Exhibition in Beijing in October 2019. Photo: VCG

As the start of the new academic year rapidly approaches, many Chinese students are facing uncertainty about whether or not they’ll be able to start their planned studies in the U.K. on time as the British visa authorities blame delays on the volume of applications.

Caixin has learned of delays experienced by students who have submitted their applications to visa centers around China, including in Beijing, Shanghai, Guangzhou and Hangzhou.

In a statement issued Thursday, the British Embassy in Beijing said that U.K. Visas and Immigration — the Home Office department responsible for assessing visa applications and issuing travel documents — is swamped under a large number of applications and is experiencing delays.

The embassy added that it would “work around the clock to ensure that the current situation can be improved as soon as possible.”

According to data from the U.K.’s Universities and Colleges Admissions Service (UCAS), a record 28,490 Chinese students applied for undergraduate studies in the country this year, a 17% increase from the year before.

UCAS doesn’t publish data on postgraduate applications. However, the latest data from the Higher Education Statistics Agency show that a total of 104,240 Chinese students enrolled in the first year of higher education study in the 2019/2020 academic year, indicating that the postgraduate number is likely far larger.

Several students told Caixin that they had paid extra to expediate their applications to ensure they could get them well before their scheduled flights — which are particularly expensive at the moment due to the pandemic. Therefore, the delays are forcing them to pay out even more extra cash to reschedule their flights.

A student in southern city of Shenzhen told Caixin that she filed for an expedited visa application in mid-August, but hadn’t received her visa prior to her planned departure on Sept. 1. She then had to pay an extra 6,800 yuan to change her flight to a later date.

Some students said they’ve turned to third-party agencies which claim they can get visas within 24 hours for just 8,800 yuan.

A Hangzhou-based student said he paid for such a service in late August. However, the agency later paid back his money and said that the service would no longer be offered due to “increased scrutiny in recent days.”

Many students are also complaining that visa application centers are charging extra fees while still not delivering what’s promised.

Interviewees told Caixin that the Shanghai visa application center is offering a “super-fast visa service” that charges 8,821 yuan for visas to be processed within 24 hours. However, this type of service cannot be found on UKVI’s official website.

Several visa applicants told Shanghai-based media The Paper that they were told by UKVI that their applications had been approved mid-August. However, when they asked the visa centers when they’d receive their documents, they were told to pay another 8,800 yuan to get the visas in 24 hours.

The British Embassy said in an earlier statement on Tuesday that it has noticed the complaints over the visa delays and it is investigating the issues.