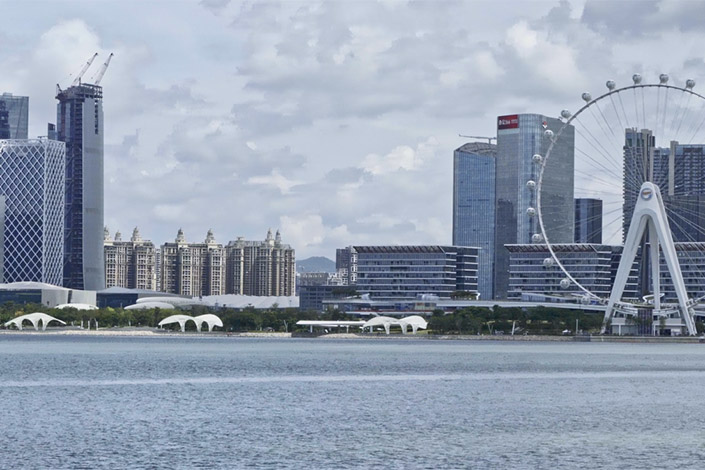 The CBD of Shenzhen’s Bao’an district

China’s financial reform zone in Shenzhen has been allowed an eightfold expansion that will eventually make it twice the size of New York City’s Manhattan district as part of a plan released by the government to further integrate Guangdong province with the Hong Kong special administrative region.

The Qianhai cooperation zone was expanded to 120.56 square kilometers from 14.92 square kilometers, according to a plan (link in Chinese) released Monday by the State Council and the Central Committee of the Communist Party. The zone will broaden its focus from financial services, technology and logistics to manufacturing and the marine industry. It will continue to test financial reforms in areas such as cross-border yuan use and boost green finance and connectivity with Hong Kong’s financial markets. It will also host a big data platform for cross-border trade.

A paint supplier of troubled property giant China Evergrande Group says the company has failed to pay back more than 100 million yuan ($16 million) in overdue commercial paper after repaying part of its debt with property, according to a company filing Tuesday.

Yi Huiman, chairman of the China Securities Regulatory Commission (CSRC), made the comments Monday at a conference organized by the World Federation of Exchanges.

China will expand the supply of international products in commodities and financial futures, promote the establishment of a qualification certification mechanism for overseas employees, and provide fairer, more efficient and more convenient services for overseas institutions and investors to participate in China’s capital market, Yi said.

Some major banks in Hong Kong will be ready to sell cross-border wealth management products (WMPs) in the Greater Bay Area in early October, the Hong Kong Economic Journal reported, indicating that the long-awaited program is likely to launch soon.

The report (link in Chinese) said Monday that the banks last week conducted final technical tests based on suggestions from regulators on the Chinese mainland and in Hong Kong. Detailed regulations for the program are expected to be launched soon, the report said.

Stocks on China’s over-the-counter stock market surged after President Xi Jinping disclosed plans for a new national stock exchange in Beijing to serve as a financing platform for innovative small and midsize enterprises.

All of the 66 “select tier” premium companies on the National Equities Exchange and Quotations Co. Ltd. (NEEQ), owner of the newly established Beijing Stock Exchange, closed up Monday after 90% of them jumped Friday. The total market value of the 66 stocks increased 20% from last Thursday. Trading volume more than quadrupled to 3.8 billion yuan ($597 million).

Hong Kong will allow Chinese mainland and Macao residents to enter the city without going through mandatory quarantine starting Sept. 15, implementing a measure that had been delayed since May, Chief Executive Carrie Lam said Tuesday.

Under the program, as many as 2,000 people will be allowed to enter the special administrative region, 1,000 through the Shenzhen Bay Port and 1,000 via the Hong Kong-Zhuhai-Macao Bridge Port, Lam said.

Prosecutors in East China dropped a case against a former Alibaba Group Holding Ltd. manager accused of sexually assaulting a female colleague, the latest development in a case that has sparked nationwide outrage over sexual misconduct in the workplace.

The worker, surnamed Wang, was placed under investigation last month after the woman said she was raped and sexually assaulted by him and a client during a work trip to Jinan, capital of East China’s Shandong province. Wang was the victim’s superior on a project at the time of the incident.

On Monday, prosecutors from Jinan’s Huaiyin district said in a statement (link in Chinese) they did not approve of the arrest of Wang, saying the “forcible indecency behavior committed by Wang did not constitute a criminal offense.”

A Chinese government official warned medical device companies that their appetite for venture capital is leading to far too much money going to companies that do not have much capacity to innovate.

The situation undermines both the development of the medical device industry and government efforts to spur innovation in a field that has grown into an investor darling, said Sun Lei, director of the Center for Medical Device Evaluation at the National Medical Products Administration (NMPA), during an industry forum Monday in Beijing.

Local governments should establish benchmark fees and floating ranges and include them in pricing catalogs, according to a notice from the NDRC. Price increases from the standard level will be capped at 10%. Local governments need to issue their standard pricing for private tutors and related polices by the end of 2021.