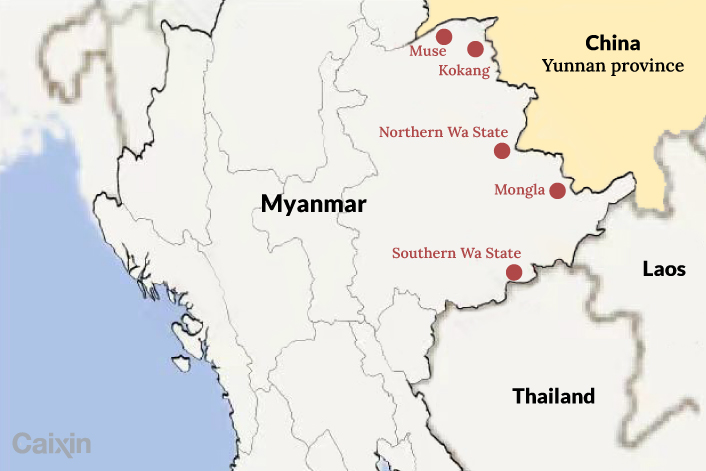 Chen Zhongxia, a Fujian native, thought there was still room for negotiation when he received a phone call from hometown officials urging him to return. Chen owns a restaurant in Mong Pawk, northern Myanmar’s Wa State, and wished to stay in the country. But the tone was insistent, with officials visiting his family back home to ask them to put pressure on him.

In mid-May, authorities in Chen’s hometown issued a notice telling Chinese nationals suspected of violating the right to stay in northern Myanmar to return to China and turn themselves in before June 30. Chen had crossed the border illegally, and was therefore a target of the rule.

Chen moved to Wa State after the business he ran in his hometown failed over a year ago. Many Chinese nationals are in Myanmar for similar reasons, as setbacks at home have driven them across China’s southern border in search of money-making opportunities.

Zhou Yutang spent a hectic August coordinating fellow Chinese nationals’ efforts to go home. “The huge number of Chinese nationals leaving Myanmar is like a receding tide,” he said from his home in Wa State. “And tens of thousands are still waiting.”

Since the beginning of the year, local authorities in towns and cities across China have been urging their citizens living in the border regions of Myanmar to return. Many of them, working in places like Muse, Kokang, Mongla and Wa State, crossed the border illegally, often to engage in scams such as telephone and online fraud. In exchange, the state is offering leniency, as long as the migrants return by certain deadlines.

Chinese scammers, working in gangs to fool unsuspecting phone users back home into handing over their personal details, have become adept at theft. In 2019, a total of 2,553 suspects were extradited (link in Chinese) to China for their alleged involvement in telecom fraud, according to the Ministry of Public Security. Fraud cases originating in northern Myanmar accounted for 50% to 60% of total cases in China.

Amidst strengthening police efforts to crack down on cross-border crime, the Myanmar homecoming campaign has targeted more than 140,000 people from Chinese regions including Fujian, Hunan, Guizhou, Guangxi and Sichuan, Caixin has learned. Not all homecomers are fraudsters — some have businesses or work in northern Myanmar — but at the very least most have a history of illegal entry into the country.

Almost all of the Chinese businessmen in northern Myanmar are aware that telecom fraud groups or “cash network” companies operate nearby. Court verdicts show that some businesses in northern Myanmar have become their intermediaries. By handling money transfers and withdrawals, such companies make a profit from processing fees. Moreover, the cash flow from the illegal industry has spurred a boom in restaurants and related sectors in northern Myanmar.

A local businessman, originally from Hunan province, said that local authorities in northern Myanmar also knew about the telecom fraud networks in the region. They have even dispatched guards to provide some “cash network” companies in Wa State with security. However, since Chinese provinces began to take action, local authorities in June decided it was time to dismantle the local “cash network” industry, a source close to the Wa State government told Caixin.

The campaign launched by local governments in China came after a special directive was issued in January by a State Council office given responsibility for cracking down on telecom and internet scam, Caixin has learned. The office ordered districts and counties from where most illegal Chinese nationals in northern Myanmar originated to make rectifications within a time limit. Zhao Kezhi, minister of Public Security, said at a meeting in April that the country should rapidly launch a new round of crackdowns on illegal telecom network crimes.

This pressure from the top authorities then prompted local governments to take action using various measures. Authorities in Xiping township in Fujian’s Anxi county launched a campaign in mid-April, stating that local villages and communities would be held accountable if they failed to take effective measures to persuade overstaying Chinese nationals in northern Myanmar to return home.

In Hunan, authorities published names, photos and addresses of overstaying Chinese nationals who refused to return from Myanmar and warned that their household registration status, bank accounts and SIM cards would be suspended unless they turned themselves in before Sept. 30.

In recent years, Chinese criminal gangs moved to Southeast Asia including Myanmar, Laos and Thailand as China tightened its crackdown on telecom fraud at home. Chinese public security organs have since established joint law enforcement campaigns with Cambodia, the Philippines and Laos, pressing offenders engaged in the fraud further into northern Myanmar, and turning it into a hotbed of cross-border crime.

According to Jian Kunyi, who researches cross-border crimes at Yunnan University of Finance and Economics’ Law School, telecom fraud networks have had easy access to resources as there is frequent cross-border trade between China and Myanmar, and many residents of southwestern China’s Yunnan province, which borders northern Myanmar, speak the same language and frequently travel between the two countries.

Several other factors have also led the telecom scam groups to gather in northern Myanmar. The region is controlled by different ethnic armed organizations, some of which acquiesce to and even encourage telecom fraud and other crimes, Jian said.

According to Xie Ling, a member of a research team on telecom fraud at Southwest University of Political Science and Law’s Criminal Investigation School, telecom fraud networks became active in northern Myanmar after the country promulgated its law on gambling in 2019, legalizing foreign-invested casinos in the country, which gave space to criminal groups engaging in online gambling, phone scams and money laundering.

That space was grown due to the lack of governance in the area. Myanmar’s central government also has limited control over northern Myanmar, so it is difficult to effectively carry out international criminal and judicial cooperation between China and the Southeast Asian country, Jian said. Meanwhile, the recent political turmoil in the country has triggered conflict among local ethnic armed organizations in the region.

The nationwide crackdown on telecom fraud in northern Myanmar is part of ongoing efforts that began in 2019. In October that year, the State Council’s designated office has ordered a freeze on a number of social media and mobile payment accounts on QQ, WeChat and Alipay that were suspected of engaging in fraud along its border with Myanmar.

Strict border controls imposed by China during the pandemic and tested this summer by recurrent Covid-19 clusters in the area have meant Chinese authorities can only oversee the campaign at arms-length.

In October 2020, a nationwide “Card Breaking Campaign” was launched to crack down on illicit bank card transactions in a bid to combat telecoms fraud and online cross-border gambling. The campaign was designed to cut the connection between mobile phone SIM cards and bank cards, and users who are not the registered card holders.

The ongoing campaign has raised the costs to criminal groups, and they have become more cautious amid strengthened crackdown efforts, with some overseas criminal networks switching bases more frequently than before, Xie said.

A scholar who wishes to remain anonymous says that the Myanmar homecoming campaign may deter some Chinese organizers and participants from getting involved in telecom fraud, especially young people who want to leave these networks, as many of them were first enticed into the networks by their fellow villagers, friends or relatives. However, the method can be less effective in dealing with repeat or money-driven offenders.

However, the strengthened crackdown could prompt criminal networks in northern Myanmar to stay on the move, the scholar said, and the Myanmar town of Myawaddy, close to its border with Thailand, could be their next stop.