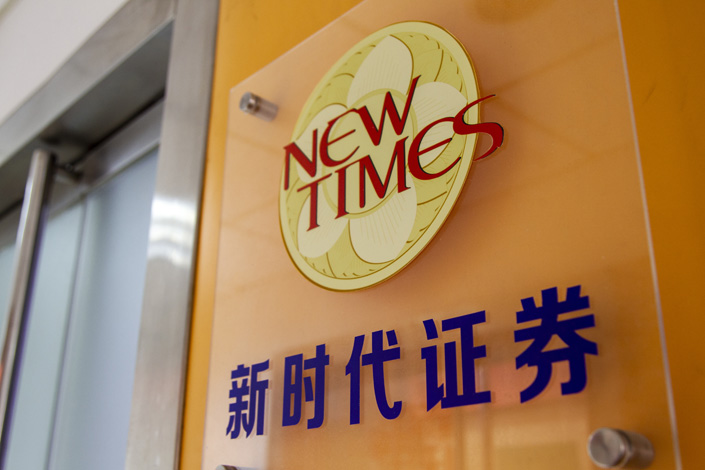 The office of New Times Securities in Shanghai in April 2020. Photo: VCG

Shareholders in a securities firm linked to fallen tycoon Xiao Jianhua’s Tomorrow Holding Co. Ltd. have put their combined 98.24% stake up for sale as regulators take another step forward in dismantling the once free-wheeling financial conglomerate.

The eight largest shareholders of New Times Securities Co. Ltd., some of whom are connected with Tomorrow Holding, are offloading 2.9 billion shares on the China Beijing Equity Exchange, a property rights trading platform based in the capital. They are aiming to raise no less than 13.1 billion yuan ($2 billion), according to a filing (link in Chinese) on the exchange Thursday.

New Times Securities is one of nine financial companies controlled by Tomorrow Holding that were taken over by financial regulators in July 2020 as part of efforts to untangle the secretive conglomerate’s sprawling financial empire that also included Baoshang Bank Co. Ltd., the regional lender seized by regulators in 2019. The takeover of the nine companies, which played a key part in Xiao’s business and backed many of its high-profile acquisitions, was initially only supposed to last one year, but was extended for a further 12 months in July this year.

Founded in 1999, Tomorrow Holding grew into a conglomerate with businesses as diverse as banking, securities, insurance, coal and real estate. Through complicated and sometimes illegal shareholding arrangements, Tomorrow Holding controlled a large number of financial institutions that helped fund Xiao’s business expansion. Chinese authorities detained the tycoon in January 2017 as part of an investigation into corruption.

There are strings attached for the new owners of New Times Securities — they should comprise no more than three entities and include one that is willing to take a controlling stake in the brokerage, according to the filing. They will be required to cooperate with regulators to deal with the asset management products sold by New Times Securities that are now in default, and must also agree to maintain the stability of the brokerage’s business operations and staff.

At least four of the brokerage’s eight largest shareholders have direct connections with Tomorrow Holding, and Caixin revealed (link in Chinese) in July that shares were pledged by Tomorrow Holding as collateral for loans of about 12 billion yuan.

In 2020, New Times Securities reported a net profit of 36.5 million yuan on revenue of 1.6 billion yuan, the Thursday filing showed. Its net assets stood at 10.2 billion yuan at the end of last year, the company’s 2020 annual report (link in Chinese) showed.

In February, a consortium led by China Chengtong Holdings Group Ltd., an investment company supervised by the State Council’s State-owned Assets Supervision and Administration Commission, offered to buy New Times Securities at a price-to-book (PB) ratio of 1 — an offer price equivalent to the broker’s net assets and a valuation lower than the industry average.

Unwinding the complex web of companies controlled by Tomorrow Holding and selling off its assets has been a difficult task for regulators. They began picking the conglomerate apart in 2019 with the seizure of Inner Mongolia-based Baoshang Bank because of its “severe credit risk” that threatened the stability of the banking system. The good assets of the lender were later taken over by Mengshang Bank, whose major shareholders include a national deposit insurance fund managed by the central bank, the government of the Inner Mongolia autonomous region and Anhui-based Huishang Bank Corp. Ltd.

The other six companies included in the nine seized by regulators in 2020 — four insurers and two trust firms — are being dealt with by the China Banking and Insurance Regulatory Commission.