By Quan Yue and Liu Jiefei 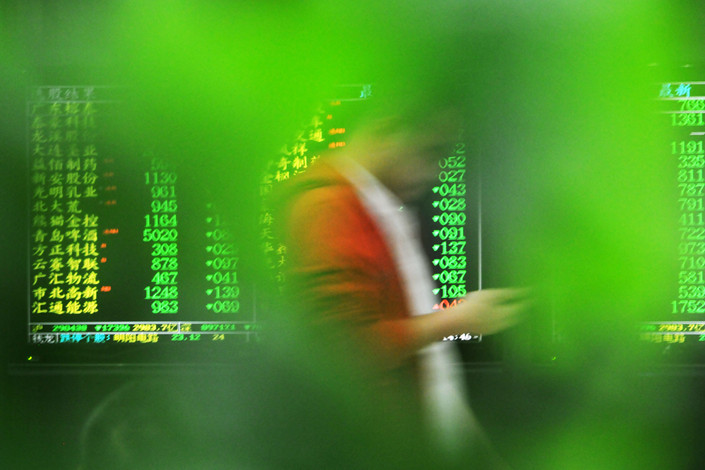 China’s Securities Regulator has announced a punishment for the Inner Mongolia-based securities firm Guorong Securities, which has been heavily involved in the pledged shares business. Photo: IC Photo

(Beijing) — A regional brokerage that has been under investigation by regulators since last year has been temporarily banned from carrying out proprietary bond trading and filing approval requests for new asset management products because of poor risk management and noncompliance in some of its operational practices.

The China Securities Regulatory Commission (CSRC) announced the punishment against the Inner Mongolia-based securities firm Guorong Securities Co. Ltd., which has been heavily involved in the pledged shares business, in a statement (link in Chinese) on Tuesday although it was dated May 10.

The CSRC has allowed some exceptions to the ban, which will last six months for bond trading and one year for asset management filings. For proprietary bond trading, Guorong will be allowed to sell bonds already in its portfolio, but not to buy new bonds unless such purchases are necessary to avoid liquidity risks. The regulator will also accept filings for new asset management products if they are being issued to roll over products invested in assets yet to mature, according to the statement.

The watchdog took action against Guorong after an investigation earlier this year found the brokerage had failed to act on a significant number of warnings flagged by its risk management system and unearthed inconsistencies between data in its risk control systems and its trading systems, according to a report (link in Chinese) issued in March. The inspection also found management of the business was chaotic, noting failure to segregate employees working in different business departments in line with regulations. Guorong also failed to monitor transactions between different departments within the company, the regulator said, highlighting instances where the wealth management product team sold bonds to the team providing financial advisory services to clients.

That wasn’t the first time Guorong had come to the attention of the watchdog. The Inner Mongolia branch of the CSRC published a report in December 2018 detailing a series of violations of securities regulations, including failures in information disclosure and risk management.

The company disclosed in its 2018 annual report released in April that it had made a provision for impairment losses of 839 million yuan ($121.48 million) on its pledged shares business, where it had lent money to clients who had put up stock in listed companies as collateral. But the stock market slump in the second half of 2018 triggered partly by a liquidity crunch left many securities firms nursing heavy losses as borrowers couldn’t stump up more shares or cash to back their loans.

Although Guorong Securities is registered in Inner Mongolia, it has a presence in 47 cities across 26 provinces, municipalities and autonomous regions, according to the website of Beijing Changan Group, which owns more than 70% of Guorong’s equity. It ranked 49 out of 91 brokerages in terms of the value of securities underwriting in 2018, according to the Securities Association of China, the industry’s self-regulatory body.

The sanctions against Guorong Securities could harm its ranking in the annual industry review of securities companies due to be published by the CSRC in July. The firm was given a BBB rating in last year’s review of 98 brokerages, the fourth-highest on a scale of 11 classifications based on a firm’s risk management, competitiveness and regulatory compliance.