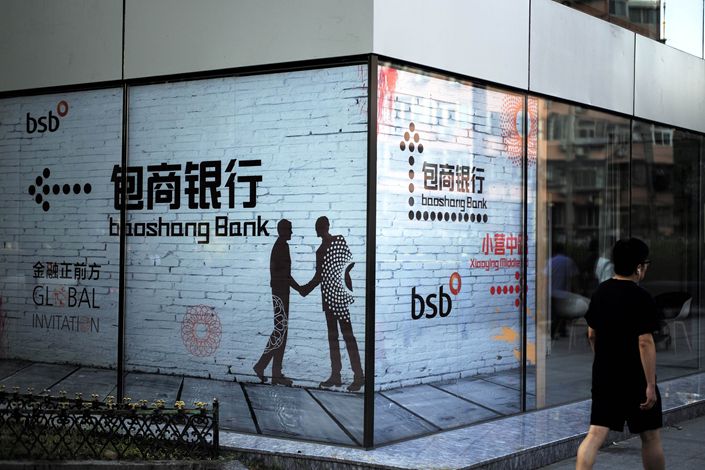 The cases came to light in the wake of investigations into the collapse of Baoshang Bank which was seized from private conglomerate Tomorrow Holding in May 2019. Photo: IC Photo

China’s top antigraft agency has disclosed details of corruption cases involving five former banking regulators in the Inner Mongolia autonomous region who between them took more than 700 million yuan ($109 million) in bribes, mostly connected with scandal-hit Baoshang Bank Co. Ltd., a failed local lender taken over by the state in 2019.

The officials, including Xue Jining, a former head of the Inner Mongolia branch of the now-defunct China Banking Regulatory Commission (CBRC), abused their power to seek benefit for those who paid them bribes related to establishing institutions, approving new businesses and loans, project construction and personnel appointments, the Central Commission for Discipline Inspection (CCDI) said in report (link in Chinese) released on its website Tuesday.

“The problem of regulatory corruption exposed by the cases (linked to Baoshang Bank) is shocking,” one unnamed official from a special task force set up by the CCDI to investigate graft linked to the lender, was quoted as saying in the report which is part of an education campaign the agency is running for officials at the China Banking and Insurance Regulatory Commission (CBIRC), which superseded the CBRC in 2018.

“Under the bad influence of ‘a key minority,’ Inner Mongolia’s banking regulatory system fell across the board,” the report said. “Big or small, these officials ate everything,” taking bribes not only from Baoshang Bank, but also from other banking and financial institutions, business owners, relatives, friends, and subordinates. They also roped in their families, with spouses, siblings and parents all getting involved, the report said.

Corruption was endemic among the regulators and was an important factor in the collapse of Baoshang Bank. Some 80% of the 700 million yuan of bribes uncovered by the CCDI’s task force were related to the lender, the report said. Xue, who is currently standing trial for corruption, accepted more than 400 million yuan, the report said.

“Officials and the institutions they were supervising were a family of ‘cats and mice’,” the CCDI report said. “Regulators served as the foot soldiers of illegal conglomerates and they were deeply bound together by shared interests.”

The cases came to light in the wake of investigations into the collapse of Baoshang Bank which was seized from private conglomerate Tomorrow Holding Co. Ltd. in May 2019. The bank’s high leverage, poor lending practices and corrupt activities had built up risks that regulators feared could threaten the stability of the banking system. Subsequent investigations found a 220 billion yuan hole in the bank’s books due largely to massive misappropriation by Tomorrow Holding, whose billionaire founder Xiao Jianhua was placed under investigation by anti-corruption authorities in early 2017.

Baoshang Bank greased the palms of regulators to help its expansion and avoid regulatory scrutiny, the CCDI’s report showed.

It gave 100,000 yuan to Liu Jinming as a welcome gift when he was appointed as the Communist Party secretary and director of the CBRC branch in Baotou, where the lender is based, in late 2009. After Liu took office, Li Zhenxi, then chairman of Baoshang Bank, told Liu, “Leader, we follow you, and you support us to rush forward. When we get old, we can have fun together.”

“Baoshang Bank took the initiative to help me with everything, which made me feel like we are a family,” the report quoted Liu as saying “I completely forgot the relationship between us should be that of a regulator and an institution being supervised.”

Xue said that when he took over as head of the CBRC’s Inner Mongolia branch, Baoshang’s then chairman, Li, made great efforts to build a close relationship with him and “humbly” consulted him about economics. He also regularly sent gifts to Xue’s wife and when Xue returned to his home in Beijing every year for the Lunar New Year holiday, it was always full of presents sent by Li.

The regulators failed to fulfil their responsibilities to supervise Baoshang Bank, a CCDI official said. The banking regulator’s Inner Mongolia branch and Baotou branch did not fully conduct due diligence when approving the lender’s new businesses, which covered up problems that should have come to light if the procedures had been correctly followed, the official said.

From 2009 to 2016, officials from the CBRC’s Inner Mongolia and Baotou branches conducted more than 50 on-site inspections of Baoshang Bank, but deliberately avoided inspecting parts of the business that had significant potential risks and never imposed administrative penalties on the bank for the problems they did find. Xue and Jia Qizhen, a former official at the Inner Mongolia branch, even instructed officials to delete records of major violations uncovered in on-site inspections.

The banking regulator has its own internal rating system for the country’s lenders and the CCDI task force found that local regulators managed to lift Baoshang Bank’s rating to a level that was “seriously inconsistent” with its actual risks. They also ignored reports from the public alleging that Baoshang Bank was controlled by an illegal financial conglomerate and had transferred massive funds to it.

Xue was Communist Party secretary and head of the CBRC’s Inner Mongolia branch from 2007 to 2014 before retiring in 2015. He was expelled from the party (link in Chinese) in January 2021 after he was put under investigation in June 2020. Liu and Jia were probed by graft busters in 2019 and were later expelled from the party and removed from public office.

Baoshang Bank was the first Chinese lender to be taken over by the state in two decades. As part of a restructuring to clean up the bank, its good assets were taken over by Mengshang Bank Co. Ltd., a new bank set up specifically to deal with the fallout from the lender’s collapse, and Hong Kong-listed Huishang Bank Corp. Ltd. The rump of its assets was kept in the old Baoshang Bank and, in November 2020, the CBIRC gave its formal approval for the lender to start bankruptcy proceedings which were finalized in February.