By Kelsey Cheng and Shen Xinyue 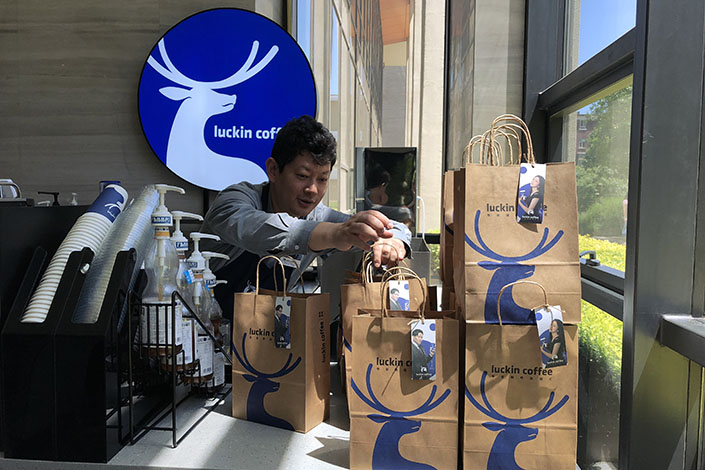 Embattled Luckin Coffee Inc. has reported a net loss of 5.6 billion yuan ($866 million) for 2020, widening by 77% from the company’s 3.1 billion yuan shortfall the year before.

Revenue jumped one-third to 4 billion yuan, on the back of its products’ increased average prices, the company said in its 2020 annual results released on Tuesday. The earnings were delayed after the company had to redo earlier financial results due to the accounting fraud scandal that rocked the Chinese coffee chain last year along with broader confidence in Chinese stocked listed in the U.S.

Total operating expenses for the year reached 6.6 billion yuan, 475 million yuan of which was related to the investigation of fabricated transactions and restructuring, its earnings showed.

The Starbucks challenger, which had previously relied on aggressively subsidizing its customers to lure them in, said it had reduced overall discount levels and terminated free product promotions in May last year, while launching new, pricier products.

As of July this year, the 4-year-old company operated 4,030 stores in China and had 1,293 partner stores, selling beverages to a total of 78.4 million active customers.

In a separate statement released on the same day, Luckin also said it has offered $187.5 million to settle all claims in a U.S. securities class action lawsuit filed last year over its accounting fraud.

A lawyer practicing in the U.S. who is familiar with capital markets told Caixin that there is no legal requirement for the size of compensation, and the result is based on negotiations. Under normal circumstances, it is calculated based on shareholders’ actual losses.

John Dong, a lawyer at Joint-Win Partners in Shanghai, said some shareholders were not satisfied with the figure, but most had already given their approval, meaning it’s a done deal.

In April last year, after a damning short seller report at the start of 2020, the company admitted a $300 million accounting scandal, revealing that it had inflated its 2019 sales by more than 60%, or 2.2 billion yuan, by fabricating customer and transaction data, prompting a slew of lawsuits against the company, a management revamp, and a delisting from the Nasdaq in June.

A group of 45 companies involved in the fraud were fined 61 million yuan by the State Administration for Market Regulation in September 2020 for cheating and misleading the public through fake business data on revenue, cost and profitability.

In December, the company also agreed to pay the U.S. Securities and Exchange Commission $180 million to settle fraud charges. The case triggered a wave of backlash from American regulators and politicians against U.S.-listed Chinese companies, many of which do not grant U.S. audit regulators access to their audit working papers.

Luckin entered bankruptcy restructuring last July when a court in the Cayman Islands, where it’s registered, appointed two provisional liquidators to negotiate with creditors. The company announced in a third statement on Tuesday that as part of the restructuring, it has requested a hearing to restructure its $460 million convertible senior notes due 2025. A convertible senior note is a debt security with an option to be converted into a company’s shares.

Once the world’s fastest-growing coffee brand, Luckin filed for bankruptcy protection in New York in February. The petition is part of the company’s efforts to insulate its business in China and will effectively shield the company from lawsuits by U.S. creditors as it restructures.

Chairman and CEO Guo Jinyi said the class action settlement, pending approval by the U.S. court overseeing the lawsuit and the Cayman Islands court overseeing its liquidation, will “resolve a significant contingent liability and enable Luckin Coffee to move forward with a greater focus on our operations and the execution of our strategic plan.” Guo took the helm in July 2020 after company co-founder, Lu Zhengyao, was removed.

A person close to Luckin told Caixin that the company has no other claims or penalties filed against it at the moment.

The Xiamen-based firm’s depositary shares jumped 3.44% to close at $15.05 on Tuesday following the announcements.

In April, the company secured $250 million from investors including Centurium Capital and Joy Capital.