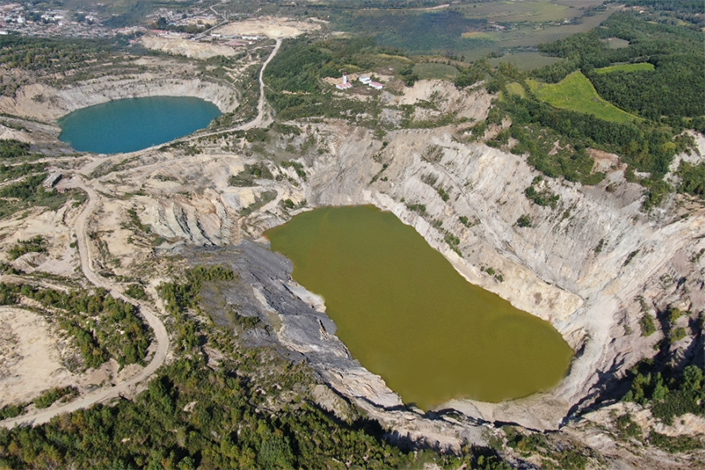 The disclosures highlight the ongoing efforts of the world’s largest emitter of greenhouse gases to crack down on ecological abuse.

The violators include subsidiaries of two state-owned mining firms, China Nonferrous Metal Mining (Group) Co. Ltd. (CNMC) and China National Gold Group Co. Ltd. (CNGC), according to the Ministry of Ecology and Environment (MEE). The inspectors slammed the companies for poorly carrying out their environmental protection obligations, according to MEE reports published Friday.

The disclosures come after the central government in late August sent teams of inspectors (link in Chinese) to five Chinese provinces and the two miners to probe issues such as efforts to meet carbon emission goals, projects that consume large amounts of energy and produce high levels of emissions, as well as those that cause major ecological damage and environmental pollution.

Beijing has placed the environment high on the agenda in recent years by tightening emissions standards, incentivizing green industries and cordoning off areas for conservation. On Tuesday, President Xi Jinping pledged during a virtual address to the U.N. General Assembly that China would strive to peak carbon dioxide emissions (CO2) by 2030 and become carbon neutral by 2060.

The disclosures highlight the ongoing efforts of the world’s largest emitter of greenhouse gases to crack down on ecological abuse. As of mid-September, more than 1,100 people who had failed to comply with environmental laws had been punished (link in Chinese) in this round of inspections, with total fines meted out amounting to 40.1 million yuan ($6.2 million), according to a MEE statement. Some 200 officials were censured.

One of the Friday reports revealed that CNMC subsidiary Ningxia Orient Tantalum Industry Co. Ltd. (OTIC), located in Northwest China’s Ningxia Hui autonomous region, illegally sold about 4,500 barrels (link in Chinese) that used to contain isobutyl methyl ketone, a flammable liquid, to a recycling company that was not qualified to dispose of hazardous waste.

At the same time, the OTIC sealed several agreements in June in which it said the waste barrels had been handed over to a raw material supplier in the eastern city of Nanjing and forged the signature of a staff member of the supplier to make the documents more “real,” the report said.

In one case, the mining areas of several CNGC subsidiaries across China were found to have overlapped with national nature reserves or illegally encroached into grasslands (link in Chinese). The cumulative grassland area occupied by one mining company in the northern region of Inner Mongolia was about 1,634 hectares (4,037.7 acres), causing severe damage to the local grassland, a separate report said.

In another case, inspectors in Liaoyuan in Northeast China’s Jilin province, found that local authorities failed to hit their energy consumption and intensity targets (link in Chinese) from 2016 to 2020. Liaoyuan’s coal consumption reached 860,000 tons and energy intensity increased 5.47% over that period, well off targets to consume less than 650,000 tons of coal and achieve a 15% reduction in its energy intensity under the province’s plan.

Liaoyuan’s carbon dioxide emissions per unit of GDP also rose 8.57% between 2016 and 2019, becoming the only city in the province that hadn’t achieved the “double control” targets, while CO2 emission intensity increased over that period, said the MEE.