Japan’s Kishida Ascends to Power With a Good Temper, but an Ambiguous Vision 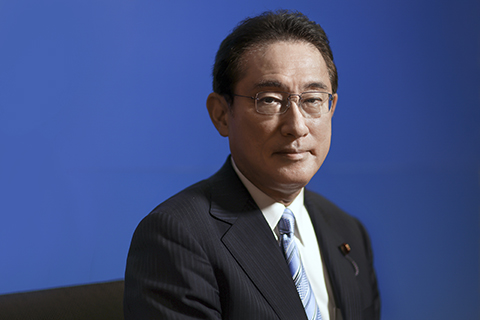 Fumio Kishida, newly elected head of Japan’s ruling Liberal Democratic Party and the country’s next prime minister, sits for a photo at his office in Tokyo on Sept. 3. Photo: Bloomberg

In a four-way race, the 64-year-old beat out Taro Kono, media-savvy vaccine minister who was most popular among party members as well as the public. Kishida victory was made possible by overwhelming support from peer parliamentarians.

At a new year’s gathering several years ago in his constituency of Hiroshima, Western Japan, Gakuhito Ito, chief of Kishida’s supporters association criticized the local politician in front of roughly 1000 participants. “You sound like a critic with your greetings. If you don’t explain what you want to do, or your national vision, no one will follow you.”

Kishida, standing by, listened with a bitter smile. In his greeting, the banker-turned-politician made no comment about what was said about him.

Ito, 70, who owns a wholesale business, has known Kishida for three decades. He told Caixin that Kishida is “very serious. A little too serious.”

The politician’s motto is “to treat others warmth and freshness, like a spring breeze.”

In his first book, “Kishida’s Vision — From Division to Harmony” published last year, Kishida vowed to tackle the widening economic gap and revitalize small and midsize enterprises (SMEs). But other than these pledges, his policy idea lack freshness, and instead show signs of continuity with past administrations.

His emphasis on economic policy is not a surprise, as it reflects an undercurrent philosophy held by his midsized fraction inside the ruling party, as well as his politician father and grandfather before him.

Kishida’s grandfather, Masaki, ran a department store before getting into politics, while his father served as chief of an SME agency before becoming a parliamentarian.

Both had ties to a mainstream political fraction called Kochikai that prioritized economic policy over security while stressing Asia diplomacy. The fraction’s influence has shrunk in recent years, especially after its failed attempt to overturn the Mori Cabinet in 2000.

Kishida’s former secretary, Kenji Hataishi, told Caixin that he clearly remembers what his boss said during his time out in the political wilderness. “It is time to clean the floor with a rag,” meaning he would endure low-level positions, even though his supporters had high hopes he would soon become a minister.

Between 2012 and 2017, Kishida was appointed foreign minister under the second cabinet of former Prime Minister Shinzo Abe. One of his milestones during his long tenure was the Japan–South Korea Comfort Women Agreement in 2015. More importantly, Kishida got then-U.S. President Barack Obama to visit Hiroshima in 2017, marking the first time an American president visited the city where the U.S. dropped the atomic bomb.

“I heard that a team from the Ministry of Foreign Affairs made a big contribution,” Hataishi said of the visit.

The spirit of teamwork that Kishida espouses is well-known, yet his diplomacy was often eclipsed by Abe’s strong leadership, leaving him without much public visibility.

After stepping down as foreign minister, Kishida took the post of chairman of the LDP Policy Research Council. However, as Musashi University professor Kuniaki Nemoto pointed out: “This council has not played a key role for a long time. Kishida’s efforts to revitalize the institution have not yielded much of a result.”

Toward the end of Abe’s administration, Kishida deliberately drew closer to the prime minister, expecting him to make a “concession.”

In his 2019 book, “LDP — Coordination of Values and Risks,” political scientist Takashi Nakajima analyzed the policy tendencies of nine key LDP leaders. On the horizontal axis of paternalism vs. liberalism and the vertical axis of socialization of risk vs. individualization of risk, Nakajima places Kishida at the very origin of both axes. This suggests that his past remarks failed to present what he stands for.

Analysts say what he wants to achieve as Japan’s next leader is even more unclear after influential politicians inside the party indirectly backed him, including Abe and Finance Minister Taro Aso.

When Kishida announced his bid to lead the party in August, he pledged to revisit a scandal involving the discounted sale of public land to a private school operator with ties to Abe’s wife. However, as the race for party leadership intensified, Kishida said he had no intention of revisiting the case.

Similarly, contrary to his previous intention to lower Japan’s long-term dependency on nuclear energy, he stressed during the debates the need to restart some of the reactors.

And he implied in his book that Japan should lead the Comprehensive and Progressive Agreement for Trans-Pacific Partnership (CPTPP), a multilateral trans-Pacific trade agreement, so that China can eventually join. However, he still left careful notes when China officially applied to join the pact in September.

Kishida is set to become the next prime minister next week. His utmost priority is to win in the next general election, set to take place in November at the latest.

“After winning the election, [Kishida] will be able to show his colors,” Nemoto predicted.