By Huang Shan and Cai Xuejiao 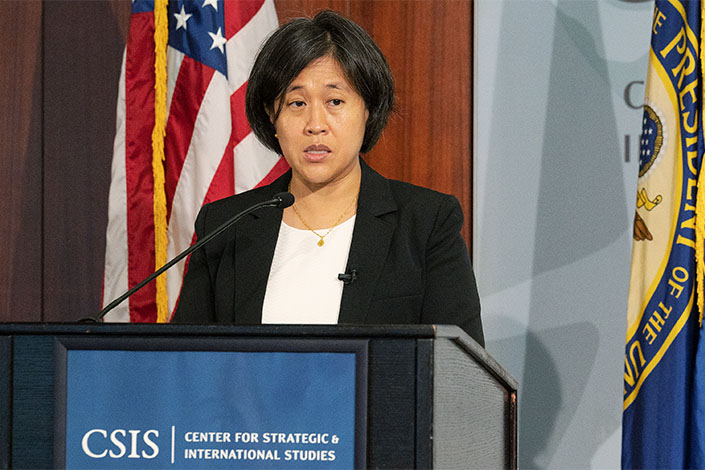 Katherine Tai, U.S. trade representative, speaks at the Center for Strategic and International Studies in Washington on Monday. Photo: VCG

The Biden administration will seek a new round of trade talks with China, U.S. Trade Representative Katherine Tai said in a speech this week that laid out the White House’s policy vision but didn’t rule out new tariff actions.

The U.S. “will discuss with China its performance under the phase-one agreement,” Tai said Monday at an event hosted by the Center for Strategic and International Studies.

She said she intends “to have frank conversations” with her counterpart in China “in coming days,” which will also “directly engage with China on its industrial policies.”

Tai also said the U.S. “will start a targeted tariff exclusion process” and “will ensure that the existing enforcement structure optimally serves our economic interests,” according to a transcript of the speech.

Prior to Tai’s speech, U.S. Secretary of Commerce Gina Raimondo said in an interview late September with the Wall Street Journal that she would seek to improve U.S. business ties with China. She said she plans “to lead delegations of U.S. chief executives overseas, including to China, to hunt for business and discuss longstanding trade issues.”

In past months, the world’s two largest economies have held a series of high-level meetings in attempts to reengage after four years of turbulent relations under the Trump administration, which in 2018 started to slap tariffs on a range of Chinese imports.

In late May, Vice Premier Liu He, who leads Beijing’s side of the China-U.S. comprehensive economic dialogue, held a phone conversation with Tai, marking the first time that the lead trade negotiators from both sides had spoken since U.S. President Joe Biden took office in January.

President Xi Jinping and Biden spoke on the phone on Sept. 10, in a call that was regarded as a sign of willingness by both leaders to pull their countries’ relations back on track.

However, just a day later, media reported that the U.S. administration was considering launching an investigation into Chinese subsidies under Section 301 of the U.S. Trade Act, an outcome that could lead to new tariffs on Chinese imports.

In response to a question at the Monday event about whether the U.S. will initiate a new Section 301 investigation, Tai said only that “I have all kinds of tools available to us,” and that “Section 301 is a trade enforcement tool. It is a very, very important tool.”

She added: “We will look at all available tools in addressing our concerns and ensuring that we are able to defend the interests of the American economy.”

However, Tai noted that “our objective is not to inflame trade tensions with China.” And in commenting on a “decoupling” strategy, she said it was not realistic for the two countries to stop trading with each other in terms of the global economy. “I think that the issue perhaps is, what are the goals we’re looking for in a kind of re-coupling?” she said.

Yang Jiechi, a member of the Politburo and China’s highest ranking diplomat, is scheduled to meet U.S. National Security Advisor Jake Sullivan on Wednesday in Zurich, Switzerland, according to the Chinese foreign ministry.

Yang and Sullivan met earlier this year when the two countries held their first high-level face-to-face meeting in Anchorage, Alaska, an event that was characterized by tense exchanges.