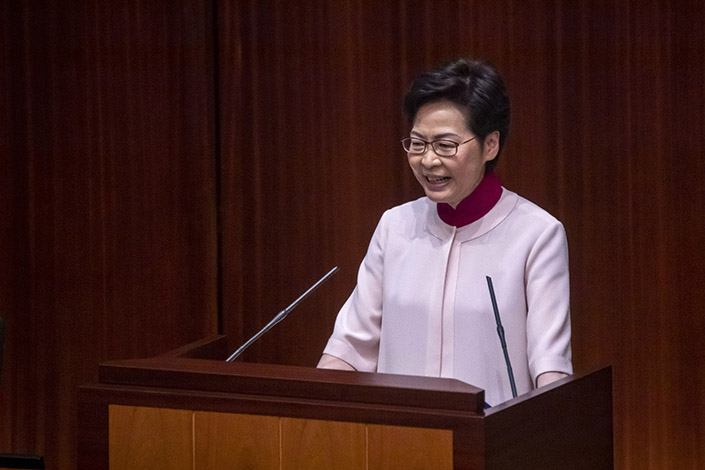 The National Security Law and Hong Kong’s electoral reforms have helped put the city back “on the right track of one country, two systems,” Chief Executive Carrie Lam said Wednesday as she outlined plans for the city’s future development, including in housing and luring talent.

The city has encountered “unprecedented political challenges” over the past two years, putting national security at risk, Lam said in the last annual policy address of her current term. The challenges mainly refer to the excessive politicization of local councils and some “deliberate” actions taken by “anti-government radicals,” according to her remarks.

However, the National Security Law, which Beijing imposed last year, has provided a “timely curb on the chaos,” she said, adding that governance has returned to normal under the double safeguards of the legislation and the principle of “patriots administering Hong Kong.”

To ensure the city’s long-term prosperity and stability, Lam suggested citizens have a more comprehensive understanding of “one country, two systems,” the principle that allows the former British colony to operate under a different system of governance than the Chinese mainland.

“I am confident that Hong Kong is much stronger than ever,” Lam said, noting that the city has ushered in a “new era” that is favorable to its economic development.

Lam announced that Hong Kong will develop an area in the north of the city that borders Shenzhen to ease the world’s most expensive housing market, considered to be a major source of local social unrest, with a focus on the development of innovative technology.

She has also decided to increase the annual quota of the Quality Migrant Admission Scheme, launched to attract global talent to work in Hong Kong, to 4,000 from 2,000 last year.

Lam’s comments came roughly two weeks after the Chinese foreign ministry issued a fact sheet listing a series of examples on how the U.S. has interfered in Hong Kong affairs and supported “anti-China and destabilizing forces” since 2019.

The chief executive’s 2019 address was disrupted and paralyzed by these forces, according to her remarks.

In June 2020, the Standing Committee of the National People’s Congress, the country’s top legislature, enacted national security legislation for Hong Kong to restore stability after nearly a year of social unrest that created uncertainty over the future of the Asian financial hub.

In March, the legislature approved a draft decision to improve the electoral system of Hong Kong in an effort to ensure the special administrative region, which the British handed back to China in 1997, is governed by “patriots.” Lam’s five-year term will end next June.