By Manyun Zou and Sun Yanran 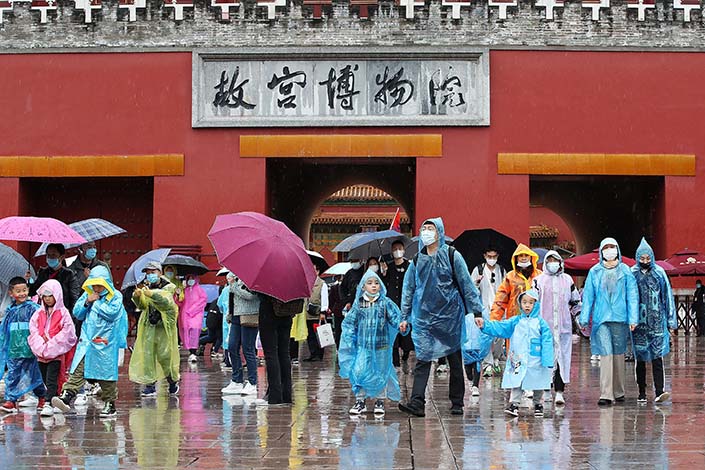 Tourists come out of the Forbidden City, a popular tourist attraction in Beijing, in the rain on Wednesday. Photo: VCG

China’s tourism spending over the weeklong holiday at the start of this month failed to recover to pre-Covid levels, official data showed, as local clusters of cases dimmed enthusiasm for travel.

More than 500 million domestic trips generated 389 billion yuan ($60 billion) of spending over the holiday to mark the People’s Republic’s founding that kicked off on Oct. 1, the Ministry of Culture and Tourism announced Thursday.

As the National Day holiday approached, two regions were working to suppress local outbreaks of the highly contagious delta variant of the coronavirus, Heilongjiang in the country’s Northeast and coastal Fujian province. During the holiday, cases were discovered in Northwest China’s Xinjiang Uygur autonomous region, disrupting holiday travel.

The recent holiday marks a turnaround from the three-day Labor Day break in May, during which the number of domestic trips was up slightly from the same period before the pandemic.

A survey carried out by the tourism ministry found almost 90% of travelers chose to visit places within 300 kilometers of their homes, and nearly half of respondents stayed within their province.

Meanwhile, separate data released by the Ministry of Transport showed that the average number of daily trips remained down 34% from 2019 at 57 million.

The data showed that Chinese travelers took about a fifth fewer airplane trips compared to last year’s holiday, and 2.9% fewer train trips. Around 8% fewer trips were taken on the country’s highways.

Boosted by the recently opened Universal Beijing Resort, which welcomed over 25,000 visitors a day, the Chinese capital was the most popular city for tourists, according to a report issued by travel platform Trip.com Group Ltd. The nearly 9 million trips made to Beijing brought in almost 11 billion yuan of revenue, with both figures reaching more than 90% of 2019 levels, the local government said.

Another bright spot was China’s box office. Revenue jumped 11% year-on-year to 4.38 billion yuan, getting within 1 billion yuan of the 2019 figure, according to ticketing platform Dengta. Korean War epic “The Battle at Lake Changjin” contributed over two-thirds of the total.

The bounce-back follows months of sluggish tickets sales. Just a week before the October holiday, box office receipts for the three-day Mid-Autumn Festival hit a four-year low, taking only 498 million yuan, a 40% drop from 2019, according to Dengta.

In late August, box office takings slumped when cinemas in some regions suspended operations in the wake of the outbreak that began in the eastern city of Nanjing and subsequently spread to almost 30 cities. According to Dengta, one-fifth of China’s cinemas were closed at the time.

Consumer spending in general saw some growth over the holiday. Residents spent 2.3 trillion yuan in the first six days of the holiday, beating the daily average of the eight-day 2020 holiday, according to a report from state-broadcaster CCTV that cited data released by China UnionPay, the country’s main bank card service provider.

During the same period last year, transactions totaled almost 2.2 trillion yuan, which was already a 6.3% lift on 2019, the official Xinhua News Agency reported.

According to another data set released by NetsUnion Clearing Corp., a central bank-backed clearinghouse platform, spending at restaurants and major cinemas surged 46% and 57% respectively.