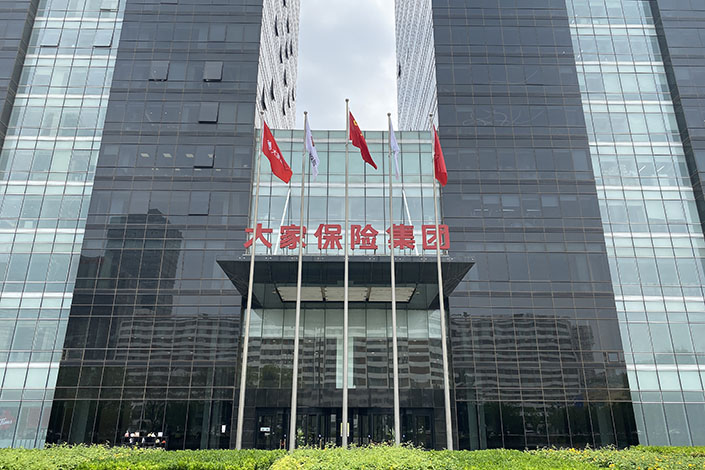 No company offered a proposal to bid on the 98.78% stake in Dajia Insurance Group Co. Ltd. Photo: VCG

The latest attempt to auction off the remaining assets of fallen conglomerate Anbang Insurance Group Co. Ltd. didn’t get even a single bidder, sources told Caixin, despite an attempt to bring down the price and a raft of incentives floated by regulators.

No company offered a proposal to bid on the 98.78% stake in Dajia Insurance Group Co. Ltd., the company created to take over Anbang’s core assets, by the Sept. 26 deadline, according to sources with knowledge of the matter.

The failure of the auction to go forward reinforces how difficult it has been for Dajia’s state-backed owners to find investors with both the financial heft and regulatory qualifications necessary to handle the company’s enormous business and complex problems, the sources said.

At the same time, the government’s inability to put Anbang’s remaining assets back into private hands after a two-year hunt for strategic investors shows how hard it will be for it to recover its investment in the bailout.

The plan to bring in strategic investors will probably be put on ice for the next three years, and Dajia will instead focus on improving its business, the sources said, citing company management at a recent internal meeting. However, it is regulators and Dajia’s biggest shareholder, China Insurance Security Fund Co. Ltd. (CISF), who have the final say on the matter.

The 98.78% stake in Dajia consists of a 98.23% stake held by CISF, the operator of a state-owned bailout fund, and a 0.55% stake owned by state oil giant China Petrochemical Corp., better known as Sinopec Group. When this year’s auction first started in July, the combined stake was valued at 33.6 billion yuan, but because no one was willing to bid, the valuation was later cut to 30.2 billion yuan.

One example is the consortium led by e-commerce giant JD.com Inc. and private equity firm Hopu Investment Management Co. Ltd. The two companies had participated in preliminary talks and expressed interest in bidding as much as 40 billion yuan for the Dajia stake, but JD.com later backed out, partly because it was unsure whether regulators would support an internet company taking a stake in an insurer, the sources familiar with the issue said.

Another reason for the reluctance to bid was that some companies weren’t convinced that the regulators would deliver on their promises. “The 30 billion yuan price is acceptable, but the key is whether supportive measures (promised by regulators) can be implemented,” said a source close to Hengli Group Co. Ltd., a Jiangsu province-based privately owned conglomerate that had showed interest in the stake, but in the end decided against going forward with a bid after talks with Dajia.

Financial regulators had floated four incentives to potential strategic investors for participating. First, the regulators suggested they might allow winning bidders to pay as little as 5 billion yuan first, and postpone payment of the rest by 15 months. That would have given the buyers plenty of time to raise money because obtaining Dajia’s insurance licenses would have given a boost to their creditworthiness, people close to the matter said.

Second, the regulators considered strongly supporting Dajia’s future IPO plan, if there is any, on the Chinese mainland. Third, they proposed exempting Dajia from a requirement to maintain certain solvency margin ratios, a measure of insurers’ ability to pay out claims, for three years. That would have freed the buyers from having to spend big sums replenishing Dajia’s capital in the near term. The last incentive involved supporting Dajia opening branches across the country.

However, even in the final phase of negotiations, Dajia’s representatives could not firmly commit to any of the incentives, the source close to Hengli Group said.

In addition, Dajia and some potential buyers disagreed over whether the current management team should stay or go after new stakeholders came in.

After a government team took over Anbang in early 2018 and set up Dajia the next year using CISF funds, it has directed the new insurer to focus on its core insurance business and sell most of other businesses.

However, Dajia’s moves to sell some of its domestic and overseas assets are facing challenges, thus posing risks to potential buyers. Some of the assets that Dajia received from Anbang had lost value amid the pandemic.

Dajia’s 17.8% stake in Shanghai- and Hong Kong-listed China Minsheng Banking Corp. Ltd. (600016.SH) is now down by around 60 billion yuan from what Anbang paid for it.

There are also uncertainties in selling some of the overseas assets that Anbang acquired during its high-profile shopping spree in the 2010s, such as Chicago-based Strategic Hotels & Resorts Inc., New York’s iconic Waldorf Astoria hotel and South Korean insurer ABL Life Insurance Co. Ltd., people with knowledge of the issue said.

It is too early to say whether the company will make or lose money from any overseas asset sale, as the quality of the assets will depend on the pandemic’s impact.

With the share auction looking like it will be postponed for the foreseeable future, Dajia’s management is weighing its options. At an internal meeting, senior managers said the company should try to replenish capital using operating income and ask regulators to exempt it from the solvency margin ratio requirement so that it can prepare for a future sale when the timing might be better, according to the sources familiar with the matter.