Anbang’s Remains Put Up for Sale With a $5.2 Billion Valuation

By Lin Jinbing and Wu Yujian 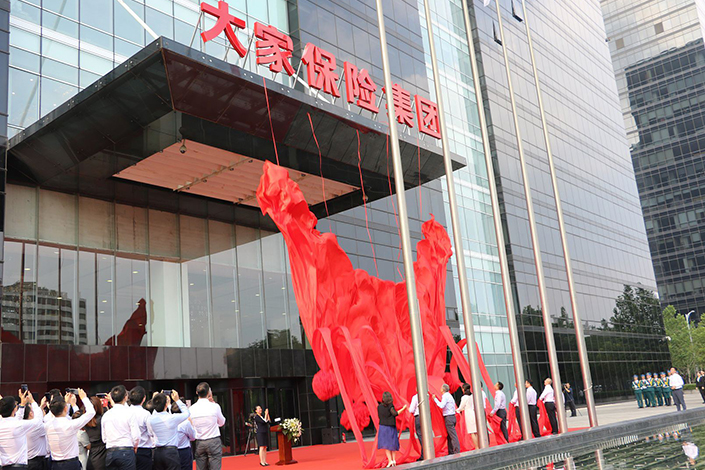 China is getting out of the Anbang bailout business, aiming to sell nearly 99% of the fallen insurance giant’s remains, now valued at 33.6 billion yuan ($5.2 billion), public records show.

The sale, which runs until Aug. 12, marks the government’s latest effort to put Anbang Insurance Group Co. Ltd.’s remaining assets back into private hands and recoup as much of its bailout funds as possible three years after taking over the scandal-ridden insurer. The restructuring is widely seen as a template for how China deals with debt-ridden companies that are considered too big to fail.

Industry bailout fund firm China Insurance Security Fund Co. Ltd. (CISF) and oil titan Sinopec Group, both state-owned, have put up for sale their respective 98.23% and 0.55% stakes in Dajia Insurance Group Co. Ltd., the company created to take over the assets, according to a post (link in Chinese) released Friday by the Beijing Financial Assets Exchange.

Anbang is among a group of high-profile Chinese giants whose reckless debt-fueled expansions in recent years brought them billions of dollars in assets both at home and abroad. Many have been forced to sell down their hoards, as Beijing in mid-2017 warned of risks posed by their enormous debt to the country’s financial system.

Behind the scenes, Anbang founder Wu Xiaohui leveraged his ties to a key political figure — his most recent wife is a granddaughter of late state leader Deng Xiaoping — and portrayed himself to outsiders as highly connected. By lobbying financial regulators and other government officials, Wu pushed for regulatory changes and controlled multiple financial institutions, which helped rapidly boost Anbang’s total assets to more than 3 trillion yuan in 2018, Caixin previously reported.

In 2018, Wu was sentenced to 18 years in prison for fundraising fraud and embezzlement.

Regulators took over Anbang that same year, marking the beginning of a state-led restructuring. Shortly after the takeover, CISF injected 60.8 billion yuan into the technically insolvent insurer — as of end-June 2018, Anbang’s total liabilities were 82.8 billion yuan greater than its total assets.

As part of the restructuring plan, CISF in June 2019 established Dajia, which absorbed Anbang’s core insurance and asset-management businesses, with an end goal of introducing strategic investors and turning Dajia into a privately owned company.

By June 2020, Dajia had accepted bids from two consortiums to become new investors — one consisting of Primavera Capital and Xiamen International, and the other including electronics giant TCL Technology Group Corp., Caixin revealed last year.

However, TCL later bowed out of the bidding due to the impact of the Covid-19 pandemic, which caused some of Dajia’s assets to lose value. With just one consortium committed to making an investment, CISF would have been left holding 63% of Dajia.

The restructuring plan flopped in the end, as it would not have turned Dajia into a privately controlled company, and could have resulted in a loss of the bailout fund firm, people with knowledge of the matter said.

That led to the current attempt to find new investors, with the primary goal to recoup as much of CISF’s 60.8 billion yuan investment as possible, the people said.