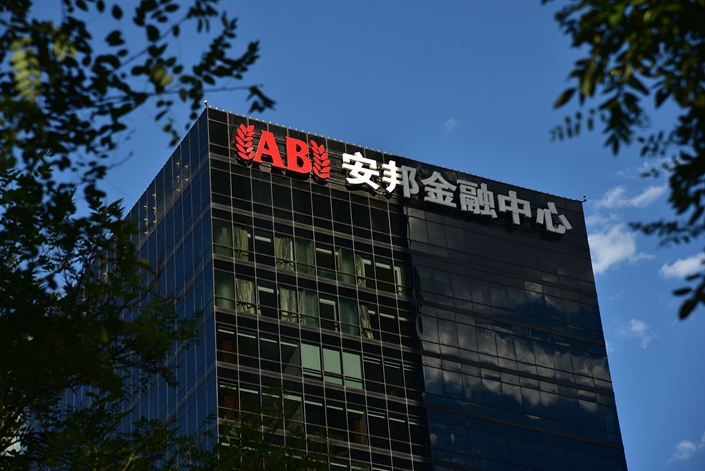 At a ceremony Thursday at Anbang’s Beijing headquarters, the logo on the building, which said “Anbang Insurance Group” in Chinese, was replaced with one reading “Dajia Insurance Group.” Photo: VCG

China’s insurance regulator said Thursday that the newly created Dajia Insurance Group will take over several of Anbang Insurance Group Co. Ltd.’s subsidiaries, the latest move in restructuring the fallen financial star since it was seized by the government.

The China Banking and Insurance Regulatory Commission (CBIRC) said in a statement (link in Chinese) that Dajia will receive Anbang’s stakes in its life insurance, annuity insurance and asset management subsidiaries, and some of the assets of its property and casualty insurance unit.

Anbang will be barred from getting into new insurance businesses after its subsidiaries are given to Dajia, though it will still be in charge of its existing insurance contracts.

A ceremony was held Thursday at Anbang’s Beijing headquarters, during which the logo on the building, which said “Anbang Insurance Group” in Chinese, was replaced with one reading “Dajia Insurance Group.”

CISFC, the state-owned bailout fund that is now the controlling shareholder of Anbang, holds 98.2% of Dajia.

Founded in 2008 by the Ministry of Finance, CISFC injected 60.8 billion yuan into Anbang in April 2018, two months after the government’s takeover of the company.

So far, Anbang has disposed of, or is in the process of disposing of, more than 1 trillion yuan of assets, CBIRC Vice Chairman Liang Tao said at a press briefing last week.

According to documents (link in Chinese) on the website of the National Enterprise Credit Information Publicity System, the legal representative of Dajia is He Xiaofeng, leader of the Anbang takeover group.

Dajia’s general manager will be Xu Jinghui, a deputy leader of the takeover group and former chairman of China Pacific Life Insurance Co. Ltd., according to sources close to Dajia.

Debt-ridden Anbang was taken over by regulators in February 2018. That May, its founder Wu Xiaohui was sentenced to 18 years in prison for fundraising fraud and embezzlement.

A rapidly expanding company since its founding, Anbang spent around $16 billion in an overseas acquisition spree over an 18-month period beginning October 2014, buying trophy assets including the iconic Waldorf Astoria Hotel in New York, but it ended up struggling to pay back its policyholders.