By Huang Huizhao and Cai Xuejiao 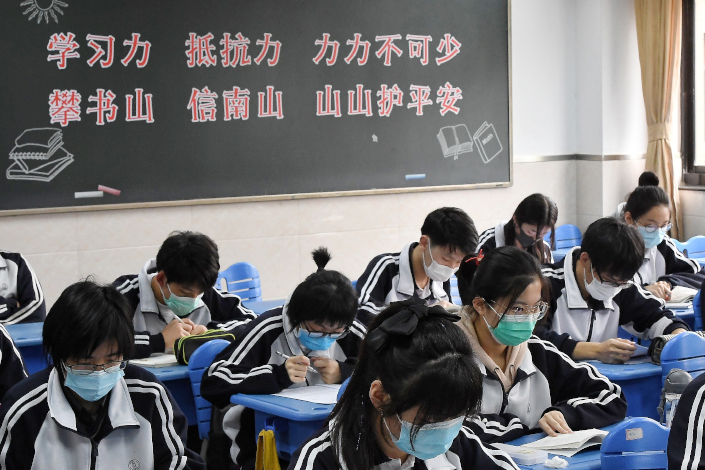 More than a dozen local governments have issued self-evaluation reports on tight school funding and the need for more public kindergartens, highlighting ongoing issues and regulatory challenges as the country implements new policies in its latest education reform campaign.

The reports, released since last month by the authorities of Guangdong, Zhejiang and Henan, among others, review the provinces’ educational performance since last year. They note an increased demand for public resources in compulsory education – which consists of six years of elementary school and three years of middle school – and highlight the need for more public school teachers.

China launched a sweeping overhaul of its private education sector in July, aiming to reduce the burdens of homework and after-school tutoring on students in a policy known as “double reduction.” The central government is also trying to curtail the growth of private schools across the country and direct the vast majority of students to public schools, noting that the proportion of students attending privately run schools should be cut to below 5%.

Many provinces noted that “tight purse strings” impacting on educational resources were a common problem, according to the reports. Central and West China’s Hunan, Anhui, Guangxi and Qinghai provinces noted tighter budgets for average public education spending per student in some regions and school grades compared with 2019.

And in the megacity of Shanghai, which has a relatively more developed economy, there are signs of a slowdown in fiscal investment in education. Last year, the city spent some 97.2 billion yuan on education, with a year-on-year increase of just 1.41%.

The reports also highlight challenges faced by local governments regarding their fiscal and governing capabilities, while the country pushes for more children to attend public kindergartens and more accessible institutions for pre-school education.

Central China’s Henan province noted the proportion of children attending public kindergartens had reached 33.5% last year, still lagging behind the target of 50% set by the State Council in 2018. The province has a shortage of nearly 100,000 full-time kindergarten teachers. Similarly, South China’s Guangxi province noted difficulties in running public kindergartens in some regions, with problems including large class sizes and insufficient places for new students.

Meanwhile, reports from Chongqing, Heilongjiang, and Fujian note clear development imbalances in pre-school education between urban and rural areas. Some kindergartens are relatively poorly resourced, while some kindergarten teachers receive low salaries and other benefits.

In the reports, many provinces including Guangdong, Zhejiang, Hunan and Fujian also highlighted the issues regarding shortage of teachers for public schools.

Guangdong has proposed that by 2025, the province will add 4.38 million spots for public schooling, including 330,000 in kindergartens, 3.75 million in primary and middle schools, and 300,000 in high school, which will generate the demand for more than 250,000 teachers for such schools.