By Cai Xuejiao and Lin Yunshi 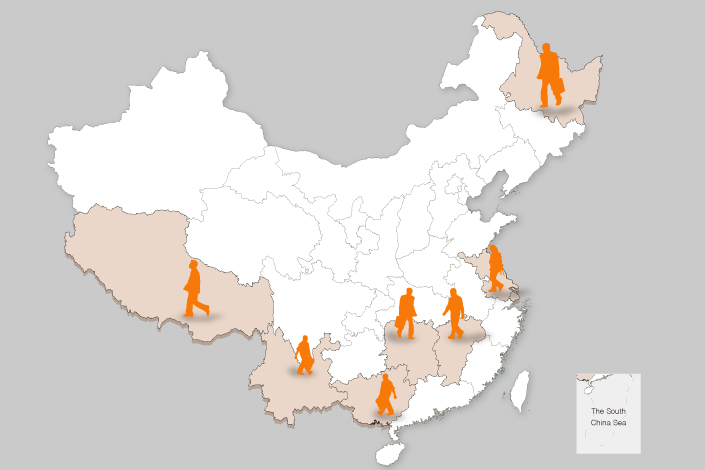 The naming of the regional chiefs comes as the provinces are due to hold congresses later this year to complete a reshuffle of provincial party committees.

China has named new party chiefs of seven provinces in the latest political reshuffle of regional leaders, according to the state-run Xinhua News Agency, following similar appointments in five other provinces.

The Communist Party’s Central Committee has named the officials who will replace the retiring party secretaries of Hebei, Jiangsu, Jiangxi, Heilongjiang and Yunnan provinces and the Tibet and Guangxi Zhuang autonomous regions. The appointments were announced at provincial-level meetings of leaders and cadres on Tuesday.

The naming of the regional chiefs comes as the provinces are due to hold congresses later this year to complete a reshuffle of provincial party committees. The 20th National Congress of the CPC is due to convene next autumn and elect members of the Communist Party’s Central Committee for a five-year term.

The party has this year named new chiefs for a total 12 provinces. Northwest China’s Gansu province was the first to make an appointment on March 31, followed by Shanxi and Henan on June 1, and Anhui and Shandong on Sept. 30, according to state media.

According to the Tuesday announcements, Xu Qin, governor of North China’s Hebei province, was named as the party secretary of the northeastern province of Heilongjiang. Xu replaces Zhang Qingwei, who has been named party chief of Central China’s Hunan province. Zhang replaces former Hunan party chief Xu Dazhe who is retiring at 65.

This is the second time that Xu has stepped into Zhang’s shoes. In early 2017, Xu, then the party chief and mayor of the southern city of Shenzhen, was named Hebei governor, replacing Zhang who moved to serve as Heilongjiang’s party chief.

Xu, 60, served in Shenzhen from 2008 to 2017, following positions at the National Development and Reform Commission. Since the establishment of the Shenzhen Special Economic Zone, five officials who had served the city’s party chief have been promoted to party chief or governor of provincial-level regions.

Wu, a Jiangsu native, is the youngest provincial party chief to also govern his own home province. He previously served in Chongqing municipality between 1999 and 2014 before he was named as the party secretary of Shanxi’s capital Taiyuan in 2014, following a major reshuffle of the province’s party committee due to corruption probes. He then returned to Jiangsu in 2016 to serve as party chief of its capital Nanjing and was promoted to provincial governor in 2017.

Wang Junzheng, who served as deputy party chief of the Xinjiang Uygur autonomous region, on Tuesday was named as party chief of Tibet, replacing Wu Yingjie who is retiring at the age of 65. Wang’s appointment came just over a week after the naming of the new acting chairman of Tibet, Yan Jinhai, on Oct. 8.

Prior to his role in Xinjiang, Wang, 58, has served in senior posts in Yunnan, Hubei, and Jilin provinces. In 2018, he was the party chief of Changchun, the capital city of Jilin, when a major Chinese vaccine manufacturer based in the city, Changchun Changsheng Life Sciences Ltd. was found to have been producing and selling substandard drugs, and several officials in the city were held accountable. A meeting chaired by Wang in August that year urged local officials to reflect on the scandal.

Wang is also the latest of four officials hailing from East China’s Shandong province to hold the top post in the Tibet since the 2000s.