By Manyun Zou and An Liming 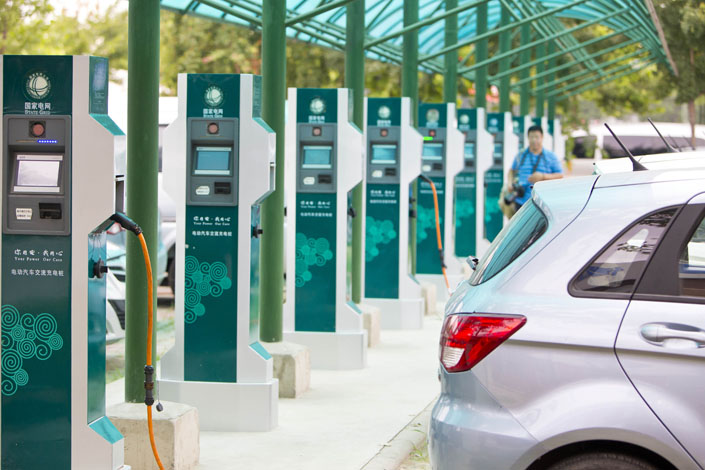 Electric cars charge their batteries at a charging station in Beijing. Photo: VCG

As sales of new-energy vehicles (NEVs) continue to set new records, China wants manufacturers to take greater responsibility for quality problems linked to battery and control systems in the wake of numerous recalls and safety incidents.

The Ministry of Industry and Information Technology issued draft guidelines (link in Chinese) Wednesday urging NEV-makers to closely supervise their battery and software suppliers, regularly evaluate them, and get them to improve battery safety.

The guidelines also propose that the automakers develop comprehensive safety monitoring and management systems so they can continuously diagnose vehicle data, respond to emergencies at anytime, and analyze incidents in-depth, among other goals. The draft guidelines are open for public comment until Nov. 20.

There were 34 fire incidents involving NEVs in China in the first five months of this year, up 142% from last year, according to industry research institute GGII.

By the end of June, almost 1.3 million electric vehicles with defects had been recalled in China, accounting for 22.13% of total NEVs in the market, State Administration of Market Regulation (SAMR) figures showed.

In June, Tesla recalled nearly 300,000 China-made and imported Model 3 and Model Y vehicles sold in the domestic market because the autopilot systems were found to be too easily activated during driving and could potentially cause a crash. Xpeng also recalled almost 15,000 of its G3 models in February over a potential inverter problem that could cause the vehicles to lose power while driving.

Another SAMR report (link in Chinese) shows that customers filed over 1,000 complaints about NEVs last year to the market watchdog, almost half of which were related to batteries, motors, and control systems.

Beijing has been working hard to boost NEV sales. According to a State Council plan, purely electric vehicles are intended to become the “mainstream” of new vehicles sold by 2035. Becoming “mainstream” means making up over half of new vehicle sales, a source close to the matter told Caixin.

Sales of NEVs in China continue to write new records this year. In September, they set another new monthly high with over 357,000 sold in a single month, a 148% jump from the same time last year, China Association of Automobile Manufacturers data shows. The result means that NEVs accounted for 17.2% of the month’s overall vehicle sales, a level that is approaching the government’s target of 20% set for 2025.

More regulations specific to NEVs are being developed. In August, new guidelines required automakers to better manage the data they collect in China and improve the safety of self-driving cars. Last October, a new policy urged NEV-makers to report incidents involving loss of control, unintended acceleration, and fires in their cars within 12 hours of the event, or within six hours in cases involving injuries or casualties.