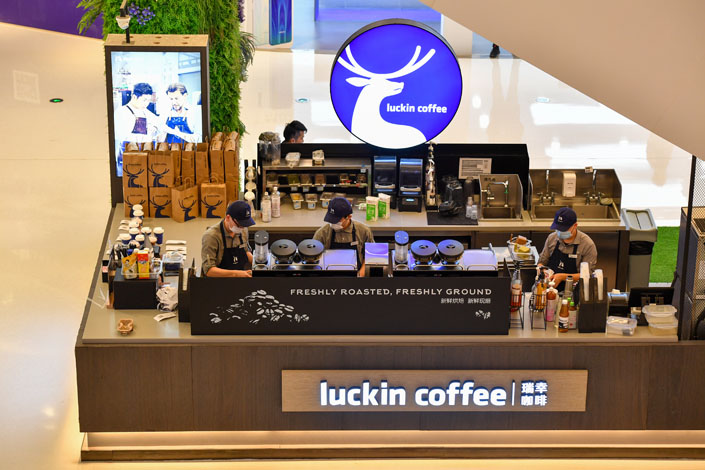 Scandal-dogged Luckin Coffee Inc. said it managed to pare its losses by over 1 billion yuan during the first half of this year, as it sold more coffee at higher prices, eased off on its previously breakneck expansion and increasingly tapped the franchise model.

In its Thursday exchange filing, the embattled coffee chain reported a net loss down 86% yearly to a 211.4 million yuan ($33 million) deficit while the net revenue was 106% higher than previously reported figures at 3.18 billion yuan.

This upbeat performance comes after a scandal one year ago in which the firm was caught faking financial numbers, leading to its delisting from the Nasdaq.

The four-year-old Starbucks challenger, which had previously relied on aggressively subsidizing its products to lure customers, was selling its beverages at an average price of 14.5 yuan in the first half, nearly twice the price given for the fourth quarter of 2019.

A Luckin insider who asked not to be named told Caixin that this increase in prices was driving the reduction in losses.

If that is the case, the higher prices don’t seem to be putting customers off. The chain said the number of its average monthly customers reached a record high of 10.5 million during the first half, a 35.1% increase from the 7.8 million it reported in the same period last year. The company said that average monthly total items sold also jumped over 41% year-on-year to almost 32 million units.

As a result, same-store sales growth, a gauge of total revenue from similar types of stores, was also up 82.7% yearly in the first half. Last year, amid measures to control the spread of Covid-19, the figure reportedly slumped over 20%.

Since the scandal rocked the company, it has focused more on franchising, with partnership stores in which the franchisee pays Luckin for ingredients and equipment, and offers Luckin a share of the profits.

Of Luckin’s 5,259 branches in China, about a fifth are now run by franchisees. The firm now operates about 500 fewer stores than when the fraud was revealed, but has added 700 franchised stores. The firm has a bigger footprint than Starbucks, which operates 5,100 domestic stores.

Franchisees in third or fourth-tier cities in China typically need to sell about 150 cups a day to break even, the Luckin source told Caixin.

But while franchising may be a source of growth, Luckin’s accounting scandal continues to weigh on both the company’s reputation and wallet. As of June, the company had already incurred 630 million yuan of losses and expenses related to the fraud, with about a quarter of that spent on legal fees, professional fees, and other related expenses in the first half.

In April last year, Luckin admitted it had inflated its 2019 sales by more than 60% through fabricated customer and transaction data. Five months later, a group of 45 companies involved in the fraud were fined 61 million yuan by China’s market watchdog. In December, Luckin agreed to pay the U.S. Securities and Exchange Commission $180 million to settle fraud charges.

The case triggered a wave of backlash from American regulators and politicians against U.S.-listed Chinese companies. The U.S. Senate subsequently passed a bill that would ban listing of companies that don’t comply with certain financial transparency requirements.

This year February, the company filed for bankruptcy protection in New York, with the aim of insulating its business in China and shielding itself from further lawsuits by U.S. creditors.

It reported 6.8 billion yuan of total liabilities in the first half, just 3.4% higher than the same period last year, and it currently has cash and cash equivalents valued at 5.08 billion yuan.

The coffee chain’s American depositary shares surged 4.44% when the market opened on Thursday, but soon plunged and closed at $15.88.