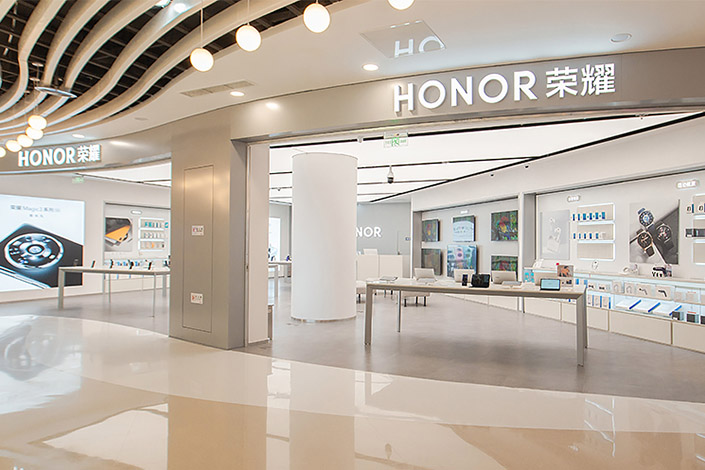 Honor Device Co. Ltd., the smartphone brand jettisoned by Huawei last year, announced Wednesday on social media that it has launched its flagship Honor 50 series in multiple overseas markets including Britain, France and Germany, as it seeks to claw back market share around the world.

Honor launched the Honor 50 series in China in mid-June, and later announced international models would come preinstalled with Google Mobile Services (GMS), meaning that users will have access to popular apps like Google Play, Google Maps and Gmail.

Weak consumer demand and a shortage of core components tanked Chinese smartphone shipments in the third quarter, according to a report by Counterpoint Research.

In the three months through September, China shipped 76.5 million smartphones, down 9% year-on-year, with Vivo taking the sales crown with a market share of 23%, according to the report.

Realme, in seventh place, had the highest year-on-year shipment growth of 682%.

Chinese ride-hailing company T3 Chuxing it has raised a staggering 7.7 billion yuan ($1.2 billion) in a series A funding round led by Citic Group, as institutional investors bet big on its ability to snatch market share from industry leader Didi Chuxing, which dramatically fell afoul of regulators earlier this year.

T3 Chuxing said the round, thought to be the largest of its kind in China this year, will help it “increase its investment in user service improvement, product innovation, technology research and development, and autonomous driving.”

T3 Chuxing, backed by state-owned carmakers FAW, Dongfeng Motor and Changan Automobile, said that it operates in 41 cities and has more than 54 million registered users.

Beijing-based AI security technology startup RealAI said Thursday that it has closed a 300 million yuan ($47 million) series A funding round joined by a group of investors including Ant Group, Delta Capital and Koala Fund, giving it a valuation of billions of yuan.

RealAI, backed by top Chinese university Tsinghua, said that it will spend the money to increase investment in the research and development of its AI infrastructure platforms related to data security and privacy computing.

Hozon said that it sold 41,427 electric vehicles in the first nine months of this year, quadruple the number it had in the same period of last year.

It comes as a global microchip crunch continues to crippled supply chains of everything from autos to consumer electronics.

Discussions between Sony, TSMC and Japan’s Ministry of Economy, Trade and Industry over the partnership are still underway. But Sony could share its expertise in its Japanese chip operations with TSMC as well as making the proposed plant one of its suppliers of logic chips, Totoki said Thursday during a news conference announcing Sony’s half-year earnings, according to Nikkei Asia.

The Cyberspace Administration of China (CAC) on Friday issued draft rules on how to manage the cross-border flow of data two months after the new Data Security Law came into force on Sept. 1.

The company said that the decision is made to comply with China’s regulations aimed at reducing the burden on students from homework and after-school tutoring.

Smartphone maker Oppo’s nascent health lab will ramp up efforts to build its own health apps capable of providing accurate physical data to users of its smart wearable devices, its head Zeng Zijing said Wednesday. The lab will also focus on developing technologies that can explain what such health data means for human body.