By Bao Zhiming and Cai Xuejiao 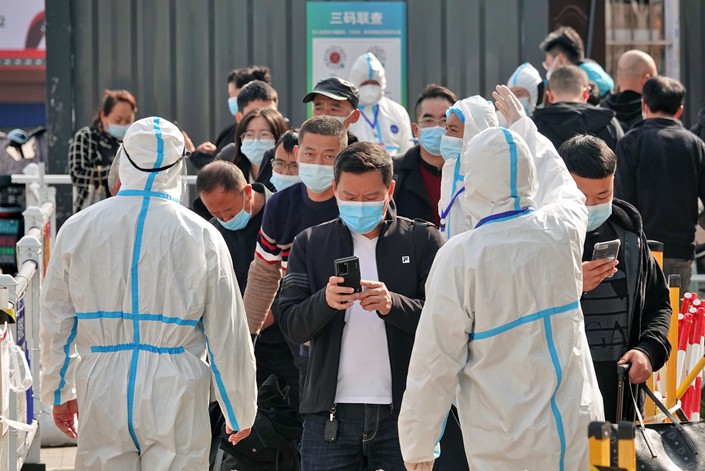 Epidemic prevention personnel conduct a "three-code" joint check on the health code, travel code and novel coronavirus vaccination records of departing passengers at the exit of the Yantai Railway Station in Shandong Province on Nov. 2. Photo: The Paper

China will need to continue its “zero tolerance” strategy against Covid-19 with nationwide emergency responses, including maintaining long quarantines and vigorous contact tracing, until a “barrier of immunity” has been established, a top Chinese epidemiologist said.

Zeng Guang, former chief epidemiologist of Chinese Center for Disease Control and Prevention (China CDC), made the remarks in a speech delivered at a forum during the China International Import Expo. He added that after establishing the immunologic barrier, China will then enter the next phase of normalizing its disease control and prevention work, which will last for a period of one or two years. “During this period, not as many compulsory quarantines and lockdowns would be needed,” he said.

Zeng acknowledged that the global challenges in containing the delta variant will mean that society must learn how to coexist with Covid-19. He added that, historically, humans have only been able to eradicate smallpox because of the virus’ characteristics: one, humans are the only host; two, the pathogen is stable and not prone to mutating; and, three, the symptoms are typical and do not include mild and asymptomatic infections. However, Covid-19 is unlike the smallpox virus and, thus, it will likely coexist with humans for a long time.

China has largely brought its domestic spread of Covid-19 under control since adopting a “zero tolerance” policy early last year, although regional flare-ups of the globally widespread delta variant continue to appear.

The recent local Covid-19 outbreaks in mainland China that began in mid-October have spread to 20 out of 31 provincial-level regions, with more than 1,000 locally transmitted infections recorded in dozens of cities as of Monday, according to health authorities.

Prominent infectious disease expert Zhong Nanshan has defended the “zero-tolerance” strategy in a state media interview, saying that measures to deal with sporadic Covid-19 outbreaks are less costly than treating patients after they’ve been infected.

China needs to find out the best Covid-19 vaccine booster shot combination that is sustainable, he said.

Several Chinese cities have offered booster shots to certain groups of adults amid the sporadic outbreaks. Since late last month, Beijing city authorities have also begun offering booster shots to adults who have been fully vaccinated for at least six months.