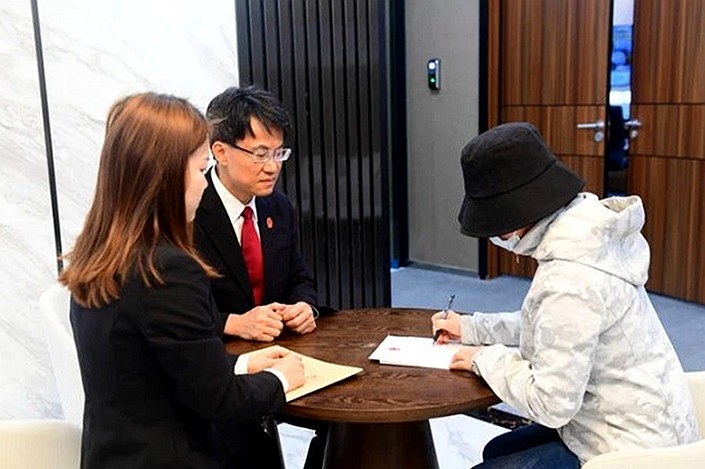 A citizen signs a verdict at a Shenzhen court on Monday in South China’s Guangdong province. Photo: szcourt

A court in the southern business hub of Shenzhen has approved China’s first personal bankruptcy liquidation (破产清算), another step forward in building a legal framework that will allow millions of individuals across the country to reorganize their debts and make a fresh start.

Hu Xuhui, a local resident who didn’t have enough assets to pay her liabilities, was declared insolvent, a process also known in China as bankruptcy liquidation, according to a ruling (link in Chinese) published Tuesday by the Shenzhen Intermediate People’s Court. She will now be subject to restrictions on luxury spending and work for three years and any new assets she earns or acquires, above an agreed monthly budget for living expenses, will be distributed to creditors. After that, she will be discharged from bankruptcy and the restrictions once the court gives the green light.

Forty years of reform and opening have led to an explosion in private business and a burgeoning consumer society. But the country still lacks a national legal framework to deal with individuals who can’t repay their debts, although a bankruptcy law for enterprises (企业破产法) went into effect in June 2007.

It was only in July 2019 that the National Development and Reform Commission and a dozen other central government agencies including the Ministry of Justice and the banking regulator said they would study a mechanism for insolvent individuals to file for bankruptcy, focusing initially on business-related bankruptcy and then on consumer debt. Shenzhen was chosen as a testing ground for the new system.

The local regulations in Shenzhen took effect in March and in July, the Shenzhen intermediate court approved the first bankruptcy reorganization plan (重整) for a local businessman, Liang Wenjin, ordering him to repay the principal to creditors within three years but exempting him from paying interest and late-payment penalties. The court has also dealt with cases where debtors and creditors reached an agreement through conciliation.

Hu’s case is different. She was declared insolvent and her unpaid debts can be discharged after three years. Hu had a company and borrowed more than 4.8 million yuan ($750,000) from banks and friends but as an individual because the business was too small to apply for corporate loans, the court said. The company closed down and she couldn’t repay her debts.

Hu’s total assets were valued at around 300,000 yuan but her registered liabilities were just over 920,000 yuan, according to the ruling. Both the administrator, a local law firm, and creditors agreed for her to be declared insolvent, the court said.

The cases reflect the need to offer legal solutions to help individuals who rack up debts they can’t repay. With no law to guide the courts, people don’t have the same protection as companies and can face unlimited repayment obligations for their business debts and for their own personal debts.

As a result, many debt-laden private entrepreneurs have chosen to flee, leaving creditors on the hook and making life difficult for courts, which have struggled to rule on debt disputes when they could not find the debtors or assets that could be used to compensate creditors. Individuals who have built up too much personal debt are often chased by unscrupulous debt collectors and subjected to threats or violence.

But while the government recognizes that debtors need to be treated fairly through a legal process, there are concerns that allowing individuals to be declared insolvent or undergo a bankruptcy reorganization may encourage many to use the law as a way to avoid repaying their debts. That would be unfair on those who lent the money in the first place and could increase the proportion of bad debts for many financial institutions.