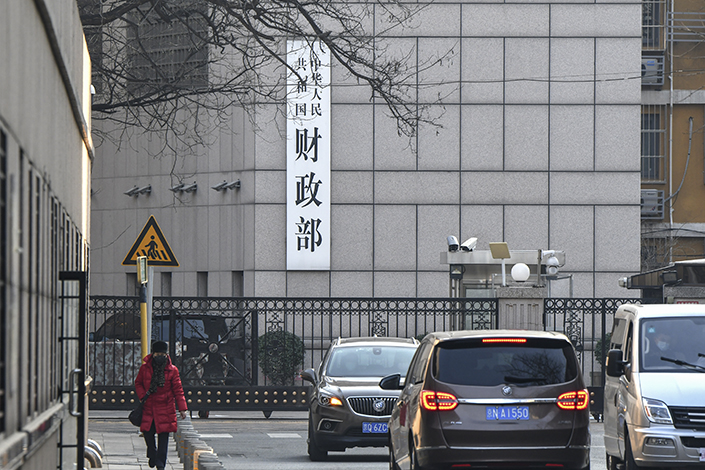 A person walks outside the Ministry of Finance in Beijing in Dec. 2020. Photo: VCG

China has spelled out more clearly how local governments can change the way they use the money raised from selling special-purpose bonds (SPBs), aiming to tackle problems including misuse of funds and embezzlement.

The Ministry of Finance on Thursday released a guideline (link in Chinese) that sets out qualification standards, procedures and information disclosure requirements for local governments seeking to adjust the use of SPB proceeds. The ministry said the rules would strengthen management of the bonds and guard against risks.

The guideline marks the latest step taken by the central government to step up oversight of SPBs which were introduced in 2015 to fund commercially viable infrastructure and public welfare investments. They are meant to be repaid using income generated by the projects they fund but due to poor management and a lack of suitable investments, billions of yuan have sat idle or been used for purposes not allowed by the regulations. Local governments have been given an overall SPB quota of 3.65 trillion yuan ($570 billion) for 2021, down from a record 3.75 trillion yuan last year when the country was hard hit by the pandemic.

The finance ministry in 2018 began to allow adjustments to the use of SPB proceeds. However, audit authorities found that some local governments ended up using the money to pay salaries and travel expenses, or to buy wealth management products, which not only contravened the letter and spirit of the regulations but also posed risks to their ability to finance interest payments and repay the bonds.

The new guideline makes it clear that adjustments should be taken as exceptions to the norm and that local governments should work on the basis that once an SPB is issued, funds must be used strictly in accordance with the purposes disclosed in the prospectus. If changes are needed, lower-level governments must get approval from the provincial-level government and register their new plans with the finance ministry, it said.

The guideline said local governments can only apply to modify the use of SPB funds under certain circumstances, such as when an investment project has funds left over after it’s been completed or if violations are found in the original project supported by the SPB.

Provincial governments should disclose information related to the adjustments in a timely manner and this should include the investment plans for the new project, the expected rate of return, other sources of funds, a risk assessment, a third-party credit rating, and legal reports.

The ministry also gave provincial governments the authority to scale back annual quotas for lower-level governments who make frequent and significant changes.

The government has named and shamed authorities who have misused SPBs over the past two years. An investigation by the National Audit Office ordered by the State Council last year as part of its annual report on the use of budgetary funds found that the bonds had been poorly managed with funds used to finance unprofitable projects.

The report, which was presented to lawmakers in June, revealed that some 41.3 billion yuan, or 3.25%, of the 1.27 trillion yuan of outstanding SPBs issued by 55 local governments were not used for the intended purpose. Some local governments invested 20.5 billion yuan in projects that had no income or whose annual income was insufficient to pay the principal and interest, prompting serious concerns about their solvency, the report found.

Vice Finance Minister Xu Hongcai flagged tightening supervision in August when he reported on implementation of the 2021 budget to lawmakers. He also said the ministry would step up monitoring of projects supported by SPBs and organize regular checks on the use of bond funds.

In June, the ministry issued new rules specifying that the allocation of SPB quotas for local governments will be linked to performance targets for the projects the bonds fund. A project operator or supervisor must set a performance target before seeking authorization to issue a bond. The ministry and provincial finance departments will take performance results into account as a factor in adjusting the allocation of SPB quotas for individual local authorities.