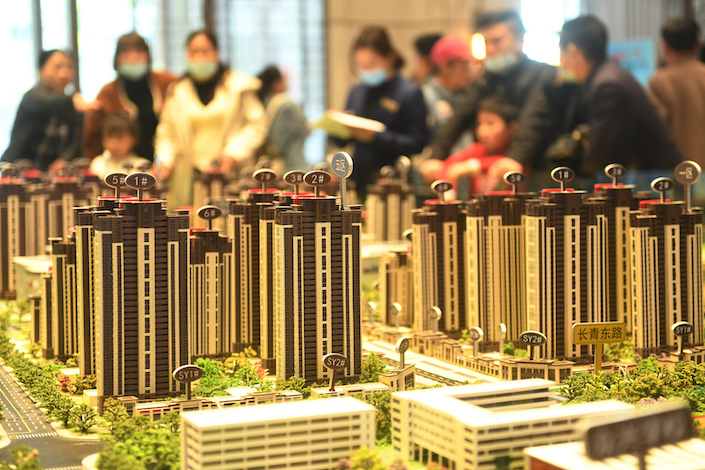 Chinese banks increased mortgage lending to $54.5 billion in October, a 41% jump from September.

Since Oct. 15, the China Real Estate Association, the Development Research Center of the State Council, the State Administration of Foreign Exchange and the National Association of Financial Market Institutional Investors have hosted four meetings with developers.

Holding that many meetings at a national level focusing on the sector within a month is rare, property research firm China Index Academy said Thursday in a report. Financing will be the focus of fine-tuning real estate market policy in the near-term future, the academy said.

Mortgages up, rates down

Banks extended 348.1 billion yuan ($54.5 billion) of mortgages, an increase of 101.3 billion yuan or 41% from September, the central bank said. Analysts attributed the jump to a correction from over-implementation of real estate lending policy since late September. Banks started accepting new mortgage applications in October after a suspension of a few months in compliance with a mechanism introduced in December by the central bank and the China Banking and Insurance Regulatory Commission (CBIRC) to cap banks’ outstanding property loans as a proportion of total loans and their ratio of outstanding mortgages to total loans.

Financing has become increasingly difficult for developers as a result of the government’s “three red lines” policy imposed last September. It sets limits on financial institutions’ liabilities-to-assets ratio, net gearing ratio and cash-to-short-term debt ratio. Now there are signs of some easing. The National Association of Financial Market Institutional Investors (NAFMII), a self-regulatory body for the interbank bond market, reportedly held a meeting with developers Tuesday. Some developers disclosed plans at the meeting to sell bonds on the interbank market.

Total financing of property developers was 36.5 billion yuan in October, down 74.8% year-on-year and 60% from September, the biggest monthly decline since 2021, data released by property research firm China Index Academy showed.

Even though there are some corrections in financing policy, it will take time to affect the market, China Index Academy said in a report.

Financing for real estate companies is unlikely to be loosened on a large scale, said Pan Hao, a senior analyst at the Beike Real Estate Research Institute. Credit will still be limited under the three red lines framework, but the overly tight financial environment will ease, Pan said.

Some banks misunderstood the three red lines policy and tightened credit to developers by too much, said Zou Lan, head of the financial market department at the People’s Bank of China in an Oct. 15 news briefing. The central bank told lenders to keep credit to the real estate sector “stable and orderly,” he said.

But banks are still cautious about extending loans to developers. The head of a bank in Guangzhou told Caixin that the real estate sector is in a downturn, so it’s natural for financial institutions to cut their exposure.

An executive from a major state-owned bank said many banks now lend money only to state-owned developers because “who knows which private property company will collapse tomorrow?” After the central bank told banks to maintain “stable and orderly” credit to the real estate sector, banks only dare to extend mortgage loans to home buyers, the executive said.

If funds flow only to state-owned developers and a few private businesses with solid finances, it won’t help solve the problems of the industry as a whole, the head of the Guangzhou bank said.

At present, the proportion of developers with debt risk and funding pressure is not large across the sector, and an industrywide debt crisis is unlikely, said Feng Jun, president of the China Real Estate Association, at a forum Wednesday.

“We should not let short-term problems in the real estate market damage the structural and systemic health of the macro economy,” he said.

There are also rumors circulating in the market that authorities in some cities, such as Shenyang, the capital of northeast China’s Liaoning province, are considering loosening restrictions on house purchases. But the Shenyang Municipal Housing Administrative Bureau said on its website Thursday that current housing purchase and sale restrictions and other policies have not changed.