By Zhao Xuan and Manyun Zou 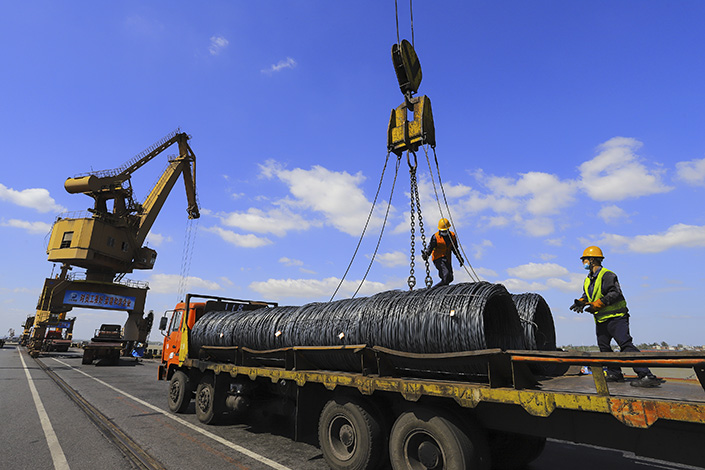 China’s steel future prices have plunged more than 20% in the past month as decreased infrastructure spending and property market turbulence cooled demand.

The major contract price for deformed steel bar on the Shanghai Futures Exchange fell 3.51% to 4,183 yuan ($655.50) per ton on Monday — its lowest since early February. Deformed steel bar prices have been sliding sharply since mid-October, and it has since fallen by 28%.

Another steel product futures’ price, the hot-rolled coil, also dropped 2.87% to 4,433 yuan per ton on Monday, plummeting 25% compared to its previous high on Oct. 11.

While steel prices sank “dramatically” in October due to the shrinking demand, the industry had already felt the pressure as early as the third quarter, said Luo Tiejun, vice-chairman of the China Iron and Steel Association (CISA), at a forum on Friday.

The weak demand for steel can be ascribed to many factors, including fewer new developments in the real estate sector due to tightened bank lending to developers, decreasing infrastructure investment for the sake of slowed special bonds by local government, as well as disrupted automobile production because of chip shortage.

As of the end of October, major steel producers’ inventories were up 7.45% month-on-month to 12.8 million tons, according to CISA. This inventory increase also marks a 10.53% surge from earlier this year.

The figures from mysteel.com show that for 1 ton of deformed steel bar in October, producers earned 246 yuan in profit on average, which is a more than two-thirds decline compared to last month. The average profit for making hot-rolled coil also dropped by more than half.

Some listed steel producers saw a drop in their profits for the third quarter. According to quarterly statements, Shanghai-listed Anyang Iron & Steel Inc. (600569.SH) reported a 28% yearly drop in its net profit over the three months to September — attributed to the parent company — while the number for the first nine months this year surged more than 50-fold. Shenzhen-listed Sansteel Minguang Co. Ltd. Fujian (002110.SZ) also reported a 21% drop year-on-year in the third quarter’s profit, while the first three quarters’ profit increased 70% in total.

Meanwhile, China is on its track to cut steel production this year. The output of crude steel, the raw ingredient for steel products like the deformed steel bar, was down 23.3% yearly to 71.5 million tons and nearly 3% month-on-month in October, National Bureau of Statistics figures showed.

Wang Yingsheng, the deputy secretary-general and chief economist of CISA, had said in late October that if output continues to decline in the fourth quarter, total annual production will likely be down about 30 million tons to just over 1 billion tons. The drop would see through the government’s target of decreasing annual output year-on-year to meet the country’s green ambitions.

At the Friday forum, Luo predicted that steel producers’ financial performance would be hurt further by the decreasing prices in the fourth quarter.