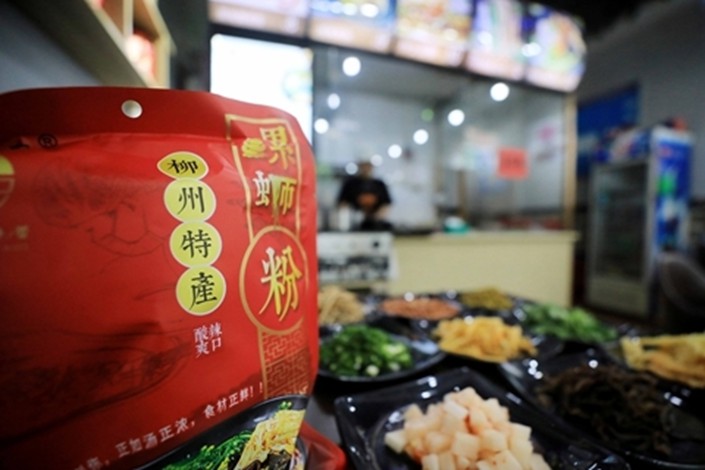 Liuzhou’s luosifen could be called one of the four most foul-smelling foods in the world. Photo: VCG

A family stroll down a food alley provides an opportunity for Chinese economist Li Jingkui to share about the Coase theorem, while holding his breath and fleeing a luosifen stall and its pungent smells. If rights of stallholders are defined and transaction costs are low, then the optimal value of resources in society will be realized. That is, either the luosifen moves away under some compensation from his neighbor or it stays put and his neighbors cope with the negative externalities this presents.

It was crowded everywhere during the Golden Week holiday. One evening, my family decided to get some small bites at the city square near our house. As soon as we arrived, a pungent odor greeted us. Ah, we spied a new luosifen (螺蛳粉, literally river snail rice noodles) stall in the food alley.

Liuzhou’s luosifen could be called one of the four most foul-smelling foods in the world, together with South Korea’s hongeo (fermented skate served sashimi-style), Sweden’s surströmming (lightly salted fermented Baltic Sea herring), and France’s blue cheese. Their level of pungency is unique unto themselves. Compared to these greats, the common stinky tofu is not a big deal at all.

I once watched a U.S. television program about trying exotic foods. One of the episodes was on trying surströmming. It is reportedly illegal to open a can of surströmming in a crowded indoor space. Passengers are also banned from bringing it onto airplanes. This goes to show just how feared the smell is. While the host was mentally prepared and had much experience trying strange foods, as soon as he opened the can of fermented Baltic sea herring, he almost passed out from the pungent odor. One can imagine how potent luosifen’s pungent aroma is if it’s in the same “grade” as surströmming.

When one makes a beeline away from a stall

Luosifen is a specialty of the city of Liuzhou in Guangxi. While this dish recently became unexpectedly popular in China, people also often gripe about its stench, saying it smells like a toilet that has never been washed and that they would avoid coming into contact with it at all costs. But though it has a pungent aroma, luosifen is a delectable dish and many people do enjoy its uniquely fresh and spicy flavor. Alas, though fans of luosifen adore its taste, the people around them suffer.

Now that a luosifen stall has opened in the city square’s food alley, many people quickened their pace as they passed the stall to avoid the smell. As a result, other food stalls near the luosifen stall are losing customers. We were among those who held our breath and sped up, only breathing a sigh of relief some distance away when we could take in some fresh air again.

After hearing what my wife had to say, I realized that this would be the perfect chance to conduct some economic analysis. I asked her, “Dear, what would you do if you owned the stall beside the one selling luosifen? Let’s consider two situations: one, the luosifen stall was here first; and two, your stall was here first.”

My wife replied, “Well, if the luosifen stall was already there, I would definitely ask the landlord for a lower rent, unless the luosifen stall would have no impact whatsoever on my business. But then, are there people who detest eating luosifen but love its smell?”

We broke out in laughter.

I then asked my elder daughter, “If you were mummy’s landlord, what would you do?” She replied nonchalantly, “I would ask the luosifen stall to compensate me!”

My daughter replied, “Then what do we do? If that happens, aren’t the people doing business beside the luosifen stall very unlucky?” She clearly felt that the situation was unfair.

Grin and bear it, or pay for it

Ah, the chance to explain the counterintuitive behavior of economics to my daughter has presented itself.

I said, “Actually, the situation isn’t that bad. If you own a small eatery of higher market value beside the luosifen stall, you can make a deal with him. Since you have a better business, why not give him some money and ask him to move elsewhere? From a societal perspective, you are transferring a portion of your income to the luosifen stall owner, keeping your rights to profit, while realizing the highest possible value of your business at the same time. On the other hand, the luosifen stall owner would receive his compensation to set up shop elsewhere. His losses are also acceptable from a societal perspective.”

My wife thought about it and said, “Oh, that makes sense! So, if the luosifen stall owner does not have the right to spread the stench, and his neighbor has the right not to breathe in this odor, that makes things very simple. Either the luosifen stall moves, or if his market value is higher, he could also compensate others to move. Right? In this way, both these popular stalls would be in the hands of those who can best fulfill their value in society.”

I nodded my head excitedly and said, “Wow, my dear! You’re so smart! What you’ve just said is the essence of a famous economics theorem, the Coase theorem. The theorem states that regardless of the allocation of property rights, as long as it is clearly defined and transaction costs are sufficiently low, the optimal value of resources in society will always be realized.”

My wife has read my earlier articles on transaction costs. She said, “Yes, what’s important is not who owns the property rights, but that transaction costs are sufficiently low. Otherwise, if negotiations break down, no one will want to move, and this would spell trouble.”

Not wanting to miss out on what her parents were talking about, my daughter asked, “What if I opened my eatery first and the stall beside me wanted to sell luosifen? Would the outcome be the same?”

I replied, “Yes, it would be the same. Similarly, if you have the right not to be inundated by pungent smells, you can ask your neighbor not to open a luosifen stall. If opening a luosifen stall is more profitable, the stallholder can make a deal with you to purchase your rights. If he has the right to open a luosifen stall, and your business value is sufficiently large, you can pay to make him leave or sell something else. So, you see, the initial allocation of rights is not that important. As long as a deal can be reached, both stalls would always realize their highest value in society.”

After our little chat, we happily continued to walk around. A while later, it seemed as if my wife had further questions. She asked, “But is the hypothesis of a very low transaction cost too strict? Is it even true that such an allocation of rights exists on this street? Maybe these stalls don’t even know what rights they have in the first place!”

I was really impressed. Such concepts that nerds like me only understood after poring over countless books have been easily grasped by my wife through daily life.

I composed myself and replied, “That’s a good question. Indeed, what Coase truly cared about was precisely the world where transaction costs exist. In fact, there is a transaction system for every kind of transaction cost there is. If rights are not clearly defined, we can be sure that more time and effort would be spent on defining these rights. And these costs should also be included in the transaction costs involved. So, the Coase theorem is still pretty clear in saying that regardless of who these rights belong to, they must be clearly defined. If not, transaction fees will never be sufficiently low.”

Finding it increasingly difficult to understand me, my daughter still attempted to summarize what I said, “Daddy, in any case, the luosifen stall is still here. This means that for the time being, it must be doing well, and the decrease in value of its surrounding stalls has not caught up with the cost needed to make this luosifen shop move elsewhere. Is that right?”

As we talked, we arrived at a BBQ stall and ordered skewers and beer. One hearty meal later, we happily continued our stroll around the night market.