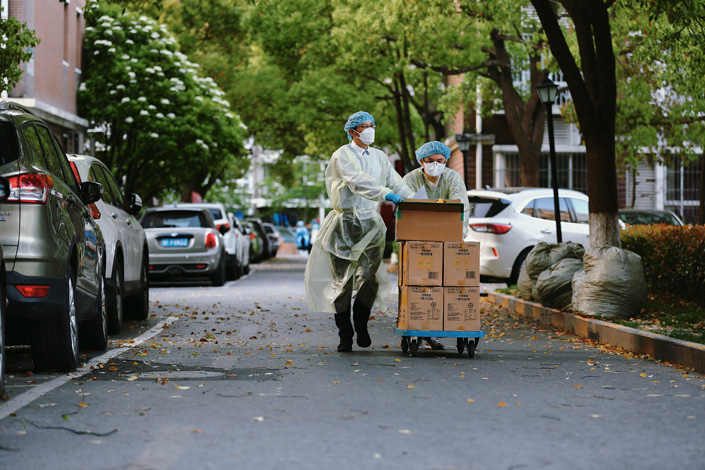 In Depth: Shanghai residents organize themselves to survive lockdown chaos

Two weeks ago, Jin Rong shared a message in her Shanghai residential community’s group chat that revealed most of their neighborhood residential committee had tested positive for Covid-19.

At that moment, Jin realized that she and the other residents who had recently volunteered to help out with the committee’s extra workload — things like organizing testing and arranging deliveries of food for locked-down residents — would now have to take over.

Jin’s team is just one of many groups that have embraced self-organization and mutual aid as the official bodies responsible for their welfare have proved unable to cope.

Electric-vehicle maker Nio Inc. joined a growing list of automakers that have suspended production in China as authorities work to contain the country’s worst Covid outbreak since early 2020.

The Shanghai-based automaker’s announcement Saturday offers the latest example of how the outbreak and the government response have disrupted the domestic auto industry’s supply chains and have threatened to hurt sales.

Overseas investors offloaded holdings of Chinese bonds at a record pace in March amid the country’s vanishing yield advantage over the U.S. and geopolitical risk concerns. But experts said they expect inflows to resume in the second quarter.

Foreign investors held 3.88 trillion yuan ($609 billion) of bonds in China’s interbank market as of the end of March ―112.5 billion yuan less than at the end of February ― according to data from China Central Depository and Clearing Co. Ltd. and Shanghai Clearing House. This was the second monthly decline since February.

More large-scale Covid lockdowns in China could cause heavy economic losses, five economists from Chinese and U.S. universities said in a recent paper.

Using real-time truck flow data within the country to measure the impact of lockdowns, the authors estimated that if the four largest cities — Beijing, Guangzhou, Shanghai and Shenzhen — underwent a full one-month lockdown, the country’s real GDP, or inflation-adjusted GDP, could fall 8.6% during that period, according to the paper published April 3.

Hong Kong will hold discussions with central government regulators on allowing Chinese mainland investors to trade Hong Kong stocks in the yuan through the stock connect program linking the two markets, according to a local official.

The move will strengthen Hong Kong’s role as an offshore yuan business hub and improve the related ecosystem in the city, Christopher Hui, the city’s secretary for Financial Services and the Treasury, said in a legislative council meeting Monday.

China’s market regulator approved national technical standards for e-cigarettes set to go into effect Oct. 1 as part of a new regulatory regime that will ban flavored vapes — including those that contain no nicotine.

The State Administration for Market Regulation released the policy document Tuesday, laying out technical rules on what counts as an e-cigarette as well as what they can contain and how they should be used.

Numbered GB41700-2022 by the regulator, the requirements represent the final piece of the puzzle in the years-long development of China’s vape management regime and will work alongside the Administrative Measures for Electronic Cigarettes, which go into effect May 1.

China, the world’s biggest importer of crude oil, may have to pay nearly $100 billion more for purchases of the fuel this year due to the surge in international prices, a jump likely to squeeze profits in downstream industries such as refining, chemical production and textiles.

That’s according to industry experts who spoke at the 2022 Oil Market Development Conference in Beijing this week.

China is currently running fewer than 3,000 passenger trains a day, which the national railway operator said is down more than 70% from “normal times,” without providing the period of comparison.