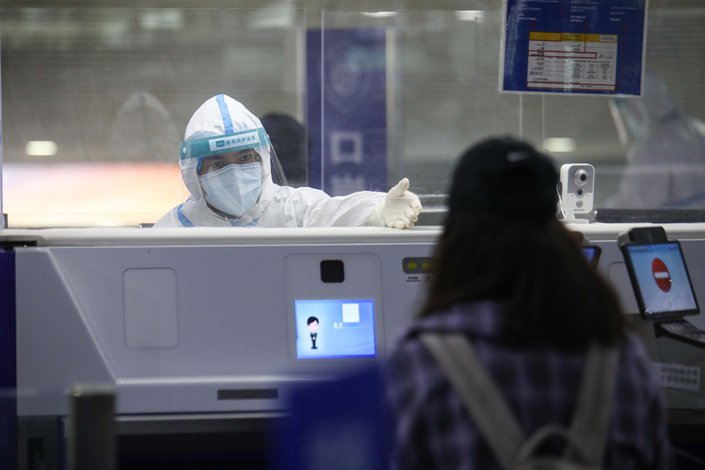 Police officers check the documents of travelers from overseas at an airport in Qingdao, East China’s Shandong province, on Oct. 2. Photo: VCG

A growing number of Chinese embassies around the world relaxed Covid-19 test requirements for local travelers flying to China, a sign that the country could be changing its attitude toward the highly transmissible omicron variant.

The U.K. and Afghanistan were among the latest to announce Thursday that they were updating the requirements for travelers heading to China from local airports, following the Chinese embassies in Italy, Greece, Switzerland, Sweden, Thailand, and the United Arab Emirates a day earlier.

Capital outflows from the Chinese interbank bond market continued for the third consecutive month in April as the vanishing yield premium over U.S. Treasurys and a weakening yuan drew foreign investors away from yuan-denominated assets.

Overseas institutional investors held 3.77 trillion yuan ($558 billion) of Chinese interbank bonds at the end of April, a reduction of 108.5 billion yuan from a month earlier, according to the latest data from China Central Depository and Clearing Co. Ltd. and the Shanghai Clearing House.

China’s commitment to opening up will not change, and the country will only open its door wider to the outside world, Chinese President Xi Jinping said Wednesday.

The president delivered the message in a video speech to celebrate the 70th anniversary of the China Council for the Promotion of International Trade and the Global Trade and Investment Summit in Beijing. China is still relatively closed in many parts of the country as it battles the worst pandemic outbreak in two years.

Premier Li Keqiang told local governments to “act decisively” on measures to support growth in the coming weeks in an effort to bring the economy back on track as soon as possible.

Everyone should “add a sense of urgency” to their actions to counter “further intensified new downward pressure” on the economy, he said Wednesday during a trip to Yunnan province in southwestern China, according to a report in the official Xinhua News Agency.

The Henan office of the CBIRC and the Zhengzhou sub-branch of the central bank have been instructed to work with local authorities on the matter, the representative said.

Shanghai speeds up customs clearance of Covid vaccines and materials

Why China’s seniors hesitate to get vaccinated

Importers have been less willing to place spot trade orders this year due to high energy prices and the impact of the Covid-19 pandemic, the GAC said. The average price of imported LNG was 4,423 yuan ($654) per ton last month, up 87% year-on-year.

Leaky $1,644 parasol from Gucci and Adidas faces backlash in China