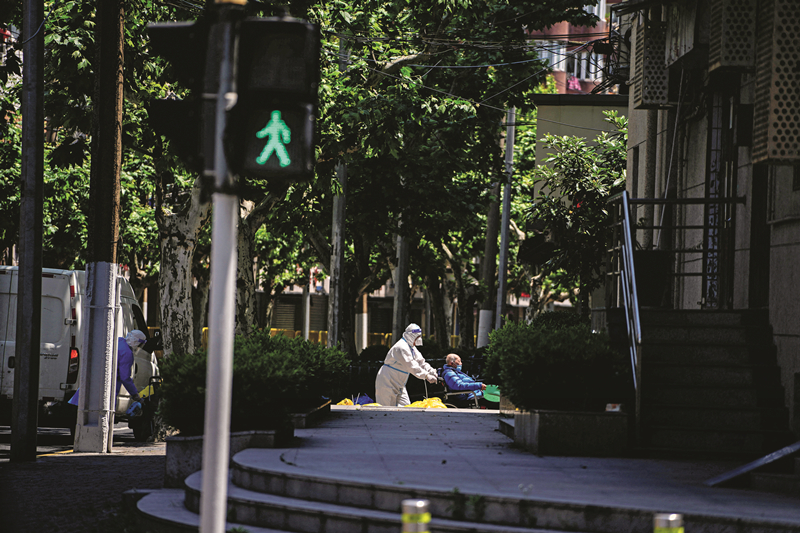 The last time Lin Shu saw his grandmother was in a video his uncle shared with the family WeChat group April 18. In the video, the 93-year-old woman lies in a nursing home bed with an oxygen tube in her nose.

A nurse at the Shanghai nursing home told his uncle the grandmother was dying, but there was no doctor available. Half an hour later, she was dead.

Amid Shanghai’s ongoing Covid-19 outbreak, the nursing home has been locked down since February with family visits banned. Lin was later told his grandmother died of a stroke. The nursing home didn’t provide any details.

Beijing authorities are investigating the death of a man who reportedly died after a hospital in the Shunyi district of the capital where he lived initially refused to treat him due to Covid restrictions, only belatedly admitting the critically ill patient when it was already too late.

Shunyi authorities said they set up a team together with the Beijing Municipal Health Commission to investigate the incident and suspended the director of a local emergency medical center, which contacted hospitals seeking treatment for the man, and other related personnel, according to a statement (link in Chinese) issued Friday.

China draws from next year’s budget for local government handouts

China’s finance ministry dipped into next year’s budget to hand over 400 billion yuan ($59.7 billion) to local governments to cover the cost of tax breaks and fee cuts designed to give businesses a break amid the country’s latest wave of Covid-19 outbreaks.

The early release of the funds originally earmarked for next year shows the lengths that the central government is willing to go to bolster local economies as major provincial-level regions experienced economic slowdowns after rolling out stringent Covid-19 measures. Some analysts have predicted that China will miss it GDP growth target for this year.

China’s top securities regulator Friday outlined a plan to add eligible exchange-traded funds (ETFs) to the stock connect programs linking Hong Kong and the mainland as part of efforts to expand access between the two markets.

The China Securities Regulatory Commission (CSRC) agreed in principle with the Hong Kong securities regulator to allow investors in the city and the mainland bourses in Shanghai and Shenzhen to trade ETFs in each other’s market following a two-month preparation period, the commission said.

More than 52,000 Kangmei investors received cash payments under the company’s reorganization plan, according to Li Chao, vice chairman of the China Securities Regulatory Commission (CSRC), at a briefing Friday.

Editorial: Gaining the upper hand in a changing global economy

As Shanghai gradually opens back up after two months of strict lockdown, China’s financial hub has rolled out dozens of policies it hopes will help bring the economy back to life.

he municipal government is aiming, in particular to prop up the property market — which was already suffering from a nationwide liquidity crisis before the outbreak began — as well as to support smaller enterprises and consumer demand.

All Shanghai businesses get green light to reopen this week

China’s best-selling electric-vehicle (EV) maker, BYD Co. Ltd., plans to increase the number of franchise dealerships in Brazil to 100 by the end of next year as it further expands into Latin America, the automaker said in a call with investors.

The Shenzhen-traded company is already working with a handful of businesses that run car dealerships in Brazil to sell its Han EV series, including GNC, Servopa SA and BCLV Comercio de Veiculos SA, which does business as Eurobike, according to the note on the meeting, which took place Friday.