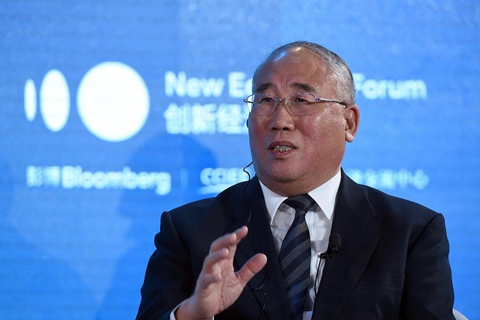 China’s climate change envoy Xie Zhenhua has for decades been at the forefront of his nation’s drive to reduce carbon emissions and protect the environment. Xie’s busy recent schedule has seen him attend the World Economic Forum in Davos at the end of May before traveling to Stockholm for the Ministerial on Climate Action (MoCA), where he sat down for an interview with Caixin.

The wide-ranging discussion covered China’s commitments to climate change measures and their implementation, Beijing’s collaboration with the U.S. on achieving emission reduction goals, and the impact of the Russia-Ukraine war on the global energy crisis.

A huge blaze broke out at the Sinopec petrochemical plant in Shanghai Saturday morning, leaving at least one dead and one injured, according to the firm and local fire department.

Videos circulating on social media showed fire engulfing the plant, which could be seen a few kilometers away, while witnesses spoke of ear-splitting explosions with huge plumes of smoke billowing into the sky.

Rumors of cryptocurrency hedge fund Three Arrows Capital being on the brink of insolvency have sent shockwaves through the crypto space, with industry observers predicting more trouble for the decentralized finance (DeFi) sphere as contagion spreads.

Three Arrows, also known as 3AC, is one of the highest-profile players in DeFi — a crypto ecosystem aiming to bypass traditional financial intermediaries through blockchain technology. With an estimated $10 billion in assets under management (AUM) in March according to blockchain analytics platform Nansen, the fund has invested in a number of crypto and DeFi firms.

China’s top insurance regulator stepped up efforts to prevent insurers’ shareholders from embezzling funds after a series of scandals revealed risks to the broader financial system.

The China Banking and Insurance Regulatory Commission (CBIRC) released a notice earlier this month that reiterated the importance of curbing illegal related-party transactions in the insurance industry — transactions between an insurer and its shareholders or any other affiliated parties.

China Minsheng Bank Thursday secured a long-awaited license to kick off business by its wholly owned wealth management unit, taking a step toward catching up with its major rivals.

The Beijing-based unit, Minsheng Wealth Management Co. Ltd., has a registered capital of 5 billion yuan ($746 million) with businesses ranging from public and private wealth management product issuance to wealth advisory and consulting, according to the bank.

The Communist Party of China issued regulations to further tighten its grip on the business activities of senior officials’ family members after a number of corruption cases highlighted shady government-business ties.

The regulations, issued by the Central Committee’s General Office, require leading cadres — including party and government officials at the bureau level and above — to accurately list the business activities of their spouse and children when declaring their personal interests every year, the state-run Xinhua News Agency reported Sunday.

As public transportation in Shanghai gradually recovers from two months of Covid lockdowns, the civil aviation industry is struggling to restore services in China’s biggest city.

Airlines in Shanghai operated in May at 1% or less of capacity before the pandemic shutdowns even as the city started to relax restrictions on inbound and outbound transportation, official data showed.

Datong Coal Mine Group Co. Ltd. has now seen three of its former chairmen fall under anti-graft investigations over the last 10 years as China’s most famous coal mining province continues its battle with corruption in the industry.

The third, Guo Jingang, 58, who had served as chairman and party secretary of the local mining giant, which is now part of Jinneng Holding Group, has been put under investigation for “serious violations of discipline and law,” a common euphemism for graft, according to a Saturday statement by the Communist Party’s Shanxi Province Commission for Discipline Inspection.